This page can be viewed at http://www.historycommons.org/entity.jsp?entity=dennis_kucinich

Positions that Dennis Kucinich has held:

Dennis Kucinich was a participant or observer in the following events:

Representative Dennis Kucinich (D-OH), an outspoken critic of the administration’s plan to invade Iraq, says: “There is no imminent threat by Iraq against the United States. Iraq does not have nuclear capabilities that anyone has been able to specifically determine, nor does it have the ability to deliver such a weapon, nor does it have the intent to do so. It could be said by Iraq that they are facing the imminent threat…. Oil is a factor. How much [of a factor] is anybody’s guess, but to discount it as a factor is, I think, to be misleading…. It’s not a conspiracy theory to bring it in because, after all, it is the second largest oil supply in the world.” (Johnson 9/16/2002) 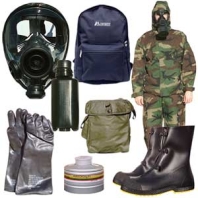 Army-issue chemical and biological protective gear. [Source: Approved Gas Masks (.com)]Defense Secretary Donald Rumsfeld responds to a request from House member Jan Schakowsky (D-IL) to certify to Congress that US troops going to Iraq “have the minimum required levels of chem/bio protective equipment” as established by the Pentagon, even as Army units are selling the same equipment on eBay (see Early March 2003). Rumsfeld says that he cannot make such a certification. (Carter 2004, pp. 58-61) The General Accounting Office has reported that up to 250,000 chem/bio suits are defective. Furthermore, the GAO reported that the Army has been aware of the problem since 1996. When asked by House member Dennis Kucinich (D-OH) about the deficiency in late 2002, Defense Department Inspector General Joseph Schmitz replied, “There is no such thing as perfect safety in warfare.” (United Press International 10/1/2002)

As Congress prepares to give the White House its requested $75 billion war supplement for Iraq, Representative Dennis Kucinich (D-OH) asks, “Why is there not a single dime for veterans’ health benefits in that $75 billion?” Kucinich also notes that the Bush administration’s cuts in veterans’ benefits will force an estimated 1.25 million veterans out of the system. Not only does the Bush administration not want to provide money for benefits, it attempts to charge veterans for health care. Congress will block the administration’s efforts to charge troops returning from Iraq a $250 fee to enroll in the VA medical plan. The administration also opposes a plan to expand health care for returning reservists and National Guard troops (the White House will drop its opposition after coming to a compromise with Congress). And the administration will implement a charge of $8 per day for each hospitalized soldier for his meals, until Congress votes to block the charge. (Carter 2004, pp. 61-65)

Congressman Dennis Kucinich (D-OH) says during a House Subcommittee on National Security meeting that, according to the General Accounting Office, many US military units are selling their protective chem/bio suits (see Late 2002) on the Internet for three dollars “while other units [are] desperately clamoring for those critical items.” Congressional investigators will find that the Army has sold 429 of the $200 protective suits on eBay for three dollars apiece. The problem goes beyond a few hundred suits. One entire military wing has “only 25 percent of the protective masks required.” The Pentagon’s Inspector General has found that 420,000 protective suits listed on inventory and intended for distribution to troops bound for Iraq cannot be found. In February, Defense Secretary Rumsfeld refused to certify that US soldiers had the proper chem/bio equipment necessary for the invasion (see February 27, 2003). (Set-Aside Alert: Federal Contract News and Information 9/6/2002; Carter 2004, pp. 57-58)

Former National Security Agency (NSA) intelligence analyst and current whistleblower Russell Tice tells the House Government Reform Subcommittee on National Security, Emerging Threats, and International Relations that he worries about what he calls a “special access” electronic surveillance program that is far more wide-ranging than the warrantless wiretapping recently exposed by the New York Times. However, Tice says he is forbidden by law to reveal specifics of the program to Congress. Tice says he believes the program violates the Constitution’s protection against unlawful search and seizures, but for him to discuss it with anyone in Congress or even with the NSA’s inspector general would violate classification laws. A spokesman for Congressman Dennis Kucinich (D-OH) says both Kucinich and committee chairman Christopher Shays (R-CT) believe that a few members of the Armed Services Committee have high enough security clearances for Tice’s information: “Congressman Kucinich wants Congressman Shays to hold a hearing [on the program]. Obviously it would have to take place in some kind of a closed hearing. But Congress has a role to play in oversight. The [Bush] administration does not get to decide what Congress can and can not hear.” In January 2006, it emerged Tice was one of the sources for the New York Times’s revelation that the NSA is engaged in possibly illegal wiretapping of American civilians as part of the war on terror (see January 10, 2006). Tice was fired from the NSA in 2005 and labeled “paranoid,” a classification Tice says was pasted on him in retaliation for his whistleblowing both inside the agency and to the public (see January 25-26, 2006). (United Press International 2/14/2006) Author James Bamford, an expert on US intelligence, says, “The congressional intelligence committees have lost total control over the intelligence communities. You can’t get any oversight or checks and balances; the Congress is protecting the White House and the White House can do whatever it wants.” (Nelson 5/15/2006)