This page can be viewed at http://www.historycommons.org/entity.jsp?entity=department_of_national_defense_1

Department of National Defense (DND) was a participant or observer in the following events: 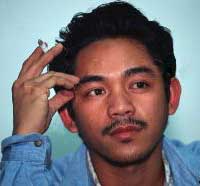 Edwin Angeles. [Source: Robin Moyer]Edwin Angeles helps found the new Muslim militant group Abu Sayyaf in the Philippines and becomes the group’s second in command and operations officer. But Angeles is actually a deep cover operative for the Philippine government and has already penetrated the Moro National Liberation Front (MNLF), a much larger rebel group that Abu Sayyaf splintered from. Angeles is the first to suggest that Abu Sayyaf take part in kidnappings, and plans the group’s first kidnapping for ransom in 1992. He will be directly involved in numerous violent acts committed by Abu Sayyaf until his cover is blown in early 1995 (see Late 1994-January 1995 and Early February 1995). (Philippine Daily Inquirer 7/10/2001) Colonel Rodolfo Mendoza, who will later lead the Philippine investigation in the Bojinka plot, is his main handler. Mendoza will later recall, “I received orders to handle him… I had the impression he was also being handled by somebody higher.” (Vitug and Gloria 2000) In 2002, one of Angeles’ wives will claim in a deathbed confession that Angeles told her he was a “deep-penetration agent” working for “some very powerful men in the DND (Department of National Defense),” the Philippine national defense-intelligence agency. (Timmerman 6/22/2002) During this time, Abu Sayyaf is very active. Philippine intelligence will later estimate that from 1991 to 1995 the group launches 67 kidnappings and violent attacks, killing around 136 people and injuring hundreds more. (Abuza 9/1/2005

Scientist Steven Hatfill, a future suspect in the October 2001 anthrax attacks (see October 5-November 21, 2001), loses his high-level Department of Defense security clearance. He had apparently misrepresented some things on his resume. He is working at a private company at this time (see 2000-2002), but no explanation is given to his employers. He is allegedly visibly angry over this. Some colleagues will later report suspicions about him to the FBI, thinking that his anger might have led him to send off the anthrax-laced letters. (Shane 7/18/2002; ABC News 8/11/2002)