This page can be viewed at http://www.historycommons.org/entity.jsp?entity=dreamworks_1

DreamWorks was a participant or observer in the following events:

November 11, 2004: Many Network Affiliates Choose Not to Show War Film for Fear of Indecency Fines 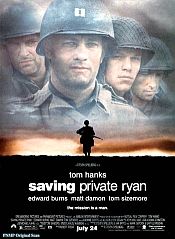 Studio poster for ‘Saving Private Ryan.’ [Source: Little Golden Guy (.com)]Sixty-six of ABC’s 225 affiliated stations choose not to air the World War II film Saving Private Ryan on Veterans Day. ABC aired the film, widely considered a homage to American soldiers, on Veterans Day in 2001 and 2002 without complaint. But with new concerns that the Bush administration, and the American electorate, is energized by a passion for “moral values” (see November 3, 2004), the stations’ executives believe they may risk fines from the Federal Communications Commission (FCC). The film opens with a graphic depiction of the famous D-Day invasion of Normandy by US, British, and Canadian forces, and the entire film contains a significant amount of profanity. The FCC could impose fines of up to $32,500 on a station if it finds the film violates moral and ethical standards. The FCC says it has received complaints, but has not yet decided to mount any sort of investigation. Many stations choosing not to air the film say that if their viewers are angry at the decision, they should call the FCC themselves. ABC spokeswoman Susan Sewell says the “overwhelming majority” of viewers are comfortable with their decision to broadcast the film. Some of the stations choosing not to air the film point to a recent FCC decision to fine CBS stations up to $500,000 for airing a Super Bowl halftime show in which entertainer Janet Jackson exposed her right breast for a moment. ABC’s contract with DreamWorks, the film studio who produced Saving Private Ryan, does not allow the network or its stations to edit the film. ABC shows an introduction by Senator John McCain (R-AZ), a prisoner of war during Vietnam. Jack Valenti, the former head of the Motion Pictures Association of America, says that he cannot imagine the FCC fining any station for showing the film: “I think that this planet would collide with Saturn before that happens.” (Associated Press 11/12/2004; BBC 11/13/2004) In 2006, author and media critic Frank Rich will write that “merely the fear of reprisals was enough to push television stations… onto the slippery slope of self-censorship before anyone in Washington even bothered to act.” Rich asks if such self-censorship might extend into these stations’, and networks’, coverage of the Iraq war: “If these media outlets were afraid to show a graphic Hollywood treatment of a 60-year old war starring the beloved Tom Hanks because the feds might fine them, toy with their licenses, or deny them regulatory permission to expand their empires, might they curry favor with Washington by softening their news divisions’ efforts to present the ugly facts of an ongoing war? The pressure groups that were incensed by both Saving Private Ryan and risque programming were often the same ones who campaigned against any news organization that was not toeing the administration political line in lockstep with Fox [News].” (Rich 2006, pp. 153-154)