This page can be viewed at http://www.historycommons.org/entity.jsp?entity=e__j__dionne_1

E. J. Dionne was a participant or observer in the following events: 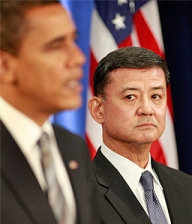 General Eric Shinseki looks on as President-elect Obama announces his choice to head the Department of Veterans Affairs. [Source: Los Angeles Times]President-elect Barack Obama selects retired General Eric Shinseki to be the new head of the Department of Veterans Affairs. Shinseki, a decorated Vietnam veteran, was the Army Chief of Staff when, months before the launch of the Iraq invasion, the US would need to send far more troops into Iraq than were allocated (see February 25, 2003). He also warned of the possibility of ethnic rivalries erupting into violent confrontations, and of the difficulties faced by a US-led reconstruction. Shinseki was ridiculed by then-Defense Secretary Donald Rumsfeld and his then-deputy, Paul Wolfowitz (see February 27, 2003). Obama now says of Shinseki, “He was right.” Obama adds, “We owe it to all our veterans to honor them as we honored our Greatest Generation,” referring to World War II-era veterans. “Not just with words, but with deeds.” The announcement is made on the 67th anniversary of the bombing of Pearl Harbor; Shinseki is of Japanese ancestry. Shinseki says, “Even as we stand here today, there are veterans who have worried about keeping their health care or even their homes, paying their bills or finding a good job when they leave the service.” He promises to run a “21st century VA.” (Pallasch 12/8/2008; Democratic National Committee 12/8/2008)
'Straight Shooter,' 'Stinging Rebuke' of Bush Policies - Responses to Shinseki’s impending appointment focus on Shinseki’s competence and the implied repudiation of Bush-era policies towards the military. Senator Patrick Leahy (D-VT) calls Shinseki “a straight shooter and truth talker,” and says that his is the kind of leadership the VA needs after what he calls years of neglect of the agency by the Bush administration. (Barre-Montpelier Times Argus 12/7/2008) The Boston Globe echoes Leahy’s characterization, calling Shinseki a “truth teller,” and writes: “The choice is a stinging rebuke not just of Rumsfeld and President Bush for failing to take Shinseki’s advice on the Iraq war, but also of the administration’s weak effort to solve the medical, educational, emotional, and employment problems that veterans are having in returning to civilian life. Just as the Bush administration thought it could oust Saddam Hussein and create a peaceful, democratic Iraq with a bare-bones force, it has tried to skimp on veterans services.” (Boston Globe 12/9/2008) And the Washington Post’s E. J. Dionne adds, “In naming Shinseki to lead the Department of Veterans Affairs, Obama implicitly set a high standard for himself by declaring that truth-tellers and dissenters would be welcome in his administration.” (Dionne 12/9/2008) The chairman of the House Veterans Affairs Committee, Bob Filner (D-CA), says that Shinseki faces a daunting task: “The stakes are high at the Department of Veterans Affairs. Our veterans need to know that their service to our country is respected and honored. A new basis of stable funding must be developed. The claims backlog must be attacked in a new and dynamic way. And the mental health of our veterans—from every conflict and each generation—must remain a high priority.” John Rowan of the Vietnam Veterans of America (VVA) believes Shinseki is up for the challenge: “We have no doubt that General Shinseki has the integrity and personal fortitude to usher in the real changes needed to make the VA a true steward of our nation’s veterans and their families. His selection certainly lives up to Mr. Obama’s promise to bring change and hope to Washington. VA bureaucrats, for whom ‘change’ is a dirty word, will learn that there really is a new game in town. Veterans of all political persuasions should take heart and applaud this choice.” (Washington Times 12/8/2008)
'Lionized by Wounded Warriors' - Thomas DeFrank of the New York Daily News writes: “By restoring to grace a retired four-star general whose career was vaporized by… Rumsfeld for daring to tell the truth, Obama has delivered a powerful symbolic statement that his government will indeed be different from the last. Shinseki’s treatment at the hands of Rumsfeld and his deputy Paul Wolfowitz is a classic of petty, meanspirited retribution.… By rehabilitating him… Obama has signaled he’s not interested in surrounding himself with toadies and yes-men. A president-elect determined to withdraw from Iraq has also helped himself with veterans. [Shinseki] is lionized by wounded warriors for his grit in persuading Army brass to let him stay on active duty after losing part of a foot in Vietnam.” (DeFrank 12/7/2008) And the New York Times writes, “It is heartening to know that [Shinseki] has been chosen to lead the agency charged with caring for America’s veterans, who deserve far better treatment than the country has given them.” (New York Times 12/9/2008)
Anonymous Criticism - One of the few sour notes is sounded by the conservative Washington Times, which quotes an anonymous “high-ranking retired officer” as saying: “How much time has he spent visiting the PTSD [post-traumatic stress disorder] wards, the multiple-amputee wards, the burn wards? The major question I have is: Just what has he done for the past five years to show any concern for our veterans? I do not see any evidence of Shinseki being an agent for change.” (Washington Times 12/8/2008)