This page can be viewed at http://www.historycommons.org/entity.jsp?entity=ed_rinke_1

Ed Rinke was a participant or observer in the following events: 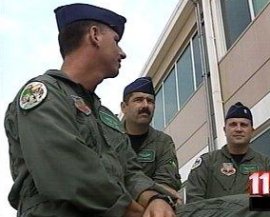 Pilots from the 180th Fighter Wing who are called to service on 9/11. [Source: WTOL]Two fighter pilots with a Toledo, Ohio, military unit that answer a call from NORAD’s Northeast Air Defense Sector (NEADS), requesting assistance in response to the morning’s attacks, respond as if they think the call is a joke. (Spencer 2008, pp. 178-179) The pilots belong to the 180th Fighter Wing of the Ohio Air National Guard, which is based at Toledo Express Airport. (GlobalSecurity (.org) 1/1/2002; WTOL 9/11/2006)
Pilot Puzzled by Call - When a weapons technician at NEADS contacts the Toledo unit, his call is answered by F-16 pilot Ed Rinke. The weapons technician says, “We need you to scramble two airplanes right now.” However, according to author Lynn Spencer, “to Rinke, the order makes no sense.” The Toledo unit “is not an alert squadron and does not report to NEADS.” Rinke is only a part-time pilot, and thinks someone more suitable should be taking the call. He shouts down the hall: “Hey, we’ve got a phone call at the duty desk. Some guy wants us to launch alert fighters!” Pilot Scott Reed responds: “What? We don’t do that!” Pushing the phone toward Reed, Rinke says: “You take it! It’s somebody on drugs.”
Second Pilot Tells NEADS It Is Calling 'the Wrong People' - After Reed takes the phone, the weapons technician repeats his request, saying, “Major Reed, we need you to scramble two airplanes.” Yet Reed sounds as baffled as Rinke had been. He answers: “You’re calling Toledo, Ohio. Do you not understand who you’re calling here? Who are you trying to call, because you are obviously calling the wrong people. This is Toledo. We don’t have any alert birds. This is Toledo. Do you understand that?”
Commander Takes Call, Orders Launch - Fortunately, the two pilots’ wing commander then takes over the call and responds to it more appropriately. Within minutes, according to Spencer, he will instruct Reed and Rinke to take off in two F-16s. Rinke reportedly thinks to himself, “Things must be really bad if NEADS is launching Toledo on an active air scramble!” (Spencer 2008, pp. 178-179) The Toledo Blade will later comment, “Toledo’s response on Sept. 11 is believed to be the first time the unit has answered a call from the North American Aerospace Defense Command.” Two 180th Fighter Wing jets will take off from the Toledo unit at 10:17 a.m., but accounts will conflict over who the pilots are (see 10:17 a.m. September 11, 2001). (Sallah and Mahr 12/9/2001; WTOL 9/11/2006; Spencer 2008, pp. 179) 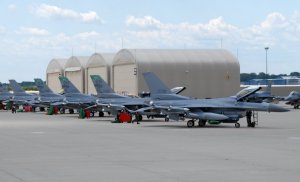