This page can be viewed at http://www.historycommons.org/entity.jsp?entity=edward_caraballo

Edward Caraballo was a participant or observer in the following events: 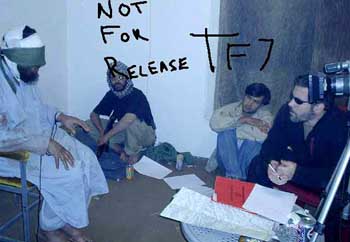 Jonathan Idema (far right) and his colleagues interrogating an Afghan. [Source: Columbia Journalism Review]Four Afghans and three Americans, Jonathan Idema, Brent Bennett, and Edward Caraballo, are convicted of running a private jail in Kabul and torturing Afghans. The Afghans are sentenced to between one and five years in prison; Idema and Bennett to 10 years; and Caraballo to eight years. They were arrested in Kabul in July on charges of kidnapping, torture, and illegal entry into Afghanistan. The US government calls Idema a bounty hunter, and the Pentagon denies any ties with the Americans. But Idema says his work was approved by Afghan and US authorities. He also tells the court the FBI is setting him up. During the trial, however, Idema fails to prove that his actions were authorized by the US authorities. An unnamed US agency gave him a passport, he alleges, and a visa similar to those furnished to US Special Forces. He also claims, “while we were not in the United States army, we were working for the United States army.” He says he had hundreds of videos, photos, and documents that could prove his claims—but they were confiscated by the FBI following his arrest. In their defense, lawyer Robert Fogelnest shows a video of the Americans suggesting they have received an official welcome in Afghanistan. In the footage, they are officially greeted by Afghan officials upon arrival in Afghanistan. One of the officials present was the Kabul police chief. (BBC 9/15/2004)