This page can be viewed at http://www.historycommons.org/entity.jsp?entity=edward_finch_cox_1

Edward Finch Cox was a participant or observer in the following events: 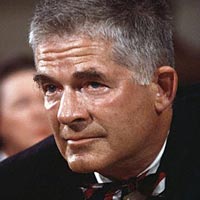 Archibald Cox. [Source: Bettmann / Corbis]Attorney General Elliot Richardson names former Solicitor General Archibald Cox as the Justice Department’s special prosecutor for Watergate. Cox is officially sworn in on May 25. (Washington Post 2008) Cox, who served in the Kennedy administration, says: “This is a task of tremendous importance. Somehow, we must restore confidence, honor and integrity in government.” Richardson says Cox’s appointment should allay suspicions that the White House will try to influence the investigation, but, “There wasn’t going to be any influence from the White House anyway.” Cox is not Richardson’s first choice for the job. Judge Harold Tyler turned the job down, not wanting to leave the bench and unsure how much independence he would truly have in conducting the investigation. Former Deputy Attorney General Warren Christopher cited similar concerns over “the requisite independence” of the position in turning down the job. Another choice, retired judge and current Wall Street lawyer David Peck, cited “urgent commitments to clients of long standing” as his reason for not taking the post; Richardson’s fourth choice, Colorado Supreme Court Justice William Erickson, was apparently never asked to take the job. Cox is not considered the best choice by Richardson because he lacks extensive experience in criminal prosecutions; Richardson intends to name a deputy for Cox who has such experience in trial work. Cox is not related to Nixon’s son-in-law, Edward Finch Cox. (Lardner 5/19/1973)