This page can be viewed at http://www.historycommons.org/entity.jsp?entity=edward_paulsen_1

Edward Paulsen was a participant or observer in the following events: 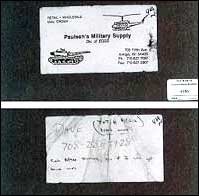 The business card Timothy McVeigh hid under his car seat. [Source: TruTV]Trooper Charles Hanger, who arrested Oklahoma City bombing suspect Timothy McVeigh (see 9:03 a.m. -- 10:17 a.m. April 19, 1995), remembers McVeigh fidgeting under the seat of his squad car after being handcuffed and placed in the front passenger seat. Hanger searches the seat and finds a business card shoved underneath. The card belongs to Paulsen’s Military Supply in Antigo, Wisconsin. On the back are notes written by McVeigh: “TNT at $5 a stick. Need more. Call after May 1.” It also has the name “David” written on it. Hanger also finds a private security badge he had taken from McVeigh; he had slipped it into his shirt pocket and forgotten about it. He turns both over to the FBI. Federal investigators will use the card to conclude that McVeigh intended to execute more bombings. Two military supply dealers, Edward Paulsen of Antigo, Wisconsin, and his son David Paulsen, of Melrose Park, Illinois, will later testify as to their possible interactions with McVeigh. (Weiner 4/29/1995; Serrano 1998, pp. 181)