This page can be viewed at http://www.historycommons.org/entity.jsp?entity=eglin_air_force_base_1

Eglin Air Force Base was a participant or observer in the following events: 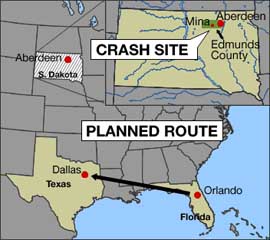 A map showing the planned flight path of Payne Stewart’s plane and the crash site location. [Source: CNN]A runaway Learjet crashes near Mina, South Dakota, after flying on autopilot for several hours. On board is champion golfer Payne Stewart, along with five others. It is believed the accident is due to a loss of cabin pressure at high altitude, which would have caused all on board to go unconscious from lack of oxygen. (Sealey 10/25/1999; Walsh and Claiborne 10/26/1999; National Transportation Safety Board 11/28/2000) After air traffic controllers lost contact with the plane, it was tracked by the Federal Aviation Administration (FAA), assisted by several Air Force and Air National Guard fighters and an AWACS radar control plane, up until when it crashed. It was also tracked on radar screens inside the National Military Command Center in the Pentagon. (McIntyre 10/26/1999) The Learjet had departed Orlando, Florida at 9:19 a.m., bound for Texas. The FAA says controllers lost contact with it at 9:44 a.m. (Walsh and Claiborne 10/26/1999) , but according to a later report by the National Transportation Safety Board (NTSB) the plane first failed to respond to air traffic control at 9:33 a.m., after which the controller repeatedly tried to make contact for the next 4 1/2 minutes, without success. (National Transportation Safety Board 11/28/2000) NORAD’s Southeast Air Defense Sector was notified of the emergency at 9:55 a.m. (9/11 Commission 7/24/2004, pp. 459) At 10:08 a.m., two F-16 fighters from Tyndall Air Force Base, Florida that were on a routine training mission had been asked by the FAA to intercept the Learjet, but never reached it. At about 10:52 a.m., a fighter from Eglin Air Force Base, Florida, was directed to within 9 miles of it, and at around 11:00 a.m. began a visual inspection of the plane. It accompanied the Learjet from 11:09 to 11:44 a.m. At 11:59 a.m., according to early accounts, four Air National Guard fighters and a refueling tanker from Tulsa, Oklahoma were told to chase the Learjet, but got no closer than 100 miles from it. However, the NTSB later claims that two Tulsa fighters were with it between 12:25 and 12:39 p.m., and were able to visually inspect it. At 12:54 p.m., two Air National Guard fighters from Fargo, North Dakota intercepted the Learjet. Soon after 1:14 p.m., it crashed in swampland, after spiraling to the ground. (Walsh and Claiborne 10/26/1999; Associated Press 10/27/1999; National Transportation Safety Board 11/28/2000) During its flight, the FAA had routed air traffic around the Learjet, and made sure no other planes flew beneath it, due to the danger of it crashing. (Associated Press 10/26/1999) There is some discussion as to what could have been done had the plane been on a collision course with a populated area, with CNN reporting, “[O]nly the president has the authority to order a civilian aircraft shot down.” Pentagon spokesman Ken Bacon says the military has no written instructions for shooting down manned civilian planes. According to a 1997 military instruction, the shooting down of unmanned objects such as missiles requires prior approval from the secretary of defense. (US Department of Defense 7/31/1997