This page can be viewed at http://www.historycommons.org/entity.jsp?entity=eiffel_tower

Eiffel Tower was a participant or observer in the following events: 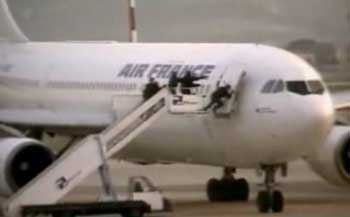 French special forces storming the hijacked Air France plane. [Source: French channel 3]An Air France Airbus A300 carrying 227 passengers and crew is hijacked in Algiers, Algeria by four Algerians wearing security guard uniforms. They are members of a militant group linked to al-Qaeda. They land in Marseille, France, and demand a very large amount of jet fuel. During a prolonged standoff, the hijackers kill two passengers and release 63 others. They are heavily armed with 20 sticks of dynamite, assault rifles, hand grenades, and pistols. French authorities later determine their aim is to crash the plane into the Eiffel Tower in Paris, but French Special Forces storm the plane before it can depart from Marseille. (Sancton 1/2/1995; Wald 10/3/2001) Time magazine details the Eiffel Tower suicide plan in a cover story. A week later, Philippine investigators breaking up the Bojinka plot in Manila find a copy of the Time story in bomber Ramzi Yousef’s possessions. Author Peter Lance notes that Yousef had close ties to Algerian Islamic militants and may have been connected to or inspired by the plot. (Sancton 1/2/1995; Lance 2003, pp. 258) Even though this is the third attempt in 1994 to crash an airplane into a building, the New York Times will note after 9/11 that “aviation security officials never extrapolated any sort of pattern from those incidents.” (Wald 10/3/2001) Some doubts about who was ultimately behind the hijacking will surface later when allegations emerge that the GIA is infiltrated by Algerian intelligence. There is even evidence the top leader of the GIA at this time is a government mole (see October 27, 1994-July 16, 1996). As journalist Jonathan Randal later relates, the aircraft was originally held at the Algiers airport “in security circumstances so suspect the French government criticized what it felt was the Algerian authorities’ ambiguous behavior. Only stern French insistence finally extracted [Algerian government] authorization to let the aircraft take off.” (Randal 2005, pp. 171)