This page can be viewed at http://www.historycommons.org/entity.jsp?entity=elijah_cummings_1

Elijah Cummings was a participant or observer in the following events: 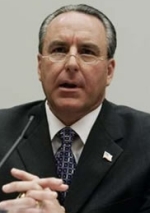 James Knodell. [Source: CommonDreams (.org)]White House Director of Security James Knodell testifies to the House Oversight Committee that the White House never investigated the possible involvement of White House officials in exposing Valerie Plame Wilson’s identity. (Think Progress 3/16/2007; Editor & Publisher 3/18/2007; Corn 3/19/2007) Knodell says he is aware of no such internal investigation or report from anyone in the White House: “I have no knowledge of any investigation in my office.” The White House Office of Security would be the lawful body to conduct such an investigation. Knodell testifies only after the White House dropped its resistance to his appearing before the committee, which had threatened to subpoena the White House for Knodell’s testimony. Representative Henry Waxman (D-CA) says that President Bush had promised a full internal probe (see September 30, 2003 and September 30, 2003), and Knodell again states he knows of no such probe. He adds that he has never talked to Bush, Vice President Dick Cheney, political strategist Karl Rove, or anyone in the White House about the Plame Wilson leak. His knowledge of the affair, he says, comes from “the press.” He tells the committee that those who had participated in the leaking of classified information are required by law to own up to this, but he is not aware that anyone, including Rove, had done that. Representative Elijah Cummings (D-MD) calls the failure of the White House to mount an internal investigation “shocking,” and says that Knodell’s office’s failure to mount such a probe constitutes a “breach within a breach.” Eleanor Holmes Norton (D-DC) calls it a “dereliction of duty.” Knodell promises to “review this with senior management.” He attempts to assert that since a criminal investigation was launched, no such internal probe was needed, but committee Democrats challenge his statement, saying that the criminal probe is narrowly focused, began only after months of inaction and stonewalling by the White House, and is required by law regardless of whatever other investigations are underway. Waxman asks, “[T]here was an obligation for the White House to investigate whether classified information was being leaked inappropriately, wasn’t there?” to which Knodell replies, “If that was the case, yes.” Committee Democrats also note that anyone who leaked information about classified information is required by law to have their security clearances denied, and ask Knodell why Rove still has such clearance. (Think Progress 3/16/2007; Editor & Publisher 3/18/2007) 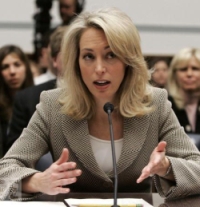 House Democrats, including Minority Leader Nancy Pelosi (D-CA), Louise Slaughter (D-NY), Rosa DeLauro (D-CT), Eleanor Holmes Norton (D-DC), Carolyn Maloney (D-NY), Elijah Cummings (D-MD), and Diana DeGette (D-CO) call upon the Republican House leadership to condemn radio host Rush Limbaugh’s attack on Georgetown University law student Sandra Fluke, who after testifying against a Republican-driven anti-contraception bill (see March 1, 2012), was vilified by Limbaugh as a “slut” and a “prostitute” (see February 29, 2012). In a press release, the Democrats say: “When Sandra Fluke testified before the House Democratic Steering and Policy Committee after Republicans attempted to silence her, she courageously spoke truth to power. As a result, today, she has been subject to attacks that are outside the circle of civilized discussion and that unmask the strong disrespect for women held by some in this country. We call upon the Republican leaders in the House to condemn these vicious attacks on Ms. Fluke, which are in response to her testimony to the Congress. Democrats will always stand up for women’s health and women’s voices.” (Pelosi 2/29/2012) Maloney tells a reporter, “I am just aghast” at Limbaugh’s attacks on Fluke. “If the far right can attack people like Sandra Fluke, women are going to be afraid to speak because they’re going to be called terrible words. It’s an attempt to silence people that are speaking out for women.” Maloney says that the Republicans’ attacks on contraception access should serve as a “wake-up call” to the women’s rights movement. “I believe these efforts are sinking in. Women have to stand up and say stop. We have to get out and get out strong to let women know around the country that they can speak out against this abuse. The right to space and time our children for our own health and the ability to manage our lives—this is a basic right, and they’re going after it.” (Bassett 3/1/2012) In a press release, Representative Judy Chu (D-CA) writes: “How dare Rush Limbaugh target Ms. Fluke with his hateful rhetoric? Her actions demonstrate a true profile in courage. His are the acts of an ignorant, hateful man who preys on misinformation and cruelty. As is always the case with Rush Limbaugh, facts are his first casualty. Ms. Fluke’s comments had nothing to do with her personal experiences or circumstances. She addressed Congress on behalf of a friend using birth control for non-sexual medical reasons. It had nothing to do with sex. It had nothing to do with Ms. Fluke. Yet Limbaugh delighted in calling her rude and inappropriate names. What’s truly sad is the fact that this man thrives on this kind of filth—it’s how he makes his living. While most Americans work hard and want only to have equal access to health insurance as part of their compensation, and while Ms. Fluke wanted only to stand up for those hardworking Americans’ right to equal access to health insurance, Limbaugh wants only to distort the truth for his ditto head audience. Where is the outrage from Congressional Republicans? Whether they like it or not, Limbaugh speaks for their party and reflects on their judgment. How can the majority party of this legislative body expect qualified witnesses to testify if such personal attacks are allowed to pass? I urge my colleagues from the other side of the aisle to stand up for what is right, and shoot down this thinly-veiled attempt at character assassination.” (Asian American Action Fund 3/1/2012)