This page can be viewed at http://www.historycommons.org/entity.jsp?entity=eric_a____rick___crawford_1

Eric A. (“Rick”) Crawford was a participant or observer in the following events:

July 14, 2011: Some Republican Lawmakers Refuse to Believe that a US Credit Default Would Damage Economy 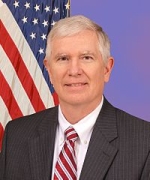 Mo Brooks. [Source: Public domain / Wikimedia]Many Congressional Republicans, particularly “tea party” freshmen, believe that not only is the Obama administration lying about the potentially catastrophic consequences of a US credit default that would follow the failure of Congress to raise the nation’s debt ceiling (see April 30, 2011, May 20, 2011, June 26, 2011, and July 11-12, 2011), but some even say that a credit default would be ultimately good for the nation. President Obama is joined by House Speaker John Boehner (R-OH), the chairman of the Federal Reserve, and Moody’s credit rating agency in saying that Congress’s failure to raise the debt ceiling by August 2 would be an economic disaster and must be avoided. But Representative Eric A “Rick” Crawford (R-AK) says otherwise. Crawford says all Obama would have to do to handle a default and the subsequent halt in US borrowing would be to use existing tax revenue to pay for what Crawford sees as “essential” federal services: the military, Medicare and Social Security, and interest on existing debt. If other government services, programs, and agencies such as the FBI, veterans’ benefits, and others would be interrupted, Crawford says that would be acceptable. “That wouldn’t work for just a few days. That would work for a few years,” he says, adding that he will not vote for a debt ceiling increase unless it is coupled with massive federal spending cuts. Budget deficits require “that we take some painful measures now. I’d rather swallow that bitter pill today.” Most of the cuts Crawford and fellow Republicans want would be in social safety-net programs, from Social Security, Medicare, Medicaid, and disability benefits to funding for education and veterans programs. Crawford and a number of House Republicans simply refuse to accept statements that economic calamity would result from a missed deadline, the Washington Post reports. That opinion, the Post says, will make raising the debt ceiling far more difficult than similar ceiling raises of previous years. Representative Mo Brooks (R-AL) says that not raising the debt ceiling would actually benefit the economy in the long run. Raising the debt ceiling, he says, just enables the federal government to spend itself into more debt. “A debt ceiling problem, as large as it is, is not anywhere near as a big or as bad as” more debt, he says. He adds that the government can continue paying creditors even if it is refused further credit. “There should be no default on August 2,” he says. “In fact, our credit rating should be improved by not raising the debt ceiling.” Most financial leaders in government and the private sector believe that the US credit rating will be dropped, perhaps significantly, if the US defaults on its debt, and the consequences of that drop could send the nation’s economy into a full-blown recession or even a depression. Even Boehner says the debt ceiling must be lifted. “Missing August 2nd could spook the [stock] market,” he says. “And you could have a real catastrophe. Nobody wants that to happen.” An Obama official recently said of legislators like Crawford and Brooks, “These are the kinds of people who get eaten by bears.” Washington Monthly editor Steve Benen writes: “The problem that plagues the nation is not about competing parties, ideologies, or creeds. It comes down to a dispute between those who believe empirical reality exists and deserves to be taken seriously vs. those who don’t. With Republican members of Congress and their supporters choosing the latter, it’s increasingly difficult to imagine the United States thriving in the 21st century.” (White 5/13/2011; Fahrenthold 7/14/2011; Benen 7/15/2011)