This page can be viewed at http://www.historycommons.org/entity.jsp?entity=eric_fjelstad_1

Eric Fjelstad was a participant or observer in the following events: 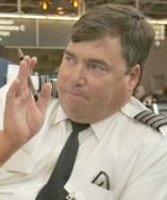 Gerald Earwood. [Source: MaryJo Walicki / Milwaukee Journal Sentinel]Just one or two minutes before it crashes into the World Trade Center, Flight 175 narrowly avoids a mid-air collision with another commercial aircraft. (Vitrano 6/25/2008) Midwest Airlines Flight 7 (Midex 7) is a DC-9 jet bound from Milwaukee to New York’s La Guardia Airport, with about 30 passengers and five crew members on board. (Daykin 6/24/2008) Pilot Gerald Earwood and co-pilot Eric Fjelstad have been concerned at the unusually slow radio responses they have been receiving from New York air traffic controllers. (Spencer 2008, pp. 56-57 and 61-62) As they are approaching La Guardia from the southwest, Earwood is again frustrated as he awaits the controller’s response to his latest transmission. (Daykin 6/24/2008)
Instructed to Turn Left - Suddenly, the voice of a panicked controller comes over the radio: “Midex 7, are you with me? Midex 7, Midex 7, are you with me?” Unknown to Earwood, controllers have noticed that Flight 175 is now flying directly at his plane at over 500 miles per hour. Earwood replies, “Midex 7 is with you out of 7 for 4,000,” meaning he has just passed through 7,000 feet in his descent to his assigned altitude of 4,000 feet. The controller orders: “Roger, Midex 7, turn left now! Head two-four-zero degrees now, as quick as you can!” The pilots of Midex 7 begin a standard 30-degrees-of-bank turn. But even though they are doing exactly what they have been ordered to, the controller continues, “Left turn, Midex, left turn!” Several seconds later, the controller restates his order: “Midex 7, tighten it up! Roll left! Now! Now! Now!” Earwood looks out of the window for the plane he is meant to be avoiding, but cannot see anything.
Narrowly Avoids Collision - As Midex 7 is completing its left turn, the controller comes back over the radio even more panicked than before, ordering: ”Roll right, Midex! Roll right as hard as you can! Keep it tight, Midex. Roll hard right! Now! Now!” Midex 7 complies with the instruction, but Earwood is wondering where the plane is that he is trying to avoid. At the FAA’s New York Center, air traffic controllers watch as the radar returns for Flight 175 and Midex 7 get so close that they appear to merge on the screens. Finally, Flight 175 continues its rapid descent toward New York, after having narrowly avoided a collision. (Spencer 2008, pp. 74-77) Midex 7 returns to its approach to La Guardia Airport, and then Earwood overhears a radio transmission from another pilot, who reports that a second plane has hit the World Trade Center. Earwood will later estimate that Flight 175 crashes into the South Tower 60 to 90 seconds after its near-collision with Midex 7. He sees the fireball coming from the tower, but does not immediately connect it with the aircraft he has just avoided. (Daykin 6/24/2008) Minutes earlier, Flight 175 almost collided with at least two other planes as it descended toward Manhattan (see (8:55 a.m.) September 11, 2001), and prior to that it had almost collided with Flight 11 (see (Shortly After 8:42 a.m.) September 11, 2001). (McKeon 9/12/2001; Lane, Phillips, and Snyder 9/17/2001) The incident with Midex 7 will not come to light until 2008, when it is described in the book Touching History: The Untold Story of the Drama that Unfolded in the Skies Over America on 9/11, by Lynn Spencer. (Vitrano 6/25/2008)