This page can be viewed at http://www.historycommons.org/entity.jsp?entity=eugene_burdick_1

Eugene Burdick was a participant or observer in the following events: 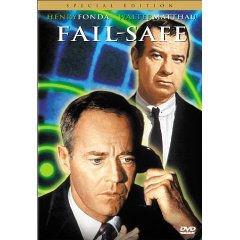 The illustration for the DVD of the 1964 film. [Source: Sony Pictures]Fail-Safe, a military thriller by Eugene Burdick and Harvey Wheeler about over-confidence in the reliability of military technology, is published at the height of the Cold War. The book’s plot hinges on a computer error sending American nuclear bombers to destroy Moscow, and the efforts of the US president and his advisers to call them back before they can complete their mission. The book notes that US military strategists believe that civilian planes as well as military planes are matters of concern, as a civilian pilot could try “hara-kiri over New-York or Montreal.” The idea of using a civilian plane to destroy a target is obviously of real concern to military planners.
Neoconservative Prototype - One distinctive character in the book is Walter Groteschele, a famous “nuclear philosopher” and anti-communist hawk who has argued that nuclear weapons are not just for deterrence but for actual use. The pre-emptive use of nuclear bombs would kills millions, he acknowledges, but the US would still win the war. Groteschele is Jewish and his hard-line views are in reaction to Jewish helplessness during the Holocaust. Jewish neoconservatives have often linked their views with the Holocaust (see Early 1970s). In the novel, Groteschele argues that the president should not attempt to call back the bombers, but should instead let them finish off the Soviets. (Burdick and Wheeler 1962)
Film Versions - In 1964, the novel will be made into a film; (Sidney Lumet 1964) in 2000, the novel will be adapted for television. (Stephen Frears 2000)