This page can be viewed at http://www.historycommons.org/entity.jsp?entity=fawn_hall_1

Fawn Hall was a participant or observer in the following events:

Fawn Hall, the secretary to National Security Council officer Oliver North, asks North if she can borrow money from him. North gives her $60 in traveler’s checks drawn on a Central American bank, and says, as Hall will later testify to Congress (see December 19, 1986): “Make sure you return—pay back the money. It is not mine.” The money is part of the illegal funds raised by North and others for the Nicaraguan Contras. (United States Court of Appeals for the District of Columbia Circuit 12/13/2007)

To facilitate the donation of funds from the Sultan of Brunei to the Nicaraguan Contras (see After May 16, 1986 and June 11, 1986), Assistant Secretary of State Elliott Abrams obtains bank account information from the National Security Council’s Oliver North, on a card typed by North’s secretary, Fawn Hall. Hall accidentally transposed two numbers in the account, resulting in the eventual transfer of the funds to the wrong account. (Final Report of the Independent Counsel for Iran/Contra Matters: Chapter 25: United States v. Elliott Abrams: November 1986 8/4/1993) 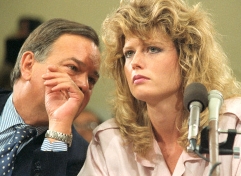 Fawn Hall and her attorney, Plato Cacheris, during her June 1987 testimony before the House-Senate Iran-Contra investigative committee. [Source: Mark Leightman / Bettman / Corbis]National Security Council (NSC) officer Oliver North, the prime coordinator of the illegal funding of the Nicaraguan Contras in the Reagan administration, leads a coordinated effort to alter, remove, and destroy critical documents that could prove criminal intent in the burgeoning Iran-Contra investigation (see November 21-25, 1986). The enormity of the destruction of government records earns the incident the sobriquet “Ollie’s shredding party.” A key figure in the document shredding is North’s secretary, Fawn Hall. Hall, whose mother Wilma was the secretary for North’s former NSC boss, Robert McFarlane, will reluctantly become one of the first, and most damning, witnesses for Lawrence Walsh’s independent investigation of the Iran-Contra affair (see December 19, 1986). Hall has been, in the words of Walsh’s prosecutors, “generally aware” of North’s involvement in both providing illegal funds to the Contras and in illegally selling arms to Iran, maintaining his records and typing his memoranda and letters. Though she knows of the illegal activities, because she did not participate in meetings or telephone conversations with other key figures in the affair, she will later be able to testify, “I did not know many of the details relevant to the Iran and Contra initiatives.” Hall’s participation in North’s “shredding party” is her first direct participation in any criminal activities surrounding the Iran-Contra affair. After North learns that the Department of Justice is opening an inquiry into the sale of arms to Iran, North secures a number of documents from NSC files showing that he had violated the Boland Amendment (see October 10, 1984) by aiding the Contras. North marks the documents with handwritten revisions, changing the text to make it seem as if North had not violated the law. He then gives the documents to Hall, asking her to retype them to include his corrections and then replace them in the files. Hall does so, but does not finish the alterations before North calls her in to help him shred documents, including notes and phone records. Hall later estimates that she and North shredded documents in piles of 12-18 pages for close to an hour, shredding in all a stack of documents almost two feet high. The shredding and alterations continue through November 23. She will later testify that she had never shredded such a large quantity of documents. (Reeves 2005, pp. 367; United States Court of Appeals for the District of Columbia Circuit 12/13/2007)

After Oliver North is fired by President Reagan over his involvement in the Iran-Contra affair (see November 25, 1986), North’s secretary Fawn Hall (who was also fired) recalls that she has not finished shredding documents that North had ordered destroyed (see November 21-23, 1986). She also realizes that other documents relating to the Iran arms sales and the Contra funding have not yet been destroyed. Hall is not allowed to remove any documents from the suite of offices used by North and other NSC officers. To avoid detection, Hall conceals documents in her clothing, inserting some inside her boots and others inside the back of her skirt. She receives the assistance of another NSC officer, Lieutenant Colonel Robert Earl, who helps her sneak documents out of the office suite. Earl also helps her adjust the documents so they cannot be seen under her clothes. During the process, Hall telephones North, who is not in the office; fearful of being overheard, she whispers to him that there is a problem with the documents and he needs to come in. He agrees, and says that he will be joined by his lawyer, Thomas Green. After Green and North arrive, the two men help shield Hall as she leaves the building with the documents hidden on her person. After the three get into Green’s car, Hall gives North the documents, and tells him that other potentially incriminating materials are still in the offices. Green drops Hall and North off in a parking lot, and, as Hall is leaving the vehicle, Green asks her what she will say if asked about the shredding. Hall replies that she will say, “We shred every day.” Green responds, “Good.” (United States Court of Appeals for the District of Columbia Circuit 12/13/2007)

Two days after sneaking classified documents out of the National Security Council (see November 25, 1986), Oliver North’s secretary, Fawn Hall, downplays the significance of the “shredding party” she and North engaged in days before, when they had worked to destroy evidence of North’s criminal activities surrounding the Iran-Contra affair (see November 21-23, 1986). When asked by Jay Stephens of the White House counsel’s office about reports of her and North shredding documents in North’s office, Hall replies as she has been coached to respond by North’s lawyer, Thomas Green. Hall later testifies, “I told him that we shred every day, and I led him to believe that there was nothing unusual about what had occurred.” (United States Court of Appeals for the District of Columbia Circuit 12/13/2007)

Oliver North’s secretary, Fawn Hall, learns that she is to be interviewed by the FBI over her knowledge of North’s illegal activities surrounding Iran-Contra (see November 21-25, 1986). She and two of North’s colleagues at the National Security Council (NSC), Lieutenant Colonel Robert Earl and Commander Craig Coy, discuss the upcoming interview. The three agree that they will not tell the FBI about Hall’s illegal removal of classified documents from NSC offices (see November 25, 1986). (United States Court of Appeals for the District of Columbia Circuit 12/13/2007)

Fawn Hall, who was NSC official Oliver North’s secretary and who helped North destroy critical documents pertaining to the Iran-Contra affair (see November 21-23, 1986), admits lying to the FBI about the removal and destruction of documents. In January, Hall told FBI investigators that she had indeed secretly removed documents from the NSC offices by hiding them in her clothes (see November 25, 1986), but had only taken out computer printouts of North’s notes. Now she admits that she secretly removed some of the original documents that North had ordered her to alter to conceal his criminal activities. (United States Court of Appeals for the District of Columbia Circuit 12/13/2007)

Fawn Hall, the former secretary to fired National Security Council officer Oliver North (see November 25, 1986), defends her illegal actions in helping North destroy evidence of his criminal activities in the Iran-Contra affair (see November 21-23, 1986). Testifying before the House and Senate, Hall says, “There are times when you have to go above the written law.” (Reeves 2005, pp. 400; United States Court of Appeals for the District of Columbia Circuit 12/13/2007)