This page can be viewed at http://www.historycommons.org/entity.jsp?entity=foreign_broadcast_information_service_1

Foreign Broadcast Information Service (FBIS) was a participant or observer in the following events: 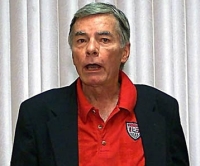 Philip Agee. [Source: Moonbattery (.com)]Philip Agee, the former CIA officer who publicly exposed a number of CIA agents in the 1970s and whose actions led to the enactment of the Intelligence Identities Protection Act of 1982, says he now opposes such activities and condemns the disclosure of CIA official Valerie Plame Wilson’s identity by senior White House officials. “I had my reasons for revealing the identities of agents and the White House had different ones,” Agee says. “However, I am now categorically opposed to making their names public.” Agee is quoted in the Greek newspaper To Vima tis Kiriakis and is later translated by the CIA’s Foreign Broadcast Information Service. (FAS Project on Government Secrecy 11/4/2005)