This page can be viewed at http://www.historycommons.org/entity.jsp?entity=frank_koza

Positions that Frank Koza has held:

Frank Koza was a participant or observer in the following events: 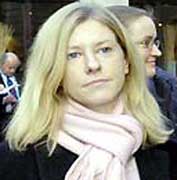 Katharine Gun. [Source: BBC]Katharine Gun, a 29-year old translator for British intelligence’s Government Communications Headquarters (GCHQ), leaks the National Security Agency memo documenting the NSA’s electronic and physical surveillance of numerous UN delegates to the Security Council (see January 31, 2003). Gun will be arrested on March 8 and charged with violating the Official Secrets Act (see March 9, 2003). Gun leaks the memo, (Davies 9/15/2004) written by the NSA’s Frank Koza and sent to several US allies via its ECHELON global surveillance system, to Britain’s Observer, which spends weeks verifying the document’s veracity before running the story on March 2. Former NSA intelligence officer Wayne Madsen, now of the Electronic Privacy Information Center, says the leak illustrates the deep unhappiness among several US allies’ intelligence agencies over US and British attempts to allege ties between Iraq and al-Qaeda. “My feeling is that this was an authorized leak,” Madsen says. “I’ve been hearing for months of people in the US and British intelligence community who are deeply concerned about their governments ‘cooking’ intelligence to link Iraq to al-Qaeda.’ While surveillance of delegates and other officials at the UN is a violation of the Vienna Convention on Diplomatic Relations, (Bright, Vulliamy, and Beaumont 3/9/2003) intelligence experts acknowledge that the US and other nations routinely conduct at least some sort of surveillance on UN members. “One would have to have the innocence of an unborn child to believe that espionage doesn’t go on every day at the United Nations,” says one such expert, Loch Johnson. “From a purist point of view, it’s unfortunate in a way, because after all, we’re the host nation for the United Nations. But the reality is, Europeans and everyone else engages in espionage in New York City, much of it focused on the United Nations.” Experts say what is unprecedented is the leak itself, especially in its timeliness and detail. (Shane and Sabar 3/4/2003)

Vietnam-era whistleblower Daniel Ellsberg, who leaked the so-called “Pentagon Papers” to the New York Times, writes in January 2004, “I can only admire the more timely, courageous action of Katherine Gun…who risked her career and freedom to expose an illegal plan to win official and public support for an illegal war, before that war had started. Her revelation of a classified document urging British intelligence to help the US bug the phones of all the members of the UN security council to manipulate their votes on the war may have been critical in denying the invasion a false cloak of legitimacy.…She did what she could, in time for it to make a difference, as indeed others should have done, and still can. I have no doubt that there are thousands of pages of documents in safes in London and Washington right now—the Pentagon Papers of Iraq—whose unauthorized revelation would drastically alter the public discourse on whether we should continue sending our children to die in Iraq.…Exposing governmental lies carries a heavy personal risk, even in our democracies. But that risk can be worthwhile when a war’s-worth of lives is at stake.” (Ellsberg 1/27/2004)