This page can be viewed at http://www.historycommons.org/entity.jsp?entity=freedom_s_phoenix_1

Freedom’s Phoenix was a participant or observer in the following events: 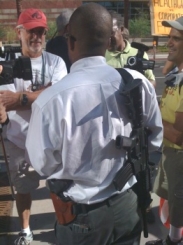 Militia member Chris Broughton stands in front of a Phoenix VFW where President Obama is speaking. Broughton wears a pistol on his hip and an assault rifle strapped to his back. [Source: Arizona Republic]Twelve anti-health care reform protesters openly carry firearms outside an event in Phoenix featuring President Obama as the main speaker. One, a man initially identified only as “Chris,” carries an AR-15 semi-automatic assault rifle strapped to his back. Carrying such weapons is legal in Arizona if the bearer has a permit to carry. Obama is speaking at the national convention of the Veterans of Foreign Wars. Outside the venue, people both supporting and opposing health care reform stage contentious, but peaceful, protests. (Faherty 8/17/2009; Sladja 8/17/2009)
'Forcefully' Opposing Will of Majority - “Chris,” interviewed by fellow protester Ernest Hancock on a home video posted on YouTube, says, “We will forcefully resist people imposing their will on us through the strength of the majority with a vote.” He also speaks against taxation: “Just because you sic the government on people doesn’t make it morally okay to steal money from people. Taxation is theft.” Asked why he is carrying a weapon, “Chris” responds: “Because I can do it. In Arizona, I still have some freedoms.” He tells Hancock that “it would be insane” not to be armed, and says he wears a gun at all times. “Chris” is asked at the beginning of the video, “You gonna water the tree of liberty?” a reference to a Thomas Jefferson quote, “The tree of liberty must be refreshed from time to time with the blood of patriots and tyrants.” He responds, “I hope not.” He also comes out “absolutely, totally against” health care reform, saying such a plan would amount to “stealing it from people.” The video is uploaded by two small Phoenix-area libertarian groups, Freedom’s Phoenix and 4409. (Sladja 8/17/2009; Sladja 8/18/2009)
Veteran: 'I Gave Them the Right' to Protest - Another anti-reform protester, Jim Mariman, identifies himself as a veteran of the Korean and Vietnam Wars, and says protesters are simply “speaking their hearts and minds.… These people can protest because I gave them the right.” (Faherty 8/17/2009)
Interview Staged by Violent Militia Supporter - Hancock, who organized “Chris’s” trip to the Obama event and interviewed “Chris” with a 9mm pistol strapped to his leg, is later shown to have close ties to members of the violent Viper Militia group convicted and jailed for plotting to blow up at least seven federal buildings in 1996 (see July 1, 1996). Hancock tells CNN that the entire event, including the “interview,” was staged and planned well in advance. He has known “Chris” for two years because of their mutual work for 2008 presidential candidate Ron Paul (R-TX). Hancock had contacted the Phoenix police two days before the event to alert them to their intent to come armed to the event. He says he was partially motivated to display his weapon because of the controversy surrounding William Kostric, who brought a pistol to a previous Obama event in New Hampshire (see August 11, 2009). CNN’s Rick Sanchez tells Hancock, “A lot of people are going to look at this and say it was a publicity stunt,” and Hancock replies, “Absolutely—you guys are so easy.” Hancock says he, “Chris,” and the 10 other armed protesters all belong to local militia groups. (Sharma 8/18/2009; Sladja 8/18/2009; MSNBC 8/20/2009) “Chris” will later be identified as Chris Broughton, a member of Tempe Baptist Church, whose pastor has repeatedly called for the divine assassination of Obama (see January 18, 2009). (Lemons 8/29/2009)