This page can be viewed at http://www.historycommons.org/entity.jsp?entity=gary_earl_johnson_1

Gary Earl Johnson was a participant or observer in the following events:

Conservative New York Times columnist David Brooks writes that the tea party movement mirrors what he calls the shift in the American public “from left to right,” and the correlation that “[e]very single idea associated with the educated class has grown more unpopular over the past year. The educated class believes in global warming, so public skepticism about global warming is on the rise. The educated class supports abortion rights, so public opinion is shifting against them. The educated class supports gun control, so opposition to gun control is mounting.… The educated class is internationalist, so isolationist sentiment is now at an all-time high, according to a Pew Research Center survey. The educated class believes in multilateral action, so the number of Americans who believe we should ‘go our own way’ has risen sharply.” Brooks, who calls himself “no fan” of the tea parties, says that the movement has “all the intensity” that once belonged to supporters of President Obama, and the movement has the power to shape American discourse and policy for the next decade. The tea party groups, he writes, define themselves “by what they are against.… They are against the concentrated power of the educated class. They believe big government, big business, big media, and the affluent professionals are merging to form self-serving oligarchy—with bloated government, unsustainable deficits, high taxes, and intrusive regulation.” The tea party movement is quite popular among independents, according to some polls, and more popular than either Obama or the US Congress. Brooks expects the movement to “be transformed” in the coming year, probably to be headed by one or another charismatic, populist lawmaker such as Marco Rubio (R-FL) or Gary Johnson (R-NM). “If they succeed,” he writes, “their movement is likely to outgrow its crude beginnings and become a major force in American politics. After all, it represents arguments that are deeply rooted in American history.” Brooks concludes: “In the near term, the tea party tendency will dominate the Republican Party. It could be the ruin of the party, pulling it in an angry direction that suburban voters will not tolerate. But don’t underestimate the deep reservoirs of public disgust. If there is a double-dip recession, a long period of stagnation, a fiscal crisis, a terrorist attack, or some other major scandal or event, the country could demand total change, creating a vacuum that only the tea party movement and its inheritors would be in a position to fill.” (Brooks 1/4/2010)

Pastor Stan Craig. [Source: Choice Hills Baptist Church]A “tea party” rally in Greenville, South Carolina, features a great deal of rhetorical violence, with one speaker telling the crowd he is ready to launch an armed assault on Washington, DC. The event is hosted by the Upcountry Conservative Coalition. The keynote speaker is former Representative Tom Tancredo (R-CO—see September 9, 2006), who tells the assemblage that Americans are “going to have to pray that we can hold on to this country.” Of President Obama, he says, “If his wife says Kenya is his homeland, why don’t we just send him back?” Tancredo is referring to widespread beliefs among the right that Obama is of Kenyan birth. It is unclear what Tancredo is referring to regarding Obama’s wife. Pastor Stan Craig of the Choice Hills Baptist Church, a Vietnam veteran, tells the crowd that he “was trained to defend the liberties of this nation,” and, apparently referring to his choice to participate in an armed insurrection, says he is ready to “suit up, get my gun, go to Washington, and do what they trained me to do.” Dan Gonzales of Florida’s Constitution Party seems to agree with Craig, saying “this is the end of America right here,” and if the tea partiers “don’t get to work we’re going to be fighting in the streets.” Gonzales seems to have little love for the Republican Party either, claiming it is owned by the Rockefeller family. Speaker William Gheen of Americans for Legal Immigration PAC (ALIPAC) continues his assertions that Senator Lindsey Graham (R-SC) is being blackmailed by the Obama administration because he is gay (see April 20, 2010), saying: “I’m a tolerant person. I don’t care about your private life, Lindsey, but as our US senator I need to figure out why you’re trying to sell out your own countrymen, and I need to make sure you being gay isn’t it.” Gheen later releases a statement reading: “US Senator Lindsey Graham is gay and while many people in South Carolina and Washington, DC, know that, the general public and Graham’s constituents do not. I personally do not care about Graham’s private life, but in this situation his desire to keep this a secret may explain why he is doing a lot of political dirty work for others who have the power to reveal his secrets. Senator Graham needs to come out of the closet inside that log cabin so the public can rest assured he is not being manipulated with his secret.” (The State 4/18/2010; Rayfield 4/19/2010) Other speakers at the event include longshot Republican presidential candidate Gary Johnson (R-NM) and “birther” author Jerome Corsi (see August 1, 2008 and After, August 15, 2008, October 8, 2008, October 9, 2008, July 21, 2009, and September 21, 2010). (The Conservatist 4/12/2010)

The John Birch Society booth displays a banner at the ‘Freedom Rally’ before the debate. [Source: Think Progress]Several prospective contenders for the Republican presidential nomination in 2012 participate in a debate in Greenville, South Carolina. The debate is presaged by a “Freedom Rally,” co-sponsored by local tea party groups, the local chapter of the far-right, implicitly racist John Birch Society (JBS—see March 10, 1961 and December 2011), and a far-right militia organization, the Oath Keepers (see March 9, 2009). The rally features speakers such as Judge Roy Moore, the former Alabama Supreme Court chief justice who lost his job after refusing to remove a Ten Commandments monument from the state judicial building, and Governor Nikki Haley (R-SC). “The change we’ve done in South Carolina can be done across the country,” Haley tells a crowd of some 200 members. “We need to change the person in the White House.” Other speakers talk about issues such as defending traditional marriage and making gold and silver legal tender in South Carolina. The JBS has been considered so extreme that until 2010, mainstream Republicans refused to countenance its involvement in their political events and campaigns (see April 19, 2010). Former Governor Tim Pawlenty (R-MN), former Senator Rick Santorum (R-PA), US Representative Ron Paul (R-TX), former Governor Gary Johnson (R-NM), and former Godfather’s Pizza CEO and radio talk show host Herman Cain take part in the debate. Paul and Johnson are libertarians; during the debate, Paul argues for the legalization of heroin, Johnson calls for the legalization of marijuana, and both call for the US to end its military involvement in Afghanistan. (Serrie 5/5/2011; Legum 5/5/2011; Tumulty and Henderson 5/5/2011) Many credit Paul with bringing the JBS back into “favor” with the Republican Party (see July 22, 2007 and August 4, 2008). Fox News host Glenn Beck has also praised the JBS in his broadcasts (see November 9-11, 2010 and After). 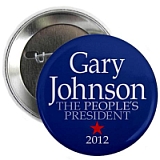 A campaign button for Gary Johnson, who bills himself as ‘The People’s President.’ [Source: Marsh Enterprises / CafePress (.com)]The third-party presidential campaign of former New Mexico Governor Gary Johnson (L-NM) accuses the Pennsylvania Republican Party of breaking the law in trying to keep Johnson off the ballot in that state. Johnson is running on the Libertarian ticket after failing to secure the Republican presidential nomination. Attorney Alicia Dearn writes a letter to the Philadelphia District Attorney’s office asking it to investigate allegations of attempted bribery and false impersonation of an FBI agent by Pennsylvania Republican Party operatives. Dearn writes in part, “Based on what I have been told by witnesses, it is my opinion that the Pennsylvania Republican State Committee has engaged in Watergate-style dirty tricks, in an attempt to keep Gov. Johnson off the ballot.” The allegations center around a private investigator, Reynold Selvaggio, allegedly hired by the Pennsylvania GOP to try to invalidate signatures submitted by the Johnson campaign. The Johnson campaign says that it submitted enough citizen signatures to obtain a place on the state ballot, a claim the Pennsylvania GOP is disputing. Dearn writes that Selvaggio either passed himself off as an FBI agent or implied that he was one (he is a retired FBI agent), and offered $2,000 to Johnson campaign volunteers in return for their testimony that they falsified signatures. Dearn also claims that Selvaggio threatened the volunteers with prosecution when they declined to cooperate. The state Republican Party calls Dearn’s allegations “baseless,” and, according to party spokesperson Valerie Caras, “This is simply a distraction from their own questionable activities.” They allege that Johnson has been working with Pennsylvania Democrats to gain signatures. Selvaggio tells a reporter: “That’s a lie. That’s completely a lie.” Dearn says she has heard similar stories from six different campaign volunteers, and writes, “Should these witness accounts indeed be true, it appears that, in order to bolster their challenge to the Johnson campaign’s candidacy, the Pennsylvania Republican State Committee or its agents sought to obtain witness testimony by unlawful means.” Johnson is on the ballot in 47 states plus the District of Columbia. Republicans in Pennsylvania have succeeded in getting tens of thousands of Johnson signatures invalidated. (Pappas 10/5/2012; Rutenberg 10/14/2012) Johnson will succeed in remaining on the Pennsylvania ballot, where state Republicans fear he will drain much-needed votes from the Republican candidate, Mitt Romney (R-MA), even though Republican National Committee (RNC) chairman Reince Priebus calls Johnson a “non-factor” in the election. The chairman of the Pennsylvania GOP, Robert Gleason, is more worried, comparing Johnson’s impact on the race to Green Party candidate Ralph Nader in 2000, when Nader drew just enough votes in Florida to mar Democrat Al Gore’s chance for victory. “This election will be close—if you remember, [former President George W.] Bush lost by only something like 143,000 votes in 2004,” he says. “So we play the game hard here.” Some pundits believe Johnson will hurt President Obama’s chances in Colorado. Republicans say that Conservative Party candidate Virgil Goode, on the ballot in Virginia and 28 other states, may also draw key votes from Romney in several states. Democrats say Johnson may draw key votes from Romney in Nevada, where polls show Romney and Obama essentially tied. (Rutenberg 10/14/2012)