This page can be viewed at http://www.historycommons.org/entity.jsp?entity=geoffrey_stokes_1

Geoffrey Stokes was a participant or observer in the following events: 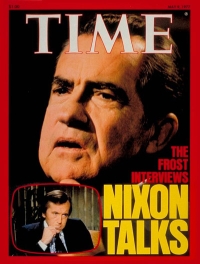 Time magazine cover from May 9, 1977 touting the Frost/Nixon interviews. [Source: Time]Former President Richard Nixon meets with his interviewer, David Frost, for the first of several lengthy interviews (see Early 1976). The interviews take place in a private residence in Monarch Bay, California, close to Nixon’s home in San Clemente. One of Frost’s researchers, author James Reston Jr., is worried that Frost is not prepared enough for the interview. The interview is, in Reston’s words, a rather “free-form exercise in bitterness and schmaltz.”
Blaming Associates, Justifying Actions, Telling Lies - Nixon blames then-chief of staff H. R. Haldeman for not destroying the infamous White House tapes (see July 13-16, 1973), recalls weeping with then-Secretary of State Henry Kissinger over his resignation, and blames his defense counsel for letting him down during his impeachment hearings (see February 6, 1974). His famously crude language is no worse than the barracks-room speech of former President Dwight D. Eisenhower, he asserts. Frost shows a film of Nixon’s farewell address to the nation (see August 8, 1974), and observes that Nixon must have seen this film many times. Never, Nixon says, and goes on to claim that he has never listened to or watched any of his speeches, and furthermore had never even practiced any of his speeches before delivering them. It is an astonishing claim from a modern politician, one of what Nixon biographer Fawn Brodie calls “Unnecessary Nixon Lies.” (Reston 2007, pp. 81-91) (In a 1974 article for Harper’s, Geoffrey Stokes wrote that, according to analysis of transcripts of Nixon’s infamous Watergate tape recordings by a Cornell University professor, Nixon spent nearly a third of his time practicing both private and public statements, speeches, and even casual conversations.) (Stokes 10/1974)
Nixon Too Slippery for Frost? - During the viewing of the tape, Nixon’s commentary reveals what Reston calls Nixon’s “vanity and insecurity, the preoccupation with appearance within a denial of it.” After the viewing, Nixon artfully dodges Frost’s attempt to pin him down on how history will remember him, listing a raft of foreign and domestic achievements and barely mentioning the crimes committed by his administration. “What history will say about this administration will depend on who writes the history,” he says, and recalls British prime minister Winston Churchill’s assertion that history would “treat him well… [b]ecause I intend to write it.”
Reactions - The reactions of the Frost team to the first interview are mixed. Reston is pleased, feeling that Nixon made some telling personal observations and recollections, but others worried that Frost’s soft questioning had allowed Nixon to dominate the session and either evade or filibuster the tougher questions. Frost must assert control of the interviews, team members assert, must learn to cut Nixon off before he can waste time with a pointless anecdote. Frost must rein in Nixon when he goes off on a tangent. As Reston writes, “The solution was to keep the subject close to the nub of fact, leaving him no room for diversion or maneuver.” (Reston 2007, pp. 81-91)