This page can be viewed at http://www.historycommons.org/entity.jsp?entity=gerald_d__fines_1

Gerald D. Fines was a participant or observer in the following events: 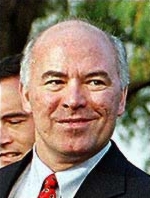 Larry Mackey. [Source: Washington Post]Lawyer Larry A. Mackey, the lead prosecutor in the trial of accused Oklahoma City bombing conspirator Terry Nichols (see 8:35 a.m. - 9:02 a.m. April 19, 1995 and August 10, 1995), is profiled by the New York Times. Mackey played what the Times calls “a major, though low-profile role in the first Oklahoma City bombing trial” of Nichols’s co-conspirator Timothy McVeigh (see June 2, 1997), and delivered the closing argument in that trial (see May 30, 1997). Mackey had not planned on being involved in the Nichols trial, but honored a request from Attorney General Janet Reno to head the prosecution. McVeigh’s lead lawyer Stephen Jones calls Mackey “very professional,” and says: “He honors his word. If he tells you something, you can bank on it.” Former US Attorney Gerald D. Fines says of Mackey, “He is the most thorough and best-prepared lawyer I have seen in the government or private practice.” (Thomas 11/1/1997)