This page can be viewed at http://www.historycommons.org/entity.jsp?entity=german_american_bund_1

German-American Bund was a participant or observer in the following events: 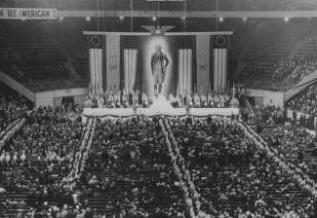 A photo of the February 1939 Bund rally in Madison Square Garden. The backdrop depicts President George Washington. [Source: US Holocaust Museum]The German-American Bund, the most influential pro-Nazi movement in the US prior to World War II, holds a rally in New York City’s Madison Square Garden that attracts some 20,000 participants. The rally is to protest for the rights of white Gentiles, whom the organization calls the “true patriots” of America. The Bund is led by Fritz Kuhn, an outspoken anti-Semite; at its height, the organization boasts some 25,000 members along with 8,000 “Storm Troopers.” Although the group portrays itself as patriotic Americans, even combining images of George Washington and the Nazi swastika, almost all of the members are German immigrants with ties and/or allegiances to Hitler’s Nazi movement. Public opinion polls show Kuhn is considered the most prominent anti-Semite in the nation. The party has little support outside of a few large cities. Shortly after the rally, Kuhn is investigated, found to have close ties to Germany’s Nazi Party, and eventually jailed for embezzling funds from the organization, causing many members to depart. In December 1941, the US government will outlaw the organization. (The Holocaust Chronicle 2009; US Holocaust Museum 2010; US Holocaust Museum 2010)