This page can be viewed at http://www.historycommons.org/entity.jsp?entity=gretchen_carlson_1

Gretchen Carlson was a participant or observer in the following events:

Roger Ailes, the founder and chairman of Fox News (see October 7, 1996), makes a joke to an audience of news executives: “It is true that Barack Obama is on the move,” he says. “I don’t know if it’s true that President Bush called [Pakistani President Pervez] Musharraf and said, ‘Why can’t we catch this guy?’” The joke is a deliberate conflation between the names of presidential candidate Barack Obama (D-IL) and Osama bin Laden. Ailes has Steve Doocy and the other hosts of his network’s morning news show Fox and Friends begin making similar jokes. Fox insiders will later note that while the banter between Doocy, Brian Kilmeade, and Gretchen Carlson appears to be mostly ad-libbed, it is actually highly structured; Ailes uses the show as one of the primary vehicles to get his daily message into what reporter Tim Dickinson will call “the media bloodstream.” Ailes meets with Doocy, Kilmeade, and Carlson every day before the 6:00 a.m. start; a former Fox News deputy will later say: “Prior to broadcast, Steve Doocy, Gretchen Carlson—that gang—they meet with Roger. And Roger gives them the spin.” Doocy is the first Fox News figure to publicly state that Obama attended a radical Islamist madrassa as a child, a falsification that begins circulating on the Internet around this same time (see October 1, 2007). (Sherman 5/22/2011) 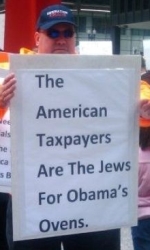 A ‘tea party’ protester carries a sign during a Chicago rally. [Source: Huffington Post]Fox News devotes much of its day’s coverage to the conservative, anti-tax “tea parties” taking place around the nation. The network has promoted the tea parties in the previous weeks (see April 6-13, 2009, April 15, 2009, and April 15, 2009). Fox hosts Glenn Beck, Neil Cavuto, Sean Hannity, and Greta Van Susteren all provide extensive live coverage from the sites of separate events, which the network promotes as “FNC [Fox News Channel] Tax Day Tea Parties” (see October 13, 2009). Many of the network’s shows, such as America’s Newsroom, Beck’s show, and others provide on-air and online information about the times and locations of events, and broadcast interviews with event organizers. Beck tells his viewers they can “[c]elebrate with Fox News” at any of four “FNC Tax Day Tea Parties.” Beck, who is at San Antonio’s Alamo for an event (see April 15, 2009) tells his audience: “If you can’t make the one in San Antonio, please go to the one with Neil or with Sean in Atlanta, that’s supposed to be great, Greta is in Washington, DC. Just get out and let your face be seen.” Hannity encourages viewers to send in their “Tax Day Tea Party” videos for on-air broadcast. Cavuto’s guest host in the studio, Stuart Varney, says plainly, “It’s now my great duty to promote the tea parties.” Fox News’s Web site, “Fox Nation,” actively promotes the events, with links to blogs, maps, videos, and event calendars. The network even hosts its own “virtual tea party” on its Web site. Fox host Gretchen Carlson suggests that viewers hang teabags from their cars’ rearview mirrors, “like fuzzy dice.” Fox Business anchor Cody Willard tells viewers to “figh[t] the fascism” of the current administration by attending a “tea party.” He asks his viewers, “Guys, when are we going to wake up and start fighting the fascism that seems to be permeating this country?” He adds that in his opinion, conservatives and liberals are “both fascists who are taking my money and building up corporate America with my welfare.” And Fox Business anchor David Asman advises his viewers to buy “tea party” merchandise. The push is successful: after the April 15 protests, many mainstream news outlets report that Fox News reports helped drive crowds to protests. CNN and Washington Post media critic Howard Kurtz will say, “I don’t think I’ve ever seen a news network throw its weight behind a protest like we are seeing in the past few weeks with Fox and these tea parties.” (Media Matters 9/11/2009)

Fox News commentators mock the idea of using insects to torture prisoners, as was revealed in recently released Justice Department torture memos (see April 16, 2009). Mike Huckabee (R-AR), the former governor of Arkansas and a 2008 presidential candidate who now has his own talk show on Fox, says, “Look, I’ve been in some hotels where there were more bugs than these guys faced.” Huckabee goes on to characterize the Obama administration’s version of prisoner interrogation, saying, “We’re going to talk to them, we’re going to have a nice conversation, we’re going to invite them down for some tea and crumpets.” Huckabee’s fellow commentators Gretchen Carlson and Steve Doocy join in the hilarity. (Media Matters 4/17/2009; Media Matters 4/21/2009)

Progressive media watchdog organization Media Matters documents a number of instances where conservative commentators twist the words of House Speaker Nancy Pelosi (D-CA) and Steny Hoyer (D-MD) into accusations of “calling Americans Nazis” or accusing citizens of being “un-American.” Hoyer and Pelosi wrote an op-ed in USA Today saying that for groups of corporate-sponsored protesters to disrupt and prevent open debate on the topic of health care reform was un-American (see August 10, 2009). Apparently the “Nazi” accusation comes in part from recent allegations by Rush Limbaugh that Pelosi and other Democrats have used Nazi accusations of their own (see August 6, 2009) and have, themselves, adopted Nazi symbology and precepts (see August 6, 2009).
MSNBC's Scarborough - MSNBC host Joe Scarborough, a former Republican congressman, says on his show, “[O]n the left, you’ve got a speaker calling Americans un-American for going to town hall meetings and accusing them of carrying swastikas in there.” Scarborough goes on to say that it is not right to counter right-wing accusations and disruptions “by calling your opponents Nazis.”
Fox News Anchor - Fox News anchor Gregg Jarrett says, “First of all, in the beginning, Pelosi sort of suggested that any American citizen who dared voice an objection in a protest is a Nazi, apparently based on one isolated incident.” Former George H. W. Bush speechwriter Peggy Noonan wrote that Pelosi called protesters “Nazi-like.”
Wall Street Journal Columnist - Wall Street Journal columnist James Taranto echoed Noonan, writing that Pelosi “insinuated that they [protesters] are Nazis,” and added that Nazi analogies are “far more common on the left than the right.” Limbaugh said flatly that Pelosi “is saying the people who oppose this are Nazis.”
Washington Times Op-Eds - The Washington Times says that Pelosi is “misleading” in asserting that protesters were “carrying swastikas.” Instead, the Times writes, “Closer examination [of the protest signs being carried at the town hall forums and rallies] revealed that in every case, the symbol was being used as a warning against the arrogance of power of which Mrs. Pelosi has become emblematic.” Citizen journalist Andrew Breitbart, in a Washington Times editorial, says that Pelosi “blatantly lied and said that the protesters were wielding ‘swastikas and symbols like that.’” The Wall Street Journal called Pelosi “completely clueless” for saying that anyone carried Nazi symbols to protests. Taranto wrote that Pelosi was suffering from “a fevered imagination” in seeing swastikas at protests and rallies. (Media Matters 8/11/2009)
Fox Hosts - Fox News hosts Gretchen Carlson and Steve Doocy tell their viewers that Hoyer and Pelosi called protesters “un-American.” Carlson says, “Some lawmakers are outright canceling the town halls now, and Nancy Pelosi says anyone who speaks out is un-American.” Doocy says moments later: “Of course, going back to Nancy Pelosi saying that apparently the opposing view to her view is un-American, that’s our text question this hour. Is it un-American to debate health care?” (Media Matters 8/10/2009)
Protests of Nazi Rhetoric - The Anti-Defamation League, a Jewish organization, has protested the use of Nazi symbols and rhetoric both by anti-health care reform protesters and by conservative commentators (see August 7, 2009).

On Fox News’s morning show Fox and Friends, “expert” commentator Shibani Joshi of Fox Business tells viewers that the reason Germany has had so much success with its solar power industry is that it gets a great deal more sunlight than America does. In reality, Germany gets comparatively little sunlight, comparative to Alaska, the US state that gets the least amount of annual direct solar energy. Neither Joshi nor any of the hosts on the show mention Germany’s long governmental support of solar energy development and its backing of green technology research and development. Host Gretchen Carlson and her fellow hosts deride the Obama administration’s “failed” solar subsidies, with Carlson saying: “The United States simply hasn’t figured out how to do solar cheaply and effectively. You look at the country of Germany, it’s working out great for them.” The future of America’s solar industry, Carlson asserts, “is dim.” She then asks Joshi: “What was Germany doing correct? Are they just a smaller country, and that made it more feasible?” Joshi replies: “They’re a smaller country and they’ve got lots of sun. Right? They’ve got a lot more sun than we do.… The problem is it’s a cloudy day and it’s raining, you’re not gonna have it.” A few American states like California get a relatively plentiful amount of sunshine, Joshi says, and experience some success with generating energy from sunlight, “but here on the East Coast, it’s just not going to work.” Slate reporter Will Oremus will later write: “Gosh, why hasn’t anyone thought of that before? Wouldn’t you think that some scientist, somewhere, would have noticed that the East Coast is far less sunny than Central Europe and therefore incapable of producing solar power on the same scale? You would—if it were true.” According to the US Department of Energy’s National Renewable Energy Laboratory (NREL—see 1977), almost the entire continental US gets more sunlight than the sunniest region of Germany. NREL scientist Sarah Kurtz tells Oremus, “Germany’s solar resource is akin to Alaska’s.” According to an NREL map, the American Southwest is one of the best places in the world to generate solar power, and all of the continental US with the possible exception of the Puget Sound region in Washington state gets far more sunlight than anywhere in Germany. (Oremus 2/7/2013; Greenberg 2/7/2013) Four days later, Joshi will admit she is wrong. In a post on Fox News’s blog, she will write: “I incorrectly stated that the chief difference between the US and Germany’s success with solar installations had to do with climate differences on a Fox and Friends appearance on Feb. 7. In fact, the difference come down more to subsidies and political priorities and has nothing to with sunshine.” She will then continue to deride solar energy as a minor element in a “divers[ified] energy portfolio,” and will claim that natural gas obtained via “fracking” is a better and more reliable source of energy for the next century. (Joshi 2/11/2013)