This page can be viewed at http://www.historycommons.org/entity.jsp?entity=hank_krakowski

Positions that Hank Krakowski has held:

Hank Krakowski was a participant or observer in the following events:

At the United Airlines crisis center, at its headquarters outside Chicago, staff members watch Flight 93’s radar track until the plane crashes. United Airlines’ senior management has started to gather in the theater-like crisis center, a room that resembles NASA’s Mission Control. Although the airline still has hundreds of flights in the air, officials have highlighted only Flight 93’s path on the large Aircraft Situation Display screen. Even after the plane’s transponder has been switched off (see (9:40 a.m.) September 11, 2001), the flight can still be tracked, but officials can no longer determine its altitude. They watch as the plane’s speed fluctuates wildly while it heads toward Washington. Hank Krakowski, United Airlines’ director of flight operations, will later recall: “We knew what was going on. We could see the airplane headed toward the capital. We were wondering whether the military was going to intervene or not.” Those in the crisis center see Flight 93’s radar track stop moving at the time it crashes. A dispatcher determines the latitude and longitude of its last position and reports that it was south of Johnstown in Pennsylvania, about 120 miles from Washington. (Mccartney and Carey 10/15/2001; Longman 2002, pp. 77-78 and 214; Adams, Levin, and Morrison 8/13/2002) 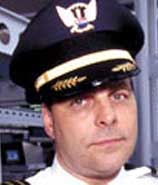 Hank Krakowski. [Source: Unisys]After seeing Flight 93’s radar track stopping over Pennsylvania, a senior United Airlines official contacts an airport in that area and receives confirmation of what appears to be an airplane crash nearby. Along with other United Airlines managers, Hank Krakowski, United’s director of flight operations, has just been watching Flight 93 on a large screen in the crisis center at the airline’s headquarters, outside Chicago (see (9:36 a.m.-10:06 a.m.) September 11, 2001). A dispatcher has determined the plane’s last position was south of Johnstown, Pennsylvania, so Krakowski tries phoning the Johnstown airport. However, due to an apparent power failure, there is no reply. He has to call the airport manager’s cell phone number. He asks the manager: “We might have a plane down in your area there. See anything unusual?” The manager reports a black smoke plume visible about 30 miles to the south of the airport. Krakowski thinks, “We just watched one of our airplanes crash.” (Longman 2002, pp. 214; Adams, Levin, and Morrison 8/13/2002) Therefore, by 10:15 a.m. according to the 9/11 Commission, United Airlines headquarters has “confirmed that an aircraft [has] crashed near Johnstown, Pennsylvania, and [it] believed that this was Flight 93.” (9/11 Commission 8/26/2004, pp. 47)

It is initially reported that Flight 93 was traveling fairly slowly when it crashed on September 11. Days after the attacks, the New York Times reports that Flight 93 “slammed into the ground at a speed that law enforcement authorities said might have approached 300 miles an hour.” (Longman and Thomas 9/14/2001) Another newspaper reports, “Flight 93 slammed into the earth nose-first at over 200 mph, according to estimates by the National Transportation Safety Board and other experts.” (Billington 9/16/2001) However, by 2002 it is being reported that the plane crashed going nearly 600 mph. (Longman 2002, pp. 212) “It could have even broken the sound barrier for a while,” says Hank Krakowski, who was United Airlines’ director of flight operations on September 11. (Longman 3/27/2002) The design limits of the plane are 287 mph when flying below 10,000 feet. (Longman 2002, pp. 208)