This page can be viewed at http://www.historycommons.org/entity.jsp?entity=health_and_education_project_international_1

Health and Education Project International was a participant or observer in the following events:

January 1996-September 10, 2001: Canada Takes No Action Against Founding Al-Qaeda Leader, Despite Evidence Against Him 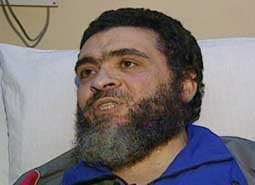 Ahmed Said Khadr in a hospital bed during his hunger strike, being visited by journalists. [Source: Canadian Broadcasting Corporation]In late 1995, Ahmed Said Khadr is arrested in Pakistan for a suspected role in the November 1995 bombing of the Egyptian embassy in that country (see November 19, 1995). Khadr was born an Egyptian and became a Canadian citizen, and is an employee of Human Concern International (HCI), a Canadian-based charity. (Burr and Collins 2006, pp. 276-277)
Smuggling During the Afghan War - The Canadian government was already aware of Khadr’s militant ties before the bombing. In the late 1980s, a federal Canadian official was asked by a diplomat in Pakistan about Khadr. The official did not know who that was, so the diplomat explained that Khadr was involved in smuggling Saudi money into Afghanistan while using HCI as a cover. This person further said that, “For months, the Afghan scene in Islamabad buzzed with this and other information” about Khadr. This was passed on to other parts of the Canadian government, but no action was taken. (Bell 9/6/2002)
Khadr Released Due to Hunger Strike - After his late 1995 arrest, Khadr begins a hunger strike from within a Pakistani prison. In January 1996, Canadian Prime Minister Jean Chretien visits Pakistan and, in response to popular pressure caused by the hunger strike, asks the Pakistani government to release him. Khadr is released several months later. He returns to Canada and stops working with HCI, but starts a new charity called Health and Education Project International. (Burr and Collins 2006, pp. 276-277)
HCI Linked to Al-Qaeda - A January 1996 CIA report claims that the entire Peshawar, Pakistan, HCI branch that Khadr heads is staffed by Islamist militants and that its Swedish branch is smuggling weapons to Bosnia (see January 1996). In a June 1996 interview with an Egyptian weekly, Osama bin Laden surprisingly identifies HCI as a significant supporter of al-Qaeda. (Emerson 2006, pp. 398, 423)
Monitoring Khadr's Associates - Also around 1996, the Canadian intelligence agency CSIS begins monitoring several suspected radical militants living in Canada. The CSIS will later call one of them, Mahmoud Jaballah, an “established contact” of Khadr. (Canadian Security Intelligence Service 2/22/2008

) Another, Mohamed Zeki Mahjoub, will also be called a contact of Khadr. (Canadian Security Intelligence Service 2/22/2008

) The CSIS has yet to reveal details of when such contacts are made, except in the case of Mohamed Harkat. It will be mentioned that in March 1997 Harkat is recorded saying that he is about to meet Khadr in Ottawa, Canada. (Canadian Security Intelligence Service 2/22/2008

)
Wanted Again in Pakistan - On September 5, 1998, the Globe and Mail will report that Khadr is wanted in Pakistan again for his role in the Egyptian embassy bombing. A Pakistani official says that Khadr is living in Afghanistan, has contacts with Osama bin Laden, and is using his charity as a cover for smuggling and banking transactions. The executive director of HCI tells the newspaper that Khadr was last seen in Ottawa, Canada, about three months earlier, and, “We do learn once in a while that he was in Pakistan or Canada or moving back and forth.” (Stackhouse 9/5/1998)
Listed by UN - In January 2001, the United Nations places Khadr on a list of those who support terrorism associated with bin Laden. (Canadian Security Intelligence Service 2/22/2008

)
But despite all this, there is no evidence the Canadian government attempts to arrest or even indict him before 9/11. (The Egyptian government does pressure the Pakistani ISI to capture him in the summer of 2001 (Summer 2001).) Khadr will be killed in Pakistan in October 2003. It will eventually emerge that he was a founding member of al-Qaeda and an important leader of that group (see October 2, 2003).