This page can be viewed at http://www.historycommons.org/entity.jsp?entity=heritage_front_1

Heritage Front was a participant or observer in the following events:

May 22 - October 11, 1996: Paul Admits Authorship of Newsletters, Accuses Opponent of ‘Gutter-Level Politics’ by Publicizing Them 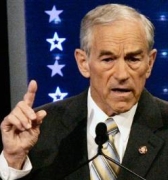 Ron Paul. [Source: Think Progress]Representative Ron Paul (R-TX) takes full credit for the racist, homophobic, and anti-Semitic content featured in his newsletters (see 1978-1996), and says that he writes the material. Paul, on his own and through his campaign staffers, denies that the content is actually racist, saying that the material as quoted in the press is taken “out of context.” Paul’s opponent for his House seat, Charles “Lefty” Morris (D-TX), has released some of the newsletter material to the Texas press, prompting Paul to accuse him of “name-calling,” “race-baiting,” “political demagoguery,” and “gutter-level politics.” Morris says of Paul’s statements: “Many of his views are out on the fringe.… His statements speak for themselves.” The NAACP has also questioned Paul’s stance on race; a Texas NAACP spokesman says of Paul, “Someone who holds those views signals or indicates an inability to represent all constituents without regard to race, creed, or color.” Paul repeatedly denies being a racist, and says to “selectively quote” from his newsletters is “misrepresentation.” He says that articles in his newsletters that claim “95 percent of the black males” in Washington, DC, “are semi-criminal or entirely criminal,” that “it is hardly irrational… to be afraid of black men.… Black men commit murders, rapes, robberies, muggings, and burglaries all out of proportion to their numbers,” that blacks only commit “crimes that terrify Americans,” and other such claims are not his beliefs, but “assumption[s] you can gather” from reports on crime; he also claims that civil rights leaders such as Jesse Jackson have made similar claims. A 1992 claim that “[o]pinion polls consistently show that only about 5 percent of blacks have sensible political opinions” is Paul’s work, says campaign spokesman Michael Sullivan, but the issue is political philosophy, not race: Sullivan says Paul does not believe that people who disagree with him are sensible. Sullivan goes on to say: “You have to understand what he is writing. Democrats in Texas are trying to stir things up by using half-quotes to impugn his character. His writings are intellectual. He assumes people will do their own research, get their own statistics, think for themselves, and make informed judgments.” His newsletter’s name-calling of Representative Barbara Jordan (D-TX) as “Barbara Morondon” and its claim that she is the “archetypical half-educated victimologist” whose “race and sex protect her from criticism,” a “fraud,” and an “empress without clothes” is merely an attempt to portray Paul’s “clear philosophical difference” with her. He does not deny a 1993 accusation that Representative Jack Kemp (R-NY) “made a pass at a female reporter young enough to be his daughter.” Nor does he deny a number of newsletter items offering to help readers avoid paying taxes to the IRS and supporting violent attacks on IRS offices, though Sullivan says such claims were written in an “abstract” sense. Paul also says he has no idea why he is listed in a directory by the Heritage Front, a Canadian-based neo-Nazi group, which lists his newsletter under the heading “Racialists and Freedom Fighters.” (Camia 5/22/1996; Bernstein 5/23/1996; Welch 1/11/2008)