This page can be viewed at http://www.historycommons.org/entity.jsp?entity=hilary_rosen_1

Hilary Rosen was a participant or observer in the following events: 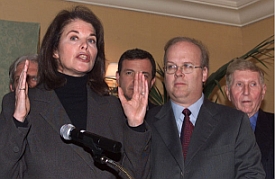 Paramount’s Sherry Lansing at a 2001 meeting to discuss the media’s role in battling terrorism. She is flanked by Walt Disney CEO Robert Iger, Karl Rove, and CBS owner Sumner Redstone. [Source: Fred Rouser / Reuters]Shortly after the 9/11 attacks, a group of senior media executives meet repeatedly with White House officials, including top political strategist Karl Rove, to discuss ways that the entertainment industry can help improve America’s image in foreign markets. The gathered officials discuss the use of “soft power”—using the influence of American movies and television shows to sway public opinion, especially among Muslim and Arab populations. Television producer Bryce Zabel, the chairman of the Academy of Television Arts and Sciences, says in a memo that the US must regard itself like a consumer brand: “Products like Coca-Cola are far more effectively branded around the globe than the United States itself. The American entertainment and communications industry has the technological and creative expertise to improve relations between our country and the rest of the world.” Hilary Rosen, the chairwoman of the Recording Industry Association of America (RIAA) and a participant in the meetings, recalls in 2008 that Rove and other White House officials wanted support similar to that provided by Hollywood to the US government during World War II. “They wanted the music industry, the movie industry, the TV industry to produce propaganda,” she will recall. “Rove was putting a lot of pressure on us.” A 2008 New York Times report will conclude, “There were few tangible results from the meetings.” Harvard professor Joseph Nye, who coined the term “soft power” in 1989, will observe in 2008: “[W]hat’s interesting about the last eight years is that polls show a decline in American attractiveness.… But then you ask the follow-up questions and you see that American culture remains attractive, that American values remain attractive. Which is the opposite of what the president has said—that they hate us for who we are and what we believe in.” (Arango 11/30/2008)