This page can be viewed at http://www.historycommons.org/entity.jsp?entity=homestead_air_reserve_base_1

Homestead Air Reserve Base was a participant or observer in the following events:

November 10-12, 1972: Hijackers Threaten to Crash a Plane into a Nuclear Facility in ‘the Most Chilling Domestic Hijacking in US History’

Before September 11, 2001: Fighters Regularly Launch within Minutes of Scramble Order in Response to Suspicious Aircraft 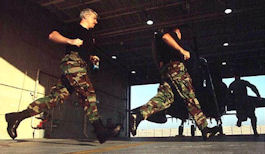 Florida Air National Guard crew chiefs and a pilot scrambling to an F-15 during an alert drill at Homestead Air Reserve Base. [Source: Airman]Fighter jets that are scrambled by the North American Aerospace Defense Command (NORAD) in response to suspicious or unidentified aircraft in US airspace are able to take off within minutes of receiving a scramble order, in the years preceding 9/11. (McKenna 1/1996; Dennehy 9/15/2001; Spencer 2008, pp. 117) NORAD keeps a pair of fighters on “alert” at a number of sites around the US. These fighters are armed and fueled, ready for takeoff. (Arnold 4/1998; Hebert 2/2002; Kelly 12/5/2003) Even before 9/11, the fighters are regularly scrambled to intercept errant aircraft (see 1990-2001). (General Accounting Office 5/3/1994, pp. 4; Associated Press 8/14/2002)
Pilots Stay Close to Their Aircraft - Pilots on alert duty live near to their fighters, so they will be ready for a prompt takeoff if required. Author Lynn Spencer will write that pilots on alert duty at Langley Air Force Base in Virginia “live, eat, and sleep just steps from jets.” (Spencer 2008, pp. 117) According to Major Martin Richard, a pilot with the 102nd Fighter Wing at Otis Air National Guard Base in Massachusetts, “Every day” at his base, “365 days a year, 24 hours a day, at least two fighter pilots and four maintenance personnel ate, slept, and lived nestled adjacent to three fully loaded F-15 jets.” (Richard 2010, pp. 8)
Fighters Can Get Airborne in Minutes - The fighters on alert are required to be in the air within minutes of a scramble order. General Ralph Eberhart, the commander of NORAD on 9/11, will tell the 9/11 Commission that they “have to be airborne in 15 minutes.” (9/11 Commission 6/17/2004) Richard will write that the objective of the alert pilots at his base is “to be airborne in 10 minutes or less if the ‘horn’ went off.” (Richard 2010, pp. 8) According to other accounts, fighters on alert are generally airborne in less than five minutes. Airman magazine reports in 1996 that NORAD’s alert units “work around the clock, and usually have five minutes or less to scramble when the warning klaxon sounds.” (McKenna 1/1996) A few days after 9/11, the Cape Cod Times will report that, “if needed,” the fighters on alert at Otis Air Base “must be in the air within five minutes.” (Dennehy 9/15/2001) According to Spencer, pilots on alert duty at Langley Air Force Base are “always just five minutes away from rolling out of the hangars in their armed fighters.” (Spencer 2008, pp. 117) Captain Tom Herring, a full-time alert pilot at Homestead Air Reserve Base in Florida, says in 1999, “If needed, we could be killing things in five minutes or less.” (McKenna 12/1999) In 1994, NORAD is planning to reduce the number of alert sites in the continental United States and, according to a report published that year by the General Accounting Office, “Each alert site will have two fighters, and their crews will be on 24-hour duty and ready to scramble within five minutes.” (General Accounting Office 5/3/1994, pp. 16)
'Everything Else Just Stops' following Scramble Order - Once an order to scramble is received, alert pilots try to get airborne as quickly as they can. According to Richard, being a pilot sitting on alert is “akin to being a fireman.” Richard will later recall that when the horn goes off, signaling for him to get airborne, “no matter where I was or what I was doing, I had to swiftly don my anti-g suit, parachute harness, and helmet, run to the jet where my maintenance crew was waiting, fire up the powerful jet engines, and check all of the systems while simultaneously talking with the Otis command post who had a direct feed from NEADS [NORAD’s Northeast Air Defense Sector]. When the horn blew, a frantic, harrowing race into a high pressure situation ensued.” (Richard 2010, pp. 8) Herring says: “We go full speed when that klaxon sounds and people know not to get in front of us, because we take scrambles very seriously.… We’re fired up about what we do and we’re the best at what we do.” (McKenna 12/1999) Technical Sergeant Don Roseen, who keeps the alert fighters at Tyndall Air Force Base in Florida ready for instant takeoff, says in 1999 that these fighters are “hot and cocked, they are ready.” Roseen says that when the klaxon goes off, “everything else just stops.”
Suspicious Aircraft 'Could Be a Terrorist' - When they are taking off, pilots may be unaware exactly why they are being scrambled. Major Steve Saari, an alert pilot at Tyndall Air Force Base, says: “There are several different things you could run into and you don’t know until you’re airborne. And sometimes you can’t tell until you have a visual identification.” Saari says: “The unknown [aircraft] could be something as simple as a lost civilian or it could be somebody defecting from Cuba. It could be a terrorist or anything in-between.” (Filson 3/1999) According to Airman magazine, the unidentified aircraft might be “Cuban MiGs, drug traffickers, smugglers, hijackers, novice pilots who’ve filed faulty flight plans, or crippled aircraft limping in on a wing and a prayer.” (McKenna 12/1999)
Intercepted Aircraft Could Be Shot Down - Fighters can respond in a number of ways when they intercept a suspect aircraft. In 2011, Jeff Ford—at that time the aviation and security coordinator for the NORAD and USNORTHCOM Interagency Coordination Directorate—will say that before 9/11, scrambled fighters can “intercept the aircraft, come up beside it, and divert it in the right direction toward an airfield or find out what the problems are in order to assist.” (Doscher 9/8/2011) According to MSNBC: “[I]nterceptors can fly alongside a plane to see who’s flying it. They can also try to force it off course. Once it is apparent that it is not following directions, it might be forced over the ocean or to a remote airport—or even shot down.” (Arnot 9/12/2001) On September 11, 2001, NEADS will scramble fighters that are kept on alert in response to the hijackings (see 8:46 a.m. September 11, 2001 and 9:24 a.m. September 11, 2001). (Wald and Sack 10/16/2001; 9/11 Commission 7/24/2004, pp. 20, 26-27)