This page can be viewed at http://www.historycommons.org/entity.jsp?entity=howard_metzenbaum_1

Howard Metzenbaum was a participant or observer in the following events: 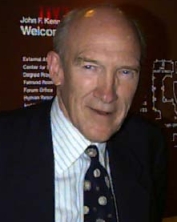 Alan Simpson. [Source: Britt Bolen]A delegation of US senators meets with Iraqi dictator Saddam Hussein to deliver a message from President Bush. The delegation is led by Robert Dole (R-KS) and includes Frank Murkowski (R-AK), Jim McClure (R-ID), Alan Simpson (R-WY), and Howard Metzenbaum (D-OH). The senators are joined by US Ambassador to Iraq April Glaspie, her deputy Joseph Wilson, and various embassy staffers. Dole delivers the message from Bush: Iraq must abandon its chemical and biological weapons programs and stockpiles, and, in return, the US will continue working to improve relations between the two countries (see July 27, 1990 and July 25, 1990). In response, Hussein says he is not trying to destabilize the region and work against US interests. As part of his statement, he says: “I didn’t really say I was going to set fire to half of Israel (see April 1990). What I said was that if Israel attacks me, then I will set fire to half of Israel.” Hussein insists he will only take action against Israel if his country is attacked first, but such a response will be swift and overwhelming, with his new WMD playing a central role. He also protests against what he calls US and British efforts to contain Iraq by scaling back economic and commercial programs, and what he calls a Western smear campaign against him and his government. When the other senators are given a chance to speak to Hussein, Wilson is struck by Metzenbaum’s response. “Mr. President, I can tell you are a honorable man,” Metzenbaum says. Wilson later writes, “I remember thinking to myself that whatever beneficial impact the president’s message and Dole’s statement may have had on Saddam, it had all just been negated by this obsequious boot-licking.” Simpson joins Metzenbaum in stroking Hussein, bending forward so low from his chair that he looks as if he is on bended knee and telling the dictator: “Mr. President, I can see that what you have here isn’t really a policy problem; what you have is a public relations problem. You’ve got a problem with the haughty and pampered press. I know all about that, because I’ve got problems with the press back home. What you need is you need a good public relations person.” Wilson will write: “Saddam no doubt took from the meeting not the admonition to stop developing weapons of mass destruction and threatening his neighbors, but rather support for his own misguided belief that he was an honorable man who didn’t really have policy problems at all, just clumsy relations. After all, one of Israel’s champions had told him so, and another American leader had knelt before him to reassure him that he had no problems with the American government.” (Wilson 2004, pp. 95)