This page can be viewed at http://www.historycommons.org/entity.jsp?entity=iraq_veterans_against_the_war_1

Iraq Veterans Against the War (IVAW) was a participant or observer in the following events:

A peaceful antiwar press conference and demonstration in Lafayette Square near the White House is broken up by a phalanx of mounted police officers, who charge the podium, forcibly disperse the participants, and arrest three people on unspecified charges. “The police suppressed the press conference,” says Brian Becker, national organizer for the Act Now to Stop War and End Racism (ANSWER) antiwar coalition organization. “In the middle of the speeches, they grabbed the podium…. Then, mounted police charged the media present to disperse them.” The crowd, of some twenty journalists and four or five protesters, “scatter in terror,” according to a journalist at the scene. Three people are arrested: Tina Richards, whose son served two tours of duty in Iraq; Adam Kokesh, a leader of Iraq Veterans Against the War (IVAW); and ANSWER organizer lawyer Ian Thompson. The small press conference was designed to help prepare for a much larger antiwar demonstration scheduled for September 15. The conference and demonstration may have been broken up over an issue of paste. In August, Washington, DC authorities threatened ANSWER with a $10,000 fine if it didn’t remove posters it had put up throughout the city announcing the September 15 march. The reason: ANSWER used an adhesive that doesn’t meet city regulations. Becker later says that the organizers are actually demonstrating to journalists that the paste they use conforms to city regulations when the police charge. Becker says, “At our demonstration today we were showing the media that the paste we use conforms to the rules. One of our activists was making a speech when the police barged in and grabbed the podium. At that point, Tina Richards started to put up a poster, so they arrested her and two others.” Becker calls the police dispersal a “strategy of suppression” against antiwar demonstrators. ANSWER’s protest is scheduled to coincide with the release of a much-anticipated report on Iraq by US military commander General David Petraeus. (Agence France-Presse 9/6/2007) 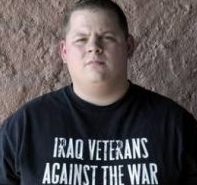 Brandon Neely. [Source: Associated Press]A former Guantanamo guard, Specialist Brandon Neely, discusses his experiences with MSNBC talk show host Rachel Maddow. He also gives a lengthier interview to the Guantanamo Testimonials Project, run by the Center for the Study of Human Rights in the Americas at the University of California at Davis. Neely was at Guantanamo when the first prisoners arrived in January 2002, and stayed for some six months before being transferred. Later, he served in Iraq. Neely says he is still haunted by the memories of what he saw during his time at Guantanamo. Neely, who was honorably discharged from the Army in 2008, is the president of the Houston chapter of Iraq Veterans Against the War (IVAW).
'I Was Ready for Revenge' - When he learned that he was being assigned to Guantanamo, as he recalls, “We were told… these people would not fall under the Geneva Convention.” Neely says that from the outset, he and the other guards were trained to be very adversarial towards the detainees: “We were just told from the get-go that these were the guys who planned 9/11, that these are the worst people in the world.… I was ready for revenge. I was angry. I was ready to go to war.” He recalls the day that the first detainees arrived (see January 11, 2002-April 30, 2002). When they arrived, Neely was startled: “Most of them were small, underweight, very scared, and injured. I was expecting these people to come off that bus looking like vicious monsters.”
Fear of Execution Provoked Resistance - Neely recalls one physical incident between himself and an older prisoner that happened the first day. When the prisoner resisted being forced to his knees, Neely slammed him to the cement floor; other guards “went ahead and hog-tied him.” The next day, as Neely recalls: “I could see on the side of his—side of his face, he was all scraped up and bruised.… And I later learned from other detainees the reason that he moved and he jerked away from us was when we placed him on his knees, he thought we were going to execute him.” However, his fellow guards were pleased, saying, “Man, that was a good job; you got you some.” Neely witnessed other physical abuses, including one instance when a prisoner was beaten by a medic for refusing to drink a can of Ensure. Neely later learned that the prisoner believed the Ensure to have been poisoned. He also witnessed a detainee beaten unconscious for calling a female guard a “b_tch.” Guards sometimes called prisoners “sand n_ggers.” Guards sometimes told detainees that their villages or countries had been bombed and their families were all dead. Sometimes the guards told prisoners that they could be executed at any time.
Lack of Respect for Religious Beliefs - Neely knows of at least one incident where a guard, searching a prisoner’s cage, threw the prisoner’s Koran to the floor, provoking outrage among the detainees. Neely says the guard swore that he threw the Koran aside without thinking. Other incidents were more deliberately provocative: loud rock music or the national anthem would be played during the morning call to prayer; soldiers would mock and ridicule prisoners during their worship services, soldiers would blast praying detainees with water and call the incidents accidents; prisoners were fed pork, a proscribed food, without being informed of what they were eating.
David Hicks: Humanizing the 'Monsters' - Neely spent a good amount of time talking with Australian detainee David Hicks (see December 2000-December 2001). Hicks repeatedly insisted that he had been in Afghanistan fighting well before the Americans arrived, and that he would never fight Americans. He told Neely that he had been captured by Northern Alliance forces while trying to leave the country, and his captors sold him to the Americans for $1,500. Neely recalls: “Hicks did not come across as the cold-blooded killer that we were told all these guys were. He was a normal guy like me.… During these times is when I really started to look at the detainees as real people and not just monsters, as I had been told they were.”
'Trial and Error' - Neely says: “There was no standard operating procedures as far as how a detainee camp was supposed to be run. There was kind of like a trial-and-error period, if this didn’t work, we’ll try this way one day—you know, just everyday was something different until they thought it was right.” He tells The Independent: “As far as the Geneva Conventions, we touched very shortly on that in training. Most of what people knew about them was from their own readings.” (MSNBC 2/17/2009; Ojeda 2/18/2009)
Conclusion - Neely says: “I think everyone can agree that, at Guantanamo Bay, Cuba, there are some really bad people. And there are a lot of good people there as well. But—innocent, guilty, black, white, Muslim, or Jew, no matter what you are—there is no excuse to treat people in the manner that I and other people did. It’s wrong and just downright criminal, and it goes against everything the United States of America stands for.” (Ojeda 2/18/2009)