This page can be viewed at http://www.historycommons.org/entity.jsp?entity=irina_khakamada_1

Irina Khakamada was a participant or observer in the following events: 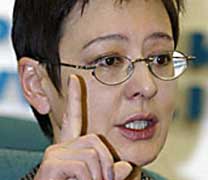 Irina Khakamada. [Source: Associated Press]Irina Khakamada, a leading liberal, pro-Western candidate for the Russian presidency, accuses Putin’s government of possible involvement in terrorist attacks blamed on Chechen rebels. The Los Angeles Times reports, “The implication of Khakamada’s accusations was that in both the 2002 theater crisis and the 1999 apartment bombings, authorities backing Putin may have wanted to see Russian citizens die and Chechen fighters painted as terrorists to boost support for military action in Chechnya and enhance the get-tough leader’s popularity.” Khakamada, a member of the anti-Putin Union of Right Forces party, says “there are a lot of suspicious things” about the 1999 apartment bombings and calls for an independent investigation. “This is a feature of real democracy, especially when it comes to investigations connected with actions of officials and special services,” she says. (She will earn 3.9 percent of the vote.) (Holley 1/19/2004; Walsh 3/11/2006)