This page can be viewed at http://www.historycommons.org/entity.jsp?entity=jaber_khalil_1

Jaber Khalil was a participant or observer in the following events:

The Baghdad Museum is evacuated and locked by its curators, who anticipate Baghdad being overrun by American troops within the next few hours. The last three on the grounds are the director, Dr. Jaber Khalil; the director of the State Board of Antiquities, Donny George; and the curator in charge of the museum’s collections, Dr. Nawala al-Mutawalli. They are forced to flee the grounds because Iraqi militiamen have sought cover around the museum, and they fear a firefight. The entire area is under US control by April 9; by April 10, the Army has left the area without posting guards. George pleads for the Army to return to prevent looting, but is ignored. Much of the looting that ravages the museum’s collection takes place on April 12 (see April 13, 2003). The international outcry against the looting is so fierce that the Army will begin posting guards on April 16. (Bloom 6/23/2003) 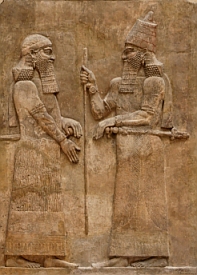 A panel from the ancient and priceless ‘Treasure of Nimrod,’ originally believed to be stolen but later restored to the National Museum. [Source: Zeenaraqi (.com)]UPI columnist John Bloom delves into the mystery of the looted antiquties from Baghdad’s National Museum. Curators and archaologists report over 170,000 antiquties and artifacts either stolen or destroyed, and massive damage done to the building itself (see April 8-12, 2003 and April 13, 2003). On the other hand, General William Wallace has claimed that “as few as 17 items were unaccounted for” (see May 7, 2003). After some research, Bloom claims that virtually everyone involved in the affair is lying to some degree, and, he writes, “the reporters on the scene have been played for patsies.”
Mystery Man - Apparently, Bloom finds, the controversy centers on Donny George, who is officially the director general of research and study for the State Board of Antiquities. George is not the director of the museum; that position is filled by Dr. Jaber Khalil, who “is never quoted in Western news accounts,” Bloom reports. Instead, George became the museum spokesman early in the occupation. He is also a liar, according to Bloom. Reporters say that George gave them the 170,000 figure on or around April 13. George says he never made such a claim. There were 170,000 pieces in the entire collection, he says, but he has no idea how many were stolen or vandalized. The story has become politicized, Bloom writes, somewhat in the US and far more so in Britain, where war critics have seized on the story as evidence of the lack of respect the Pentagon has for the culture of a nation it has seized. The Pentagon calls the museum a military outpost for Saddam Hussein’s Republican Guard, and its pillaging an understandable reaction from the Iraqi people who hated Hussein and his Ba’athist thugs. After the April looting, archaeological expert Dan Cruikshank, who works for the BBC, attempted to piece together a picture of what exactly was and was not taken. He divided the museum into three main areas:

The galleries themselves. Most of the looting and vandalism took place here. But the galleries had been cleared of much of their valuables. Curators had been planning for this months in advance, having gone through looting after the 1991 Gulf War. They feared both citizen thieves and vengeful Kuwaitis traveling with the US troops. They hid the smaller items, leaving behind only antiquities that could not be stolen without mechanical equipment. Somewhere between 17 and 50 major items were either stolen or vandalized; another 15 items sustained major damage.

The museum offices and conservation rooms, where the safes, keys, and equipment are kept. These areas were heavily looted, but mostly of modern equipment such as computers, fax machines, and copiers.

Five secret storerooms known only to the curators. These are reinforced, locked vaults located in various places throughout the museum. Here is where most of the museum’s treasures were hidden away. Experts who visited the museum after the April looting found that three had not been opened, including one room stuffed with tens of thousands of Greek and Roman gold coins. One had been opened with a key, indicating an inside job. The fifth had been broken into and some items stolen.
Squirreled Away - George was one of the first and loudest of lamenters on April 13, blaming US soldiers for their indifference and lamenting the museum that had been, in Bloom’s description, “overrun by a ravenous horde.” However, George kept a few facts to himself. One, he put the most prized possessions of the museum into a secret vault; only George himself knows where that vault is. Two, many museum staff members took items home to protect them. Three, most of the gold items, including 600 historically priceless pieces of jewelry from the Treasure of Nimrod, are safe in a vault underneath the Iraqi Central Bank. They have been there since the days of the Iran-Iraq war. Four, at least one of the secret storerooms was found to have housed not only antiquities, but parts of a machine gun, an unexploded hand grenade, and a rocket-propelled grenade. The room itself has slit windows giving an excellent field of fire for the street below. This discovery gives some truth to the Army’s contention that its soldiers had taken fire from the museum.
Playing Both Sides - Bloom moves into the realm of admitted speculation in trying to divine George’s underlying motivation. He believes George, who held high rank in the Ba’athist regime, wanted to play his cards close to his chest until he could be sure how everything was going to settle out, not offending either the US occupiers or the Ba’athists, who might, as happened in 1991, end up remaining in power. He also believes George wanted to protect valuable artifacts that had disappeared from the museum long before the war. He wonders if George was collaborating with Saddam Hussein, defending the museum against the depredations of the notoriously rapacious Hussein family (who had no compunctions about selling treasures on the international market), or perhaps both.
Planned Burglary - Bloom and Cruikshank both believe that during the April 12 looting, the same people who plundered the museum in years past came back to steal one more time. Five of the most valuable items were snatched, smuggled out of the country apparently through Damascus, Syria, and sold on the black market in Tehran and Paris. Bloom writes: “That’s what stolen-to-order means. They had lined up buyers in Europe long before the war broke out.” Bloom and Cruikshank also cannot figure out how two of the most valuable artifacts—a 4,500-year-old alabaster relief vase and a 4,250-year-old bronze statue—were stolen. “It would have taken, at the least, a block and tackle, a hoist, and a pickup to get them out of the museum.” Did no one see any of this? Bloom asks.
Real Losses - It seems clear that several thousand antiquities and valuables were indeed looted. The latest figure, from UNESCO and the US Customs Service, hovers around 2,000 to 3,000, notwithstanding the claims of General Wallace. Bloom notes, “Even if the losses are limited to 50 priceless items and 3,000 lesser items, that’s still the most significant robbery of antiquities in living memory.” John Russell of the Massachusetts College of Art said in late May: “It’s only by comparison with the most dire initial reports that said everything was gone that it seems not so bad. Yes, not everything is gone, but major things are.” Other sites suffered worse depredations—the archaelogical digs at Larsa, Nineveh, Hatra, Mosul, Babylon, and the Sumerian city of Umma, among others. Bloom writes: “Lost in all the claims and counter-claims about who was responsible, who was lying, and what was done or not done, was the fact that the whole affair was based on a libel against the Iraqi people—that they would destroy their own citadel of history. It would be the equivalent of thousands of Americans rampaging through the Smithsonian Institution like cannibals.” Cruikshank says flatly, “It is simply not true that the people of Baghdad looted their own museum.” (Rich 6/1/2003; Bloom 6/23/2003)