This page can be viewed at http://www.historycommons.org/entity.jsp?entity=jack_grandcolas__1

Jack Grandcolas was a participant or observer in the following events: 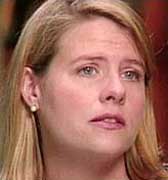 Lyz Glick. [Source: NBC]In phone calls made from Flight 93, some passengers and crew members sound as if they are able to keep surprisingly calm, despite the crisis:

Passenger Lauren Grandcolas calls her husband, Jack, at 9:39, and leaves a message on the answering machine. According to journalist and author Jere Longman, “It sounded to Jack as if she were driving home from the grocery store or ordering a pizza.” Jack Grandcolas later says, “She sounded calm.” He describes, “There is absolutely no background noise on her message. You can’t hear people screaming or yelling or crying. It’s very calm, the whole cabin, the background, there’s really very little sound.” (Longman 2002, pp. 128; Kate Solomon 2006; Segal 4/26/2006)

Passenger Mark Bingham speaks on the phone with his mother and aunt, reportedly from around 9:42. His aunt finds him sounding “calm, matter-of-fact.” His mother later recalls, “His voice was calm. He seemed very much composed, even though I know he must have been under terrible duress.” She also says the background discussion between passengers, about taking back the plane, sounds like a “calm boardroom meeting.” (CNN 9/12/2001; Longman 2002, pp. 129-130; Hirschkorn 4/21/2006)

Passenger Todd Beamer speaks with GTE supervisor Lisa Jefferson for 13 minutes, starting at 9:45. Jefferson later says that Beamer “stayed calm through the entire conversation. He made me doubt the severity of the call.” She tells Beamer’s wife, “If I hadn’t known it was a real hijacking, I’d have thought it was a crank call, because Todd was so rational and methodical about what he was doing.” (Beamer and Abraham 2002, pp. 211; Jefferson 2006)

Passenger Honor Elizabeth Wainio speaks with her stepmother, Esther Heymann, from around 9:54. Heymann later tells CNN that Wainio “really was remarkably calm throughout our whole conversation.” (However, according to Jere Longman, although she speaks calmly, Wainio’s breathing is “shallow, as if she were hyperventilating.”) When her stepdaughter is not talking, Heymann reportedly cannot “hear another person. She could not hear any conversation or crying or yelling or whimpering. Nothing.” (Longman 2002, pp. 168 and 171-172; CNN 2/18/2006)

Flight attendant Sandy Bradshaw calls her husband at 9:50. He later says, “She sounded calm, but like her adrenaline was really going.” (Cannon 10/21/2001)

At 9:58, flight attendant CeeCee Lyles phones her husband. He later says, “She was surprisingly calm,” considering the screaming he heard in the background. Her relatives attribute her calmness to her police training (she is a former police officer). (Lyles 9/11/2001; Townsend, Brown, and Fraley 9/17/2001; Tsuruoka 4/18/2002)
Longman later writes, “I heard tapes of a couple of the phone calls made from [Flight 93] and was struck by the absence of panic in the voices.” (Longman 2002, pp. xi)

Lauren Grandcolas. [Source: Family photo / AP]At 9:39 a.m., Flight 93 passenger Lauren Grandcolas calls her husband in San Rafael, California, leaving him a 46-second message on the answering machine. (Pittsburgh Post-Gazette 10/28/2001; 9/11 Commission 8/26/2004, pp. 42; US District Court for the Eastern District of Virginia, Alexandria Division 7/31/2006) Some reports state that she is using a cell phone. (Houston Chronicle 9/12/2001; Chicago Tribune 9/14/2001; USA Today 9/25/2001) But the Pittsburgh Post-Gazette says she uses an Airfone. (Pittsburgh Post-Gazette 10/28/2001) Her husband, Jack Grandcolas, later describes that she sounds “very, very calm.” (Cohen 9/12/2001) According to some early reports, she says, “We have been hijacked,” and “They”—presumably meaning the hijackers—“are being kind.” (Houston Chronicle 9/12/2001; Goldstein and Thompson 9/12/2001; Chicago Tribune 9/14/2001; Tyrangiel, Orecklin, and Poniewozik 9/16/2001) But in other accounts, she does not specify that her plane has been hijacked. She reportedly begins, “Honey, are you there? Jack, pick up sweetie. Okay, well I just wanted to tell you I love you. We’re having a little problem on the plane.” She continues, “I’m comfortable and I’m okay… for now. Just a little problem. So I just love you. Please tell my family I love them too. Bye, honey.” According to some accounts, Grandcolas then passes the phone to fellow passenger Elizabeth Wainio, who is sitting next to her, and tells her to call her family. (Wilgoren and Wong 9/13/2001; Pittsburgh Post-Gazette 10/28/2001; Longman 2002, pp. 128; Pauley 9/11/2006) The Wall Street Journal reports that Grandcolas’s voice can be heard at the end of her recorded message saying to another passenger, “Now you call your people.” (Zaslow 5/26/2005) Yet, according to a summary of passenger phone calls presented at the 2006 trial of Zacarias Moussaoui, this could not be the case, as Grandcolas tries to make a further seven calls over the following four minutes. These are apparently either unsuccessful or quickly disconnected, lasting between “0 seconds” and “7 seconds.” They appear to include four more attempts at calling her husband, and one attempt to call her sister Vaughn Lohec. According to the summary, Wainio does not make a phone call until later, at just before 9:54 a.m. The summary also claims that, although Wainio and Grandcolas had originally been assigned seats next to each other in row 11, they are now in different parts of the plane. While Wainio is in row 33, Grandcolas is now in row 23, and there is no passenger next to her who also makes a phone call. (US District Court for the Eastern District of Virginia, Alexandria Division 7/31/2006)