This page can be viewed at http://www.historycommons.org/entity.jsp?entity=jackson_hogen_1

Jackson Hogen was a participant or observer in the following events: 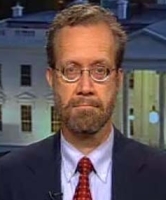 Scott Shane. [Source: Charlie Rose (.com)]As the perjury and obstruction trial of former White House aide Lewis Libby gets underway (see January 16-23, 2007), the New York Times publishes a profile of Libby that paints him as a relatively nonpartisan figure with a keen intellect, a literary bent, and a driving interest in upholding the nation’s security. Most of the quotes used in the profile are from members of the Libby Legal Defense Trust (see After October 28, 2005 and February 21, 2006). The profile, written by Times reporter Scott Shane, emphasizes Libby’s complex nature, calling him “paradox[ical]” and contrasting his literary aspirations and buttoned-down demeanor with a fondness for tequila shooters and his use of his childhood nickname, “Scooter.” Shane lines up quotes from Libby’s friends and supporters who express their dismay at the charges he faces, and their disbelief that anyone could conceive of his involvement in any sort of criminal enterprise. “I don’t often use the word ‘incomprehensible,’ but this is incomprehensible to me,” says Dennis Ross, a foreign policy expert and the only Democrat on the Defense Trust board. “He’s a lawyer who’s as professional and competent as anyone I know. He’s a friend, and when he says he’s innocent, I believe him. I just can’t account for this case.” Shane writes that Libby’s friends and former colleagues consider the charges, and the conduct of special counsel Patrick Fitzgerald in prosecuting the case, both “unjust [and] a terrible irony.” Vice President Dick Cheney’s former communications adviser, Mary Matalin, says of Libby, “He’s going to be the poster boy for the criminalization of politics, and he’s not even political.” Matalin notes that Libby was often described as “Cheney’s Cheney,” an “absolutely salient translator” of the ideas and policy initiatives of Cheney, his former boss. But neoconservative Francis Fukuyama, who once worked with Libby in the State Department, says regardless of Libby’s closeness to Cheney, he is not a conservative ideologue. “He never struck me, even knowing him as I do, as an ideologue,” Fukuyama says. “I wouldn’t say I have a particularly good handle on his worldview.” In many ways, Shane notes, Libby was one of the driving forces behind the Iraq war. “Libby didn’t plan the war,” says historian John Prados, one of the few people quoted in the profile who are not close friends or political allies of the former White House aide. “But he did enable the administration to set out on that course. He was the facilitator.” Famed Washington attorney Leonard Garment, who headed a law firm Libby once worked for, calls Libby “reliable, immensely hard working, and guarded.” Garment once represented Richard Nixon during the Watergate investigation (see August 28, 1974). Libby’s friend Jackson Hogen, who describes himself as a liberal Democrat, says that Libby’s wife Harriet is also a Democrat. “She probably cancels his vote every four years,” Hogan says. “It’s a credit to Scooter that he can maintain a friend like me and a wife like her all these years.” Libby’s driving passion, say Matalin and other close friends and colleagues, is the security of the nation. “What animates him is security,” Matalin says. “On 9/12 [the day after the 9/11 attacks], there were but a handful of people who had the strategic grasp of terrorism that he did.” As a person, Hogen says that while Libby “puts up a tough front… there’s a kind human being in there who’s really gotten beat up in this affair.” Shane winds up his profile with a quote from liberal columnist Paul Andersen, who lunched with Libby last summer while Libby was vacationing in Colorado. “I got a feeling for him as a family man, a guy who likes the mountains,” Andersen recalls. “Later, it seemed like he was nursing some serious pain. It seemed a dreadful shame that circumstances can sometimes ruin lives.” (Shane 1/17/2007) Author and progressive blogger Marcy Wheeler is contemptuous of the Shane article, writing that it is almost obsequious in its regard for Libby, and notes that Shane’s “profile” of Libby is restricted to those who support him and raise money for his defense fund, including Ross, Fukuyama, and Matalin. Wheeler advises Shane, “[I]f you’re going to do a profile, base it on neutral observers.” Wheeler also speculates that Shane may even be trying to echo the defense’s talking points, observing that at the beginning of a trial that hinges on Libby’s divulging of a CIA official’s covert identity, Shane quotes several people who note how “reserved” Libby is, even quoting one as saying Libby is silent as “a tomb” on security matters. Shane, Wheeler notes, also hits on Libby’s “memory defense” (see January 31, 2006) by quoting several of his friends on his propensity for hard, intense work. (Marcy Wheeler 1/17/2007)