This page can be viewed at http://www.historycommons.org/entity.jsp?entity=jacob_hornberger_1

Jacob Hornberger was a participant or observer in the following events: 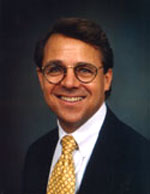 Jacob Hornberger. [Source: Institute for Historical Review]Jacob Hornberger, the president of the Future of Freedom Foundation, writes that the Pentagon has learned “when the judiciary issues an order, the Pentagon is required to obey it,” which is “why the government is now permitting Ali Saleh al-Marri to meet with his attorney as part of his habeas corpus proceeding in federal district court in South Carolina.” Al-Marri is one of three “enemy combatants” (see June 23, 2003) designated by President Bush. Until recently, the Pentagon had refused to allow al-Marri to contact his lawyers, who have been challenging his detention and enemy combatant status in the US courts, but a recent Supreme Court decision scotched that procedure (see June 28, 2004). Hornberger compares al-Marri’s treatment to that of ousted Iraqi dictator Saddam Hussein, whom Iraqi and US officials have restricted from consulting with his own lawyers in Iraq. Al-Marri, before being removed from the US judicial system, “would have been entitled to all the rights and guarantees recognized in the Constitution and Bill of Rights, including being informed of the charges against him, compulsory process of witnesses, cross-examination of adverse witnesses, assistance of counsel, and a jury trial,” Hornberger writes. “If the jury had acquitted him, as juries recently did with defendants in federal terrorism cases brought in Detroit and Boise, he would have walked away from the federal courtroom a free man. By removing al-Marri from the jurisdiction of the federal court on the eve of his trial and placing him into military custody as an ‘enemy combatant,’ the Justice Department and the Pentagon, working together, effectively hijacked our criminal justice system and sabotaged our constitutional order.” (Hornberger 8/21/2004; Future of Freedom Foundation 2007)