This page can be viewed at http://www.historycommons.org/entity.jsp?entity=jacob_weisberg_1

Jacob Weisberg was a participant or observer in the following events:

October 18, 2005: Columnist: Fitzgerald’s Investigation a ‘Disaster’ for Freedom of Press and Freedom of Speech 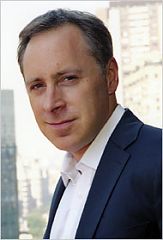 Slate’s Jacob Weisberg. [Source: Paid Content (.org)]Jacob Weisberg, a senior editor of Slate magazine, warns liberals that the possible prosecution of White House official Karl Rove and/or former White House aide Lewis Libby may not be cause for celebration. “Opponents of the Bush administration are anticipating vindication on various fronts—justice for their nemesis Karl Rove, repudiation of George W. Bush’s dishonest case for the Iraq war, a comeuppance for Chalabi-loving reporter Judith Miller of the New York Times, and even some payback for the excesses of independent counsels during the Clinton years,” he writes. Weisberg calls support for the potential prosecutions “self-destructive,” and explains: “Anyone who cares about civil liberties, freedom of information, or even just fair play should have been skeptical about [special prosecutor Patrick] Fitzgerald’s investigation from the start. Claiming a few conservative scalps might be satisfying, but they’ll come at a cost to principles liberals hold dear: the press’s right to find out, the government’s ability to disclose, and the public’s right to know.” Weisberg calls the law that is at the heart of the Plame Wilson investigation, the Intelligence Identities Protection Act (IIPA), “flawed,” and the entire Fitzgerald investigation “misbegotten.” The law is difficult to use for a conviction because it requires that prosecutors prove intent to do harm. “Under the First Amendment, we have a right to debate what is done in our name, even by secret agents,” Weisberg writes. “It may be impossible to criminalize malicious disclosure without hampering essential public debate.” After calling the White House “negligent” and “stupid” for revealing Plame Wilson’s CIA status, he says that no one has shown Rove, Libby, or any other official leaked her name with the intent of causing her or her career harm. Weisberg writes: “[A]fter two years of digging, no evidence has emerged that anyone who worked for Bush and talked to reporters about Plame… knew she was undercover. And as nasty as they might be, it’s not really thinkable that they would have known. You need a pretty low opinion of people in the White House to imagine they would knowingly foster the possible assassination of CIA assets in other countries for the sake of retaliation against someone who wrote an op-ed they didn’t like in the New York Times” (see July 6, 2003). The outing of Plame Wilson was “accidental,” Weisberg claims, part of the Bush administration’s attempts to defend itself against its failure to find WMD in Iraq. Weisberg calls Fitzgerald “relentless and ambitious,” implying that he is pursuing the case for the fulfillment of his personal ambition, and says that no evidence exists of anyone breaking any laws, whether it be the IIPA, statutes against perjury or conspiracy, obstruction of justice, or anything else. Fitzgerald will indict someone for something, Weisberg states, because not to do so would seem like he failed in his investigation. Fitzgerald is sure to bring what Weisberg calls “creative crap charges of his own devising” against someone, be it a White House official or a reporter. Weisberg concludes by calling Fitzgerald’s investigation “a disaster for freedom of the press and freedom of information.” (Weisberg 10/18/2005)

Jacob Weisberg, the editor of the online news publication Slate, writes that the White House is correct in labeling Fox News as a biased, conservatively slanted propaganda outlet and not a mainstream, non-partisan news provider (see October 11, 2009 and October 13, 2009). Weisberg writes that Fox News provided evidence for the charge in its own news coverage of the White House’s claim. “Fox responded the way it always does,” Weisberg writes. “It denied the accusation with a straight face while proceeding to confirm it with its coverage.” Weisberg analyzes the Fox News story on the episode. The Fox story briefly detailed the White House claim, then lined up five critics of the White House to contradict the claim. Two of the critics were Fox News employees, vice president Michael Clemente and anchor Chris Wallace. A third, Tony Blankley, is a frequent Fox News contributor and the former press secretary for Newt Gingrich (R-GA), the ex-speaker of the House. The fourth was David Gergen, the veteran Washington columnist, who said the White House statement hurts Obama and helps Fox News. The fifth was the White House columnist for the right-leaning online news magazine Politico, who said that the controversy would boost Fox’s ratings. “Five people are quoted in this article,” Weisberg writes. “Two of them work for Fox. All of them assert that administration officials are either wrong in substance or politically foolish to criticize the network. No one is cited supporting Dunn’s criticisms or saying that it could make sense, morally or politically, for Obama to challenge the network’s power. It’s a textbook example of a biased news story.” Weisberg goes on to note that Fox News peppered its coverage of the story with accusations that Obama was compiling a Nixon-like “enemies list” with Fox News at the top, along with exhortations for Obama to stop complaining and get back to work and claims that other media providers were staunchly in Fox News’s corner. “Any news organization that took its responsibilities seriously would take pains to cover presidential criticism fairly,” Weisberg concludes. “It would regard doing so as itself a test of integrity and take pains not to load the dice in its own favor. At any other network, accusation of bias might even lead to some soul-searching and behavioral adjustment. At Fox, by contrast, complaints of unfairness prompt only hoots of derision and demands for ‘evidence’ and ‘proof,’ which when presented is brushed off and ignored.… Rather than in any way maturing, Fox has in recent months become more boisterous and demagogic in rallying the opposition against Obama.” (Fox News 10/12/2009; Weisberg 10/17/2009)