This page can be viewed at http://www.historycommons.org/entity.jsp?entity=james_parks_1

James Parks was a participant or observer in the following events: 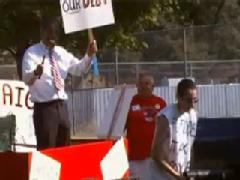 A tea party member masquerading as President Obama pretends to whip a ‘future taxpayer’ during a parade in Washington State. [Source: KXLY-TV]During the annual Sportsman’s Day parade in Naches, Washington State, a tea party group called “Remember Us We The People” displays a float that many area residents find “offensive and in bad taste.” The group, an affiliate of the national Tea Party Patriots, displays a float that looks like a Radio Flyer wagon, pulled behind a truck. People inside the truck display signs that say, among other slogans, “ObamaCare,” “Healthcare Takeover,” and “Wasted Tax Money.” On the float itself is a man in a shirt, tie, and a President Obama mask. In one hand he carries a sign reading: “Hey Kids! Thanks for paying ou[r] debt!” In the other hand he cracks a whip over a teenager who is pretending to pull the wagon; the teen wears a shirt reading, “Future Tax Payer.” Event organizers later say they receive numerous complaints, some of which point out that the depiction evoked racial stereotypes from the slavery era. One local resident says of the float: “It certainly came across as very racist to me, and really bad manners, bottom line, lack of manners.… A lack of respect for our presidency and our government, just everything down the line, it was really quite disturbing.” The president of the tea party organization, Kirk Groenig, says the float “maybe” went “a little too far,” and claims that his group is being victimized by groundless accusations of racism, saying, “When they don’t like your message, they try to deem you as racist, that’s really unfortunate.” Local Lions Club president John Miles disagrees, saying, “There’s respect for the position [of the presidency] and I think [Groenig] exceeded any good taste in his group’s presentation.” Another resident says that the tea party group may have lost its message due to its extreme presentation: “If you have people… thinking it was racist and not liking the message as it was promoted, then I would say you’re not too effective.” James Parks, the head of the Yakima County NAACP chapter, says the float is “sad” but not necessarily racist: “A lot of people will see it in different ways. I don’t see it as being racist. It’s more… about the economy. If the economy was better, I don’t think we would have all these things happening. I think there are better ways for people to protest what’s going on in the government.” Groenig’s group intends to display the float in an upcoming parade. The application to display it during the Sportsman’s Day parade claimed that the float was an attempt to “attract, educate, organize, and mobilize our fellow citizens to secure public policy consistent with core values of America, fiscal responsibility, limited government, and free market enterprise.” (Kauder 9/13/2010; Lester 9/13/2010; Armbruster 9/14/2010)