This page can be viewed at http://www.historycommons.org/entity.jsp?entity=james_ujaama_1

James Ujaama was a participant or observer in the following events:

Radical British cleric Abu Hamza al-Masri sends an associate, James Ujaama, to the US to raise funds for his operations. Abu Hamza, an informer for the British security services (see Early 1997), is linked to both Osama bin Laden (see March 1999 and Summer 2001) and the Islamic Army of Aden, a Yemeni al-Qaeda-affiliate (see December 23, 1998 and December 28-29, 1998). Ujaama, an American citizen, arrives in London in 1999 and soon becomes part of Abu Hamza’s inner circle. Between 1999 and 2002 Ujaama makes 11 trips back to the US. Allegedly, one of the trips is to raise money for Abu Hamza’s activities in Britain through a tour of US mosques. Another is an attempt to set up a terrorist training camp in Oregon (see November 1999-Early 2000). Ujaama also travels to Afghanistan several times (see December 2000-December 2001), and may train at camps there. (O'Neill and McGrory 2006, pp. 188)

James Ujaama, a follower of militant London imam Abu Hamza al-Masri, contacts Abu Hamza from the US and offers the use of a ranch in the remote town of Bly, Oregon, as a militant training camp. Ujaama found out about the ranch through a friend, Sami Osman, who lives there with a group of radical Muslims. Abu Hamza is having problems in Britain due to tight firearms laws and the collapse of a scheme he had to send his recruits to Yemen for weapons training (see (June 1998)). Ujaama faxes Abu Hamza, saying that the ranch could be used to establish a training camp and that he and his associates are stockpiling weapons and ammunition. In addition, the ranch looks “just like Afghanistan” and Oregon is a good place for the camp because it is a “pro-militia and firearms state.” Finally, the ranch is good because, if Abu Hamza comes there, the unbelievers will not be able to remove him “without a serious armed fight.” Two leading associates of Abu Hamza will soon arrive to check the ranch out (see November 1999-Early 2000). Calls between Abu Hamza and the US are noted by the authorities around this time, although it is unclear if this fax is intercepted (see November-December 1999). Osman is under surveillance by the FBI until he moves to the ranch, but the FBI will lose him due to his relocation and only find him again after he is mentioned in a report by an Oregon policeman in the middle of December. (O'Neill and McGrory 2006, pp. 188-189) 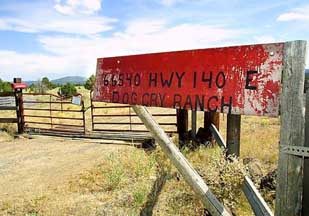 The ranch near Bly, Oregon. [Source: Seattle Times]Haroon Rashid Aswat and Oussama Kassir, assistants to leading London-based radical cleric Abu Hamza al-Masri, arrive in the US to assess the suitability of a proposed terrorist training camp. Upon arrival, they meet up with James Ujaama, another associate of Abu Hamza who proposed the camp (see October 1999) and its owner Sami Osman. Aswat is considered a close aide to Abu Hamza, who himself is an informer for the British (see Early 1997), and will later be described as the mastermind of the 7/7 London bombings.
Unsuitable Facility - However, Aswat and Kassir are unhappy with what they find, especially as Ujaama does not have a key to unlock the gate to the ranch when they arrive. In addition, the ranch lacks food, running water, toilet facilities, and barracks, and only has a simple trailer on it. They stay at the ranch for about two months and conduct weapons training for around 15 militants present. According to a witness, Kassir brags that he is a “hit man” for Abu Hamza and Osama bin Laden and has had jihad training in Afghanistan, Kashmir, and Lebanon. Jihadi videos are shown and a computer disc with details of how to improvise poisons is displayed. In addition, a scheme for poisoning a water supply is discussed, as are armed robberies, building an underground bunker to conceal weapons, and firebombing vehicles.
FBI Investigation - However, on December 13 Osman’s car is stopped due to a faulty brake light and the police officer notices that two men, who turn out to be Aswat and Kassir, are acting strangely in the car. For example, Aswat clutches a briefcase closely to his chest as the police officer questions him. The FBI previously had Osman under surveillance, but has lost him. A database check performed by the officer alerts the FBI and an agent is immediately dispatched to Bly. He shows a surveillance photo of Aswat and Kassir to the officer, who identifies them as the other two men in the car. More FBI agents arrive to investigate the ranch, but, before they can raid it, Aswat and Kassir leave for Seattle. There, Aswat allegedly boasts of being bin Laden’s “hit man,” just as Kassir has done.
Advised to Abandon Ranch - Aswat and Kassir eventually return to Britain and advise Abu Hamza against putting any further effort into the ranch. Kassir will be arrested in the Czech Republic and extradited in 2007 to stand trial. (Graham 7/24/2005; McDougall 7/31/2005; Carter and Bernton 8/9/2005; O'Neill and McGrory 2006, pp. 185-186, 194; Milton 9/26/2007)

Leading British radical and informer Abu Hamza al-Masri (see Early 1997) sends a computer to the Taliban’s foreign minister. The computer is part of a package of cash and hardware hand-delivered by Abu Hamza’s aide James Ujaama. According to testimony by FBI agent Fred Humphries, Abu Hamza sends the computer to “curry favor” with the Taliban. The cash is allegedly for a girls’ school in Khost, although Ujaama will later say that the school does not exist and it is unclear what happens to the money. Ujaama is accompanied on the trip by Feroz Abbasi, a recruit Abu Hamza is sending to Pakistan for military training (see December 2000-December 2001), although Ujaama does not accompany Abbasi all the way to his destination, angering Abu Hamza. (O'Neill and McGrory 2006, pp. 196-197)

After being indoctrinated by radical imam Abu Hamza al-Masri in London (see 1999-2000), a recruit named Feroz Abbasi travels to Pakistan and then Afghanistan for military training. On his journey to Pakistan he is accompanied by James Ujaama, who had tried to help Abu Hamza establish a militant training camp in the US (see November 1999-Early 2000). Before departure, Abu Hamza told Abbasi he would train with the Taliban, and that they would then expect him to fight for them, to which he agreed. After staying at an Islamic Jihad guest house in Kabul, for which Abu Hamza reportedly has the number, Abbasi undergoes basic training at Al Farooq camp, including instruction in weapons handling, battlefield maneuvers, and explosives. The camp is also visited by Osama bin Laden, who lectures the new recruits on politics. Abbasi later returns to Al Farooq for a more advanced course, covering reconnaissance, guerrilla warfare, and ambushes. After this, Abbasi, “Australian Taliban” David Hicks, and another man are interviewed by al-Qaeda military commander Mohammed Atef, and Abbasi agrees to perform missions for Atef, which may include a suicide bombing. Abbasi then has even more advanced training, focusing on assassinations and running a sleeper cell, at a camp by Kandahar airport. At some time in September 2001, he explicitly volunteers for a suicide mission. However, he is captured by the Northern Alliance three months later. When caught, he has a grenade concealed on him and could detonate it, killing himself and the two Northern Alliance soldiers that captured him. He hesitates because he does not want to kill fellow Muslims, and the grenade is found. The Afghans then put him in prison in Kandahar for two days, before formally transferring him to the US military. He is held in a prison at Kandahar airport, and then flown to Guantanamo in Cuba, where he will be held for three years. (O'Neill and McGrory 2006, pp. 201-202, 208-213)

British radical leader and informer Abu Hamza al-Masri (see Early 1997) sends £6,000 (about $9,000) to Afghanistan. The money is to be used to build a computer lab in Kandahar that can be used by Taliban officials and the general public. The money is sent by courier, an aide to Abu Hamza called James Ujaama. However, Ujaama is stopped by British authorities at the airport on his way to Pakistan, apparently because they are suspicious of his travel patterns and the amount of money he is carrying. Ujaama tells them the money is for a Taliban school and that he will go to Afghanistan even if he cannot get a visa, because this is easy. The officials are suspicious, but let him go, simply asking him to report to them on his return. However, Ujaama does not make it to the Pakistan-Afghanistan border before the 9/11 attacks and will return to London within a few weeks without delivering the money. (O'Neill and McGrory 2006, pp. 197-198)

In 2002, federal prosecutors are building a case against a group of Islamist militants for attempting to start a militant training camp in Oregon in 1999 (see November 1999-Early 2000). They prepare charges against radical London imam Abu Hamza al-Masri, his “highly public aide” Haroon Rashid Aswat, Oussama Kassir (who visited the prospective camp with Aswat), and James Ujaama. Ujaama is living in Seattle, but the others are believed to be overseas. Seattle prosecutors want to seek a grand jury indictment against all of them, which would result in arrest warrants and possible detention for extradition. However, this plan is blocked by higher-level officials at Justice Department headquarters, who want most of the case to be handled by the US Attorney’s Office in New York City. Seattle prosecutors are only allowed to bring charges against Ujaama. (Bernton and Heath 7/24/2005) They go ahead and arrest Ujaama in August 2002, finding weapons and training materials, and charge him with conspiring with Abu Hamza “to provide material support and resources” to the Taliban. One of his associates, Feroz Abbasi, is already in Guantanamo Bay, and is talking to interrogators about trips Ujaama has made to Afghanistan (see December 2000-December 2001). Ujaama quickly agrees to co-operate with the authorities, giving them details about Abu Hamza’s activities, and is given a two-year sentence for a lesser offence. (O'Neill and McGrory 2006, pp. 189-190, 198-200) The others are merely listed in Ujaama’s indictment as unindicted co-conspirators. Abu Hamza has actually been working as an informant for British intelligence (see Early 1997), but by early 2004 his relationship with the British has soured (see April 2003 and April 26, 2004), and the US Justice Department will finally indict him for charges relating to the training camp in May 2004. However, Aswat still will not be indicted. When asked why Aswat is not indicted as well, a federal official in Seattle will reply with frustration, “That’s a great question.” (Bernton and Heath 7/24/2005) Shortly after the 7/7 London bombings (see July 7, 2005), it will be widely reported that Aswat was the attack’s mastermind (see Late June-July 7, 2005). Then a counterterrorism expert will claim that Aswat was also an informant for British intelligence, and this explains why the US never indicted him and other mysteries surrounding him (see July 29, 2005).