This page can be viewed at http://www.historycommons.org/entity.jsp?entity=jason_burke_1

Jason Burke was a participant or observer in the following events: 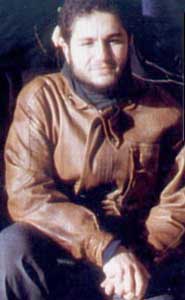 Mohamed Atta. [Source: Der Spiegel]Future 9/11 hijacker Mohamed Atta leaves Hamburg for some time in late 1997 and early 1998, and he may go to militant training camps in Afghanistan, possibly with hijacker associate Ramzi bin al-Shibh. When Atta returns in the spring of 1998 he tells his roommate that he has been on another pilgrimage (hajj) to Mecca, although author Terry McDermott will later note, “He had been on hajj just 18 months earlier, and it would be unlikely for a student—even one so devout—to go twice so quickly or stay so long.” This is Atta’s longest absence since arriving in Hamburg, and there is no record of him spending any substantial portion of it at home in Cairo. According to McDermott, he leaves Hamburg “as he usually did over the winter holiday.” (McDermott 2005, pp. 57) But according to the 9/11 Commission, the gap is in February-March 1998, “a period for which there is no evidence of his presence in Germany.” Atta’s friends hold a party for him on his return, which is unusual for a student who has just returned from home. After returning to Germany, Atta applies for a new passport, something he will also do after returning from Afghanistan in early 2000 (see Late 1999). (9/11 Commission 7/24/2004, pp. 167) There are other unexplained absences from Hamburg by members of the same cell around this time (see Summer-Winter 1998). Although the 9/11 Commission, based on information obtained from detainees during interrogation, will say that Atta and his associates do not travel to Afghanistan and join al-Qaeda until late 1999, some commentators will disagree and say that this happens earlier. (McDermott 2005, pp. 57) For example, McDermott will say of the cell members’ various disappearances in 1997-8, “Practically, there is only one place they likely would have gone—Afghanistan.” (9/11 Commission 7/24/2004, pp. 166) Jane Corbin will say that “[t]he time that Mohamed Atta spent in Afghanistan in 1998 was a period of ambitious reach for Osama bin Laden.” (Corbin 2003, pp. 142) Jason Burke will say that “[i]n early 1998, [Atta] is thought to have traveled to Afghanistan, probably to Khaldan camp.” (Burke 2004, pp. 243) In mid-2002, Al Jazeera reporter Yosri Fouda will allegedly interview bin al-Shibh and 9/11 mastermind Khalid Shaikh Mohammed in Pakistan (see April, June, or August 2002). In a book he co-writes in 2003, he will claim that an al-Qaeda operative known only by a nickname Fouda gave him so he could call him something—Abu Bakr—helped set up the interview. At one point, Bakr allegedly told Fouda that he met Atta and bin al-Shibh at a training camp around this time, saying: “They came together. I did not know who they were.… Brother Ramzi was very active and very much into media, and brother Atta was very kind.” Bin al-Shibh disappears in Germany for several months in late 1997, and re-enters Germany on a new visa in December 1997. (Fouda and Fielding 2003, pp. 124)

Journalist Jason Burke writes in the Observer about recent interviews he has conducted with prisoners held by Kurdish rebels in northern Iraq. One prisoner, Mohammed Mansour Shahab, claims to have been an Iraqi government agent who repeatedly met with Osama bin Laden over a several year period. The New Yorker published an article in March 2002 largely based on Shahab’s allegations and concluded, “the Kurds may have evidence of [Saddam Hussein’s] ties to Osama bin Laden’s terrorist network.” But Burke is able to find a number of inconsistencies and falsehoods in Shahab’s account, and after he points them out, Shahab does not deny that he was lying. Burke suggests that Shahab, like other prisoners being held by the Kurds, was lying in hopes of getting his prison sentence reduced since his Kurdish captors are looking to promote propaganda against their enemy, the Hussein government. Burke also interviews a number of prisoners belonging to the Ansar al-Islam militant group that is allegedly linked to Abu Musab al-Zarqawi. He does not see evidence of any link between that group and Hussein’s government and concludes, “Saddam may well have infiltrated the Ansar al-Islam with a view to monitoring the developments of the group (indeed it would be odd if he had not) but that appears to be about as far as his involvement with the group, and incidentally with al-Qaeda, goes.” (Burke 2/9/2003) 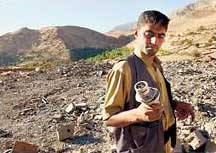 A Kurdish soldier allied with US forces stands on the site where the Sargat training camp used to be. He holds a piece of a US cruise missile that hit the camp. [Source: Scott Peterson / Getty Images]US Special Forces working with local Kurdish forces overrun the small border region of Iraq controlled by the militant group Ansar al-Islam. This is where Secretary of State Colin Powell alleged militant leader Abu Musab al-Zarqawi had a ‘poison factory’ near the town of Khurmal where chemical weapons of mass destruction capable of killing thousands were made. Joint Chiefs of Staff Chairman Gen. Richard Myers says, “We think that’s probably where the ricin that was found in London probably came; at least the operatives and maybe some of the formulas came from this site.” Defense Secretary Donald Rumsfeld comments, “We’re not certain what we’ll find but we should know more in the next three days - three or four days.” (Rose 3/31/2003) In a 2007 book, CIA Director George Tenet will claim, “Shortly after the invasion of Iraq, al-Zarqawi’s camp in Khurmal was bombed by the US military. We obtained reliable human intelligence reporting and forensic samples confirming that poisons and toxins had been produced at the camp.” (Tenet 2007, pp. 277-278) He will further claim that the camp “engaged in production and training in the use of low-level poisons such as cyanide. We had intelligence telling us that al-Zarqawi’s men had tested these poisons on animals and, in at least one case, on one of their own associates. They laughed about how well it worked.” (Tenet 2007, pp. 350) But Tenet’s claims seem wildly overblown compared to other subsequent news reports about what was found at the camp. In late April 2003, the Los Angeles Times will report that, “Documents obtained by the Los Angeles Times, along with interviews with US and Kurdish intelligence operatives, indicate [Ansar al-Islam] was partly funded and armed from abroad; was experimenting with chemicals, including toxic agents and a cyanide-based body lotion; and had international aspirations. But the documents, statements by imprisoned Ansar guerrillas, and visits to the group’s strongholds before and after the war produced no strong evidence of connections to Baghdad and indicated that Ansar was not a sophisticated terrorist organization. The group was a dedicated, but fledgling, al-Qaeda surrogate lacking the capability to muster a serious threat beyond its mountain borders.” A crude chemical laboratory is found in the village of Sargat, but no evidence of any sophisticated equipment is found. “Tests have revealed the presence of hydrogen cyanide and potassium cyanide, poisons normally used to kill rodents and other pests. The group, according to Kurdish officials, had been experimenting on animals with a cyanide-laced cream. Several jars of peach body lotion lay at the site beside chemicals and a few empty wooden birdcages.” While a lot of documentation is found showing intention to create chemical weapons, the actual capability appears to have been quite low. (Fleishman 4/27/2003) As the Christian Science Monitor will later conclude, the “‘poison factory’ proved primitive; nothing but substances commonly used to kill rodents were found there.” (Peterson 10/16/2003) Journalist Jason Burke will also later comment, “As one of the first journalists to enter the [al-Qaeda] research facilities at the Darunta camp in eastern Afghanistan in 2001, I was struck by how crude they were. The Ansar al-Islam terrorist group’s alleged chemical weapons factory in northern Iraq, which I inspected the day after its capture in 2003, was even more rudimentary.” (Burke 5/2004)