This page can be viewed at http://www.historycommons.org/entity.jsp?entity=jeremy_powell

Jeremy Powell was a participant or observer in the following events:

Tech. Sgt. Jeremy Powell. [Source: Scott A. Gwilt/ Rome Sentinel]The FAA’s Boston Center calls NORAD’s Northeast Air Defense Sector (NEADS) in Rome, NY, to alert it to the suspected hijacking of Flight 11. According to the 9/11 Commission, this is “the first notification received by the military—at any level—that American 11 had been hijacked.” (9/11 Commission 7/24/2004, pp. 20; 9/11 Commission 8/26/2004, pp. 13) The call is made by Joseph Cooper, an air traffic controller at the Boston Center, and answered by Jeremy Powell, a technical sergeant on the NEADS operations floor. (Bronner 8/1/2006; Spencer 2008, pp. 25) Beginning the call, Cooper says: “Hi. Boston Center TMU [traffic management unit], we have a problem here. We have a hijacked aircraft headed towards New York, and we need you guys to, we need someone to scramble some F-16s or something up there, help us out.” Powell replies, “Is this real-world or exercise?” Cooper answers, “No, this is not an exercise, not a test.” (9/11 Commission 7/24/2004, pp. 20) Shortly into the call, Powell passes the phone on to Lieutenant Colonel Dawne Deskins (see (8:38 a.m.) September 11, 2001). Deskins identifies herself to Cooper, and he tells her, “We have a hijacked aircraft and I need you to get some sort of fighters out here to help us out.” (Seely 1/25/2002; ABC News 9/11/2002; Bamford 2004, pp. 8; Spencer 2008, pp. 26)
Military Claims Call Goes against Procedure - The 1st Air Force’s official history of the response to the 9/11 attacks will later suggest that Boston Center is not following normal procedures when it makes this call to NEADS. It states: “If normal procedures had taken place… Powell probably wouldn’t have taken that phone call. Normally, the FAA would have contacted officials at the Pentagon’s National Military Command Center who would have contacted the North American Aerospace Defense Command. The secretary of defense would have had to approve the use of military assets to assist in a hijacking, always considered a law enforcement issue.” The only explanation it gives for this departure from protocol is that “nothing was normal on Sept. 11, 2001, and many say the traditional chain of command went by the wayside to get the job done.” (Filson 2003, pp. 51)
Accounts Conflict over Time of Call - There will be some conflict between different accounts, as to when this vital call from Boston Center to NEADS occurs. An ABC News documentary will indicate it is made as early as 8:31 a.m. (ABC News 9/11/2002) Another ABC News report will state, “Shortly after 8:30 a.m., behind the scenes, word of a possible hijacking [reaches] various stations of NORAD.” (ABC News 9/14/2002) NEADS logs indicate the call occurs at 8:40 a.m., and NORAD will report this as the time of the call in a press release on September 18, 2001. (Federal Aviation Administration 9/17/2001

At NORAD’s Northeast Air Defense Sector (NEADS), the technical sergeant who has been notified of the suspected hijacking of Flight 11 passes on this news to colleagues of his on the NEADS operations floor. (Spencer 2008, pp. 25) The FAA’s Boston Center has just called NEADS to report “a hijacked aircraft headed towards New York,” and has requested that fighter jets be launched in response (see (8:37 a.m.) September 11, 2001). (9/11 Commission 7/24/2004, pp. 20) Tech. Sgt. Jeremy Powell, who answers this call, reportedly “bolts up and turns toward the ID section behind him on the ops floor.” He says, “We’ve got a hijack going on!” Master Sergeant Maureen Dooley, the leader of the ID section, mistakenly thinks this is part of the day’s training exercise (see (6:30 a.m.) September 11, 2001) and tells the other members of her team: “We have a hijack going on. Get your checklists. The exercise is on.” But Powell then clarifies: “No, you don’t understand. We have a no-shit hijack!” Sitting next to Dooley is Master Sergeant Joe McCain, the NEADS mission crew commander technician, who gets on the paging system and calls for the mission crew commander (MCC), Major Kevin Nasypany, to come to the operations floor immediately. Nasypany is in charge of the operations floor and needs to know if anything important is happening. He arrives moments later and learns of the hijacking. (Bronner 8/1/2006; Spencer 2008, pp. 25-26 and 40) 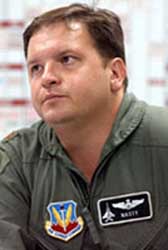 Major Daniel Nash. [Source: Cape Cod Times]Major Daniel Nash (codenamed Nasty) and Lieutenant Colonel Timothy Duffy (codenamed Duff) are the two F-15 pilots who would scramble after Flight 11. Apparently, they get several informal calls warning to get ready. According to Nash, at this time, a colleague at the Otis Air National Guard Base tells him that a flight out of Boston has been hijacked, and that he should be on alert. (Dennehy 8/21/2002) NEADS senior technician Jeremy Powell (informed about the hijacking at 8:37 a.m.), says that he telephones Otis Air National Guard Base soon thereafter to tell it to upgrade its “readiness posture.” (Seely 1/25/2002) Boston flight control had tried calling the Otis base directly at 8:34 a.m., although the result of that call remains unclear. Duffy recalls being warned: “I was just standing up by the ops desk and I was told I had a phone call. I asked who it was and they said the [Boston] tower calling and something about a hijacking. It was Flight American 11, a 767, out of Boston going to California. At the time we ran in and got suited up.” (Scott 6/3/2002; Dennehy 8/21/2002; BBC 9/1/2002) At NEADS, the mission crew commander Major Kevin Nasypany orders his Weapons Team, which controls the fighters, to put the Otis planes on “battle stations.” This means the two “alert” pilots are “jolted into action by a piercing ‘battle horn.’ They run to their jets, climb up, strap in, and do everything they need to do to get ready to fly short of starting the engines.” (Bronner 8/1/2006) NEADS Commander Robert Marr is also reported as having ordered the Otis pilots to battle stations. (Filson 2003, pp. 55; 9/11 Commission 7/24/2004, pp. 20) Duffy confirms, “Halfway to the jets, we got ‘battle stations’… which means to get ready for action.” (Scott 6/3/2002) The actual scramble order does not come until the pilots are already waiting in the fighters: “We went out, we hopped in the jets and we were ready to go—standby for a scramble order if we were going to get one.” (BBC 9/1/2002) Duffy continues, “I briefed Nasty on the information I had about the American Airlines Flight. About four-five minutes later, we got the scramble order and took off.” (Scott 6/3/2002) However, the official notification to scramble these fighters does not come until 8:46 a.m. The six-minute (or more) delay between unofficial and official notification has not been explained.

A technical sergeant at NORAD’s Northeast Air Defense Sector (NEADS) learns, to his astonishment, that the supervisor of flying (SOF) for the alert unit at Langley Air Force Base is unavailable, because he has taken off in a spare jet in response to the recent scramble order (see 9:24 a.m. September 11, 2001). (Spencer 2008, pp. 148)
SOF Was Instructed to Launch - Captain Craig Borgstrom is the operations manager of a detachment at Langley AFB from the North Dakota Air National Guard’s 119th Fighter Wing. In the event of a scramble order, he is supposed to serve as the SOF, being responsible for monitoring the scrambled jets, working with local air traffic controllers, and communicating with NEADS. However, someone at NEADS (who, exactly, is unstated) recently called and urged him to launch as many aircraft as possible (see (Between 9:10 a.m. and 9:23 a.m.) September 11, 2001). (Longman 2002, pp. 65; Spencer 2008, pp. 114, 116, 118) He has therefore just taken off, along with the unit’s two alert pilots (see (9:25 a.m.-9:30 a.m.) September 11, 2001). (Tyson 4/16/2002; 9/11 Commission 7/24/2004, pp. 27)
NEADS Wants to Notify Borgstrom of Jets' Mission - At NEADS, Tech Sgt. Jeremy Powell now tries calling Borgstrom to inform him that his jets’ mission is to set up a combat air patrol over Washington and intercept a hijacked civilian airliner that is approaching the city. However, as Borgstrom is absent, the phone just rings and rings. Finally, a sergeant picks it up. Powell asks to speak to the SOF and is informed, “Oh, he’s not here.” Incredulous, Powell says, “I need to speak to the SOF,” but the sergeant retorts, “He’s not here!” Powell knows that the alert detachment at Langley AFB should have an SOF on duty 24/7. He raises his voice, saying, “This is Huntress and I need to talk to your SOF now!” (“Huntress” is the call sign for NEADS.) The sergeant replies, “He’s one of the three that got airborne!” Confused, Powell says: “Three? I only scrambled two!” The sergeant explains, “No, he took off in a spare jet.” Powell is speechless, but finally says, “Wow… okay,” before hanging up the phone. The order to launch three jets, instead of just the two that are kept on alert at Langley AFB, had not gone through Powell. He assumes it was issued by the senior officers in the NEADS battle cab. According to author Lynn Spencer, Powell thinks to himself, “The battle cab has taken serious measures to increase our air power.” (Spencer 2008, pp. 148)

Technical Sergeant James Tollack, an officer from McGuire Air Force Base in New Jersey, is tasked with transcribing tape recordings from September 11 of the operations floor at NORAD’s Northeast Air Defense Sector (NEADS) in Rome, New York. (9/11 Commission 3/22/2004; 9/11 Commission 7/29/2004; Farmer 2009, pp. 274) On September 11, NEADS was responsible for coordinating the US military’s response to the hijackings. In a corner of its operations floor, four Dictaphone multi-channel tape recorders were recording every radio channel. (Bronner 8/1/2006; Shenon 2008, pp. 203-204) Tollack will later say that NEADS Technical Sergeant Jeremy Powell maybe tells him that personnel at NEADS have already listened to the tapes prior to his arrival there.
Digital Recording Expert Spends Two Weeks Working on Transcripts - Tollack is the resident expert in digital voice recording systems at McGuire Air Force Base and also has experience of doing transcription work. He arrives at NEADS on September 20 and stays there for 11 to 14 days, leaving on either October 1 or October 4. His first day at NEADS is spent on orientation, and so September 21 is his first full day of transcribing. Tollack will later recall that Colonel Robert Marr, the battle commander at NEADS, probably advises him to only transcribe the tapes from September 11 up to around 10:15 a.m., which is about 10 minutes after the fourth hijacked plane, Flight 93, crashed in Pennsylvania. For his first few days at NEADS, Tollack spends 14 to 16 hours per day working on the task. He works at a desk on the operations floor, drafting notes by hand and then typing them out with the assistance of two secretaries.
Transcripts Needed for Investigations - Tollack works directly for Marr, and also reports to Lieutenant Colonel Dawne Deskins, the assistant director of the Sector Operations Control Center. Marr tells Tollack that the transcripts of the tapes are required for investigation purposes. General Ralph Eberhart, the commander of NORAD, tells Tollack the information is needed for a Congressional report or hearing (see (Between September 23 and September 24, 2001)).
Tollack's Work Not Reviewed - While Tollack is at NEADS, no one there reviews his work as he goes through the tapes. (9/11 Commission 3/22/2004) On September 21, one of the tapes is damaged during the transcription process, causing information on it to be lost (see September 21, 2001). (North American Aerospace Defense Command 9/21/2001)
9/11 Commission Not Initially Made Aware of NEADS Tapes - During its investigation of the September 11 attacks, the 9/11 Commission will only learn of the existence of the recordings of the NEADS operations floor in late October 2003 (see Late October 2003), and it subsequently subpoenas NORAD for the tapes (see November 6, 2003). Despite the efforts of Tollack, according to journalist and author Philip Shenon, by the time the Commission receives the tapes, around December 2003, NORAD has still “not prepared transcripts itself” of the tapes’ contents. (Kean and Hamilton 2006, pp. 86-88; Shenon 2008, pp. 203-208)