This page can be viewed at http://www.historycommons.org/entity.jsp?entity=jerry_berger_1

Jerry Berger was a participant or observer in the following events: 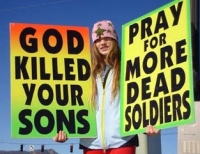 Signs held by a WBC picketer at the funeral of a fallen soldier. [Source: Eagle I Online (.com)]The virulently anti-gay Westboro Baptist Church (WBC) of Topeka, Kansas (see November 27, 1955 and After) begins what it calls its “picketing ministry,” holding controversial protests to raise awareness of the church and gain media attention. The first protest is held at Gage Park, a Topeka park that the WBC claims is a “meeting place” for homosexuals. The protests continue well into 2001. In 2012, the church will claim to have held over 40,000 protests. WBC members attend these protests bearing signs with such slogans as “God Hates Fags,” “God Hates Jews,” “Thank God for Dead Soldiers,” “Thank God for IEDs” [improvised explosive devices], and “Thank God for AIDS.” Protesters often shout vulgar and obscene epithets at mourners. The church protests many local businesses and individuals in Topeka, including picketing one restaurant every day for three years because the owner knowingly hired a lesbian employee. Jerry Berger, the owner of the restaurant, will later say that church leader Fred Phelps promises to “put you out of business” if he does not fire the employee. When Berger refuses, Phelps and the WBC hound him and the restaurant for three years until he sells the restaurant and the employee quits. Phelps and the WBC find the woman in her new job and protest her there, also. The WBC also continues to protest at the restaurant. At least one member, Shirley Phelps-Roper, often brings American flags to protests and allows her children to trample the flags during those protests, engendering even more media attention. (Southern Poverty Law Center 4/2001; Southern Poverty Law Center 4/2001; Southern Poverty Law Center 2012; Anti-Defamation League 2012) The Anti-Defamation League (ADL) will later write that it believes the group’s overriding purpose is to garner publicity for itself. “Every mention of WBC in the media is considered a victory by the group,” it will observe. (Anti-Defamation League 2012)