This page can be viewed at http://www.historycommons.org/entity.jsp?entity=jerry_zovko_1

Jerry Zovko was a participant or observer in the following events: 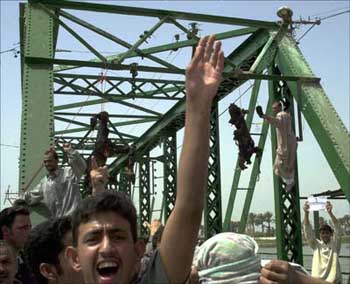 The burned, mutilated corpses of two Blackwater contractors hang from a bridge outside Fallujah while Iraqi civilians celebrate. [Source: NoGW.com]Four employees of the private security firm Blackwater, Jerry Zovko, Wesley Batalona, Scott Helvenston and Michael Teague, are killed by small arms fire while driving through Fallujah. (Neff 7/8/2007) Their bodies are then taken out of their convoy and mutilated by an angry mob. Images of two corpses of the contractors hanging from a bridge over the Euphrates River are sent all over the world. The families of the four slain men later file a lawsuit against Blackwater claiming that the company broke their contract by cutting corners on security costs in order to make a greater profit. The convoy that the Blackwater employees were driving lacked both armor for protection and a rear gunner, making it extremely easy for a few Iraqi gunmen to kill them. There also was an alternate path around Fallujah the men could have taken but did not know about because Blackwater did not conduct a “risk assessment,” which they were contractually obligated to do. (Scahill 5/8/2006) In July 2007, memos from another Blackwater team published in the media blame Blackwater’s Baghdad manager, Tom Powell, for sending the two teams into Fallujah undermanned, underarmed, and without maps (see June 8, 2007).