This page can be viewed at http://www.historycommons.org/entity.jsp?entity=jim_geringer_1

Jim Geringer was a participant or observer in the following events:

October 9, 1998 and After: Question of ‘Hate Crime’ Surrounds Murder of Gay Student

The murder of gay college student Matthew Shepard (see October 9, 1998 and After) triggers a national discussion about hate crimes, centering on the question of whether Shepard’s murder should be classified as such. Shortly after Shepard’s murder, his friends Walt Boulden and Alex Trout tell reporters that Shepard may have been killed because of his homosexuality. “I know in the core of my heart it happened because he revealed he was gay,” Boulden tells a reporter. “And it’s chilling. They targeted him because he was gay.” Boulden and Trout also speak with county law enforcement officials. Kristen Price, the girlfriend of one of Shepard’s assailants, Aaron McKinney, cooperates with police after being charged with being an accessory to the murder (the charges are later reduced); she tells them that McKinney reacted violently to Shepard’s alleged advances. Later, Price will recant that part of her story and say that McKinney’s motive was to rob Shepard. In 2004 she will say: “I don’t think it was a hate crime at all. I never did.” Former Laramie police detective Ben Fritzen will agree, saying: “Matthew Shepard’s sexual preference or sexual orientation certainly wasn’t the motive in the homicide.… If it wasn’t Shepard, they would have found another easy target. What it came down to really is drugs and money and two punks that were out looking for it.” McKinney will tell an ABC News reporter: “I would say it wasn’t a hate crime. All I wanted to do was beat him up and rob him.” He will explain the excessively savage beating he delivered to Shepard as triggered by his methamphetamine abuse. Others disagree. In 1999, Sergeant Rob DeBree, the chief investigator in the case, will scoff at the idea that gay hatred had nothing to do with the crime. “Far from that!” he will say. “They knew damn well he was gay.… It started out as a robbery and burglary, and I sincerely believe the other activity was because he was gay.” Former Laramie police commander Dave O’Malley doesn’t think drug use motivated the attack, either. “I really don’t think [McKinney] was in a methamphetamine-induced rage when this happened,” he will say. “I don’t buy it at all. I feel comfortable in my own heart that they did what they did to Matt because they [had] hatred toward him for being gay.” Shepard’s mother Judy Shepard will agree, saying: “I’m just not buying into that. There were a lot of things going on that night, and hate was one of them, and they murdered my son ultimately. Anything else we find out just doesn’t, just doesn’t change that fact.” McKinney will deny knowing Shepard before the murder, but some townspeople say they saw Shepard and McKinney together in the weeks before the murder, presumably seeing Shepard buying meth from McKinney. (ABC News 11/26/2004)
'Gay Panic Defense' - McKinney’s legal strategy is to use the so-called “gay panic defense,” where assailants justify their actions by claiming they were driven temporarily insane because of their victim’s homosexuality. McKinney’s lawyer Dion Custis will go even farther, claiming that Shepard made a physical advance towards McKinney. “It started because Matthew Shepard grabbed [McKinney’s] balls,” Custis will tell the jury. “It continued because Aaron McKinney was a chronic meth user.” However, McKinney’s fellow assailant Russell Henderson will later admit that Shepard never made any advances towards either of his killers. Henderson will not testify against McKinney, as is arranged, so Custis is free to make the argument to the jury. (Cullen 11/6/1999) Of Henderson, his landlord says: “I perceived him as a follower. I have a hard time imagining him coming up with anything like this on his own. It seems extremely out of character, but sometimes people make really bad choices.” (Brooke 10/16/1998)
Search for Justification - Experts say that the details of the incident fit a larger pattern of anti-gay crimes. Karen Franklin, a forensic psychologist, observes: “Once someone is labeled as homosexual, any glance or conversation by that person is perceived as sexual flirtation. Flirtation, in turn, is viewed as a legitimate reason to assault.” Men like McKinney and Henderson justify their violent assaults on gay men, Franklin notes, by using excuses such as “self-defense” from homosexual overtures, ideological opposition to homosexuality, thrill seeking, and peer approval. (Brooke 10/16/1998)
Presidential Response - President Clinton condemns the killing, saying that “crimes of hate and crimes of violence cannot be tolerated in our country.” Clinton presses Congress to expand the federal hate-crimes law to cover offenses based on disability or sexual orientation. “The public outrage in Laramie and all across America today echoes what we heard at the White House Conference on Hate Crimes last year,” Clinton says. “There is something we can do about this. Congress needs to pass our tough hate crimes legislation. It can do so even before it adjourns, and it should do so.” Governor Jim Geringer (R-WY) demurs when asked if Wyoming should pass similar legislation, saying that he is against giving one group “special rights” over others. (CNN 10/12/1998) Several gay entertainment figures openly declare the murder to be a hate crime. Actress and comedian Ellen DeGeneres, who hosts Shepard’s memorial service in Washington, DC, tells the gathered mourners that she publicly announced her sexual orientation in part “to keep this type of thing from happening.” Gay singer Melissa Etheridge will write a song, “Scarecrow,” as a tribute to Shepard (the title comes from Shepard’s initially being mistaken for a scarecrow when he was found). (Hall and Hall 2006, pp. 575) 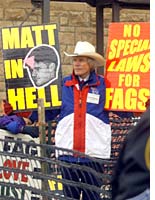 The Reverend Fred Phelps, holding a sign outside Matthew Shepard’s funeral service. [Source: Slate]The funeral for Matthew Shepard, a gay college student brutally murdered by three white supremacists (see October 9, 1998 and After), is held in St. Mark’s Church in Casper, Wyoming. The service is led by the Reverend Anne Kitch. (CNN 10/13/1998; Louie Crew 10/14/1998) The Reverend Fred Phelps of the Westboro Baptist Church in Topeka, Kansas, leads a small delegation of church members in a raucous denunciation of homosexuality at Shepard’s funeral. Phelps and his congregation members have picketed the funerals of gay men for years across the country, holding “God Hates Fags” signs and harassing family members. Governor Jim Geringer (R-WY) says he cannot prevent Phelps from attending the funeral, but vows that the protesters will not be allowed to disrupt it. Phelps’s group, Geringer says, is “just flat not welcome. What we don’t need is a bunch of wing nuts coming in.” For his part, Phelps, who claims he has received multiple death threats after announcing his journey to Laramie, says: “We’re not going to tolerate any violence from these homosexuals. They are the most violent people in the world. Here they are talking about what happened to this poor boy, and they turn around and make death threats against us.” Geringer, the Casper City Council, and several groups of gay activists succeeded in passing a regulation that keeps Phelps and his protesters 50 feet away from church property during the funeral. “[I]t was the best we could accomplish without risking an immediate court injunction for violating constitutional free speech,” reads a statement by the local chapter of the Log Cabin Republicans. “Such an injunction might have allowed Phelps to walk right up to the church property line.” (CNN 10/13/1998; Log Cabin Republicans 10/16/1998) Phelps and his fellow church members picket the funeral with signs reading, “Matt Shepard Rots in Hell,” “AIDS Kills Fags Dead,” and “God Hates Fags.” (Fact-Index 2004) Five years later, Phelps will attempt to erect a marker emblazoned with inflammatory statements about Shepard in a local park, to “commemorate” his death (see October 3, 2003).