This page can be viewed at http://www.historycommons.org/entity.jsp?entity=joel_fitzgibbon_1

Joel Fitzgibbon was a participant or observer in the following events: 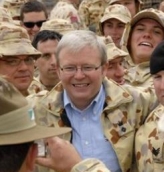 Australian troops at Camp Terendak crowd around newly elected Prime Minister Kevin Rudd during his December 2007 visit to the camp. [Source: Australian Defense Department]The Australian government announces that its entire deployment of 550 troops is leaving Iraq immediately. Australian troops lower the national flag that had flown over their last enclave, Camp Terendak in Talil. The troops will be officially welcomed home on June 28 by Prime Minister Kevin Rudd, who had campaigned on a platform of bringing the nation’s troops home as soon as possible. Australian Defense Minister Joel Fitzgibbon says the withdrawal “closed another chapter in a strong and proud Australian military history.” Australian soldiers had rarely engaged in combat per se, but had protected engineers carrying out reconstruction work, had helped train Iraqi soldiers and police, and had taken part in training Iraqis for counterinsurgency operations. Fitzgibbon calls the decision to withdraw overdue, noting Australian deployments in East Timor and Afghanistan. Former Prime Minister John Howard, who made the unpopular decision to deploy troops to Iraq in support of US and British forces, describes himself as “baffled” by the decision to withdraw, and says that had he been returned to office, “we would not have been bringing them home, we would have been looking at transitioning them from their soon-to-be terminated role to a training role.” Rudd counters by accusing Howard of misleading the country over the necessity of invading Iraq, saying, “Of most concern to this government was the manner in which the decision to go to war was made: the abuse of intelligence information, a failure to disclose to the Australian people the qualified nature of that intelligence.” 300 Australian soldiers will remain in Baghdad to help guard Australian diplomats, and 500 more will remain in the Middle East. (McMahon 6/2/2008; McGuirk 6/2/2008)