This page can be viewed at http://www.historycommons.org/entity.jsp?entity=joel_gilbert_1

Joel Gilbert was a participant or observer in the following events: 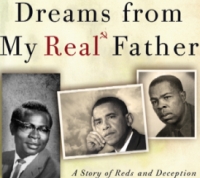 A portion of the cover of the DVD ‘Dreams From My Real Father.’ The subtitle is ‘A Story of Reds and Deception.’ [Source: Opposing Views (.com)]Bill Armistead, the chairman of the Alabama Republican Party, publicly claims President Obama is the illegitimate son of Frank Marshall Davis, an American labor activist and organizer for the Communist Party USA. Armistead makes his claim to a meeting of the Eastern Shore Republican Women in Fairhope, Alabama, where he recommends a movie entitled Dreams From My Real Father, a play on Obama’s 1995 memoir, Dreams From My Father. The film was directed by Joel Gilbert, who has described it thusly: “Admittedly, at age 18, Obama arrived at Occidental College a committed revolutionary Marxist. Dreams from My Real Father presents the case that Frank Marshall Davis, a Communist Party USA organizer and propagandist, was Obama’s real father, both biological and ideological, and indoctrinated Obama with a political foundation in Marxism and an anti-white world view.” Armistead tells the audience: “We have to win this election. This is about our country. Our country will not be the same. I’m convinced, if Obama wins, our children and grandchildren will not live under the same conditions that we’ve lived in these wonderful years. Obama has a different ideology than we do.” He then answers a question from the audience about another movie critical of Obama, 2016: Obama’s America, by conservative pundit and author Dinesh D’Souza (see September 12, 2010 and September 16, 2010). Armistead replies: “If you haven’t seen it, you should. But I’m going to tell you about another movie. The name of it is Dreams From My Real Father. That is absolutely frightening. I’ve seen it. I verified that it is factual, all of it. People can determine.” Armistead does not explain how he has “verified” the accuracy of the movie’s claims. The story of Armistead’s comments is quickly picked up by local and national press outlets, including Salon and TPM Muckraker, which say that Armistead has gone “birther.” The reference is to discredited conspiracy theories claiming that Obama is not a naturally-born American citizen. Miranda Blue, a spokesperson for the liberal People for the American Way (PFAW), says the film is a “fringe birther movie” and adds, “This is the first we’ve heard of a political leader embracing… Gilbert’s conspiracy theory.” (Talbot 9/20/2012) According to Blue, “A trailer for the film cuts to various right-wing bogeymen including Jeremiah Wright, Bill Ayers, and ACORN in between misleadingly edited snippets of speeches by the president and Michelle Obama.” She writes, “Gilbert’s film has divided the birther movement, since its assertion that Davis is Obama’s real father would seem to be incompatible with the theory that the president was born in Kenya.” Jerome Corsi, a writer for the conservative WorldNetDaily and a veteran “birther” (see August 1, 2008 and After, July 21, 2009, and September 21, 2010), supports the film, but California lawyer and “birther” Orly Taitz (see August 1-4, 2009, October 29, 2009, and April 27, 2011) says Corsi is “trying to kill the case by making up an American citizen father for Obama.” The film has reached a wide audience, with conservative media outlets such as the New York Post promoting it and Gilbert sending a million copies of the film on DVD to voters in Ohio. Gilbert plans to send another million copies to voters in other swing states. Gilbert says the mainstream media is ignoring the film “because they support national health care.” Gilbert told a recent National Press Club audience that Obama and his political advisor David Axelrod are both “red diaper babies,” children born of Communist parents and brought up to advance the cause. Obama, he said, is pursuing what he says was Davis’s dream of imposing a Stalinist-Marxist dictatorship on America, and that Obama worked with the now-defunct Association of Community Organizations for Reform Now (ACORN) to cause the housing crisis as part of a plan to, he said, “use minorities and the poor to collapse capitalism.” (Blue 9/20/2012; Rayfield 9/20/2012) The film is narrated by an Obama impersonator. It contains a disclaimer noting that many of the scenes are “re-creations of probable events, using reasoned logic, speculation, and approximated conversations.” (Michel 9/21/2012) The tale of Obama being fathered by Davis was promulgated most recently by conservative agitator Andy Martin (see Before October 27, 2008) and other far-right sources.