This page can be viewed at http://www.historycommons.org/entity.jsp?entity=john_garrett_1

John Garrett was a participant or observer in the following events:

Early 2007: Fox Analyst Asks How He Can Help Promote Surge

John Garrett, a retired Marine colonel, Fox News analyst (see April 20, 2008 and Early 2002 and Beyond), and lobbyist who helps defense firms win Pentagon contracts in Iraq, contacts the Pentagon just before President Bush announces the “surge” in Iraq (see January 10, 2007). Garrett tells Pentagon officials, “Please let me know if you have any specific points you want covered or that you would prefer to downplay.” (Barstow 4/20/2008) 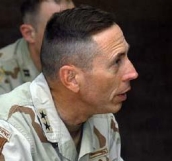 David Petraeus. [Source: Princeton ROTC]General David Petraeus, the newly named commander of CENTCOM and the supreme commander of US forces in the Middle East, takes time out from testifying to Congress to speak in a conference call to a group of the Pentagon’s carefully groomed “military analysts,” whom it uses regularly to promote the occupation of Iraq and sell the administration’s Middle East policies (see April 20, 2008 and Early 2002 and Beyond). John Garrett, a retired Marine colonel and Fox News analyst, tells Petraeus to “keep up the great work.” In an interview, Garrett reaffirms his intention to continue selling the occupation of Iraq: “Hey, anything we can do to help.” (Barstow 4/20/2008) 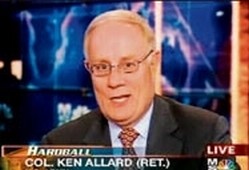 Former NBC analyst Kenneth Allard. [Source: New York Times]The New York Times receives 8,000 pages of Pentagon e-mail messages, transcripts and records through a lawsuit. It subsequently reports on a systematic and highly orchestrated “psyops” (psychological operations) media campaign waged by the Defense Department against the US citizenry, using the American media to achieve their objectives. At the forefront of this information manipulation campaign is a small cadre of retired military officers known to millions of TV and radio news audience members as “military analysts.” These “independent” analysts appear on thousands of news and opinion broadcasts specifically to generate favorable media coverage of the Bush administration’s wartime performance. The group of officers are familiar faces to those who get their news from television and radio, billed as independent analysts whose long careers enable them to give what New York Times reporter David Barstow calls “authoritative and unfettered judgments about the most pressing issues of the post-Sept. 11 world.” However, the analysts are not nearly as independent as the Pentagon would like for Americans to believe. Barstow writes: “[T]he Bush administration has used its control over access and information in an effort to transform the analysts into a kind of media Trojan horse—an instrument intended to shape terrorism coverage from inside the major TV and radio networks.… These records reveal a symbiotic relationship where the usual dividing lines between government and journalism have been obliterated.”
Administration 'Surrogates' - The documents repeatedly refer to the analysts as “message force multipliers” or “surrogates” who can be counted on to deliver administration “themes and messages” to millions of Americans “in the form of their own opinions.” According to the records, the administration routinely uses the analysts as, in Barstow’s words, “a rapid reaction force to rebut what it viewed as critical news coverage, some of it by the networks’ own Pentagon correspondents.” When news articles revealed that US troops in Iraq were dying because of inadequate body armor (see March 2003 and After), a senior Pentagon official wrote to his colleagues, “I think our analysts—properly armed—can push back in that arena.” In 2005, Ten analysts were flown to Guantanamo to counter charges that prisoners were being treated inhumanely; the analysts quickly and enthusiastically repeated their talking points in a variety of television and radio broadcasts (see June 24-25, 2005).
Ties to Defense Industry - Most of the analysts, Barstow writes, have deep and complex “ties to military contractors vested in the very war policies they are asked to assess on air.” The analysts and the networks almost never reveal these business relationships to their viewers; sometimes even the networks are unaware of just how deep those business connections extend. Between then, the fifty or so analysts “represent more than 150 military contractors either as lobbyists, senior executives, board members or consultants. The companies include defense heavyweights, but also scores of smaller companies, all part of a vast assemblage of contractors scrambling for hundreds of billions in military business generated by the administration’s war on terror. It is a furious competition, one in which inside information and easy access to senior officials are highly prized.” Some of the analysts admit to using their special access to garner marketing, networking, and business opportunities. John Garrett, a retired Marine colonel and Fox News analyst, is also a lobbyist at Patton Boggs who helps firms win Pentagon contracts, including from Iraq. In company promotional materials, Garrett says that as a military analyst he “is privy to weekly access and briefings with the secretary of defense, chairman of the Joint Chiefs of Staff and other high level policy makers in the administration.” One client told investors that Garrett’s access and experience helps him “to know in advance—and in detail—how best to meet the needs” of the Defense Department and other agencies. Garrett calls this an inevitable overlap between his various roles, and says that in general, “That’s good for everybody.”
Exclusive Access to White House, Defense Officials - The analysts have been granted unprecedented levels of access to the White House and the Pentagon, including:

hundreds of private briefings with senior military officials, including many with power over contracting and budget matters;

private briefings with senior White House, State Department, and Justice Department officials, including Vice President Dick Cheney, former Attorney General Alberto Gonzales, and National Security Adviser Stephen Hadley.
Conversely, analysts who do not cooperate take a risk. “You’ll lose all access,” says CBS military analyst and defense industry lobbyist Jeffrey McCausland.
Quid Pro Quo - Fox News analyst and retired Army lieutenant colenel Timur Eads, who is vice president of government relations for Blackbird Technologies, a rapidly growing military contractor, later says, “We knew we had extraordinary access.” Eads confirms that he and other analysts often held off on criticizing the administration for fear that “some four-star [general] could call up and say, ‘Kill that contract.’” Eads believes that he and the other analysts were misled about the Iraqi security forces, calling the Pentagon’s briefings about those forces’ readiness a “snow job.” But Eads said nothing about his doubts on television. His explanation: “Human nature.” Several analysts recall their own “quid pro quo” for the Pentagon in the months before the invasion (see Early 2003). And some analysts were far more aboveboard in offering quid pro quos for their media appearances. Retired Army general Robert Scales, Jr, an analyst for Fox News and National Public Radio, and whose consulting company advises several firms on weapons and tactics used in Iraq, asked for high-level Pentagon briefings in 2006. In an e-mail, he told officials: “Recall the stuff I did after my last visit. I will do the same this time.”
Repeating White House Talking Points - In return, the analysts have, almost to a man, echoed administration talking points about Iraq, Afghanistan, and Iran, even when some of them believed the information they were given was false or inflated. Some now acknowledge they did so—and continue to do so—for fear of losing their access, which in turn jeopardizes their business relationships. Some now regret their participation in the propoganda effort, and admit they were used as puppets while pretending to be independent military analysts. Bevelacqua says, “It was them saying, ‘We need to stick our hands up your back and move your mouth for you.’” Former NBC analyst Kenneth Allard, who has taught information warfare at the National Defense University, calls the campaign a sophisticated information operation aimed, not at foreign governments or hostile populaces, but against the American people. “This was a coherent, active policy,” he says (see Late 2006). The Pentagon denies using the military analysts for propaganda purposes, with spokesman Bryan Whitman saying it was “nothing other than an earnest attempt to inform the American people.” It is “a bit incredible” to think retired military officers could be “wound up” and turned into “puppets of the Defense Department,” Whitman says. And other analysts, such as McCausland, say that they never allowed their outside business interests to affect their on-air commentaries. “I’m not here representing the administration,” McCausland says. Some say they used their positions to even criticize the war in Iraq. But according to a close analysis of their performances by a private firm retained by the Pentagon to evaluate the analysts, they performed to the Pentagon’s complete satisfaction (see 2005 and Beyond).
Enthusiastic Cooperation - The analysts are paid between $500 and $1,000 per appearance by the networks, but, according to the transcripts, they often speak as if the networks and the media in general are the enemy. They often speak of themselves as operating behind enemy lines. Some offered the Pentagon advice on how to outmaneuver the networks, or, as one said to then-Defense Secretary Donald Rumsfeld, “the Chris Matthewses and the Wolf Blitzers of the world.” Some alerted Pentagon officials of planned news stories. Some sent copies of their private correspondence with network executives to the Pentagon. Many enthusiastically echoed and even added to administration talking points (see Early 2007). (Barstow 4/20/2008) Several analysts say that based on a Pentagon briefing, they would then pitch an idea for a segment to a producer or network booker. Sometimes, the analysts claim, they even helped write the questions for the anchors to ask during a segment. (Barstow 4/21/2008)
Consequences and Repercussions - Some of the analysts are dismayed to learn that they were described as reliable “surrogates” in Pentagon documents, and some deny that their Pentagon briefings were anything but, in the words of retired Army general and CNN analyst David Grange, “upfront information.” Others note that they sometimes disagreed with the administration on the air. Scales claims, “None of us drink the Kool-Aid.” Others deny using their access for business gain. Retired general Carlton Shepperd says that the two are “[n]ot related at all.” But not all of the analysts disagree with the perception that they are little more than water carriers for the Pentagon. Several recall being chewed out by irate defense officials minutes after their broadcasts, and one, retired Marine colonel Wiliam Cowan of Fox News, recalls being fired—by the Pentagon, not by Fox—from his analyst position after issuing a mild criticism of the Pentagon’s war strategies (see August 3-4, 2005). (Barstow 4/20/2008)