This page can be viewed at http://www.historycommons.org/entity.jsp?entity=johnny_isakson_1

Johnny Isakson was a participant or observer in the following events: 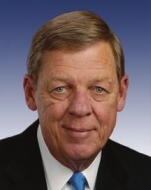 Johnny Isakson. [Source: Washington Post]Senator Johnny Isakson (R-GA), one of the foremost advocates of expanding Medicare’s end-of-life planning coverage, responds sharply to suggestions by former Alaska Governor Sarah Palin (R-AK) and others that the Democrats’ health care reform proposal would create “death panels” for the forcible euthanasia of citizens deemed “less productive” or “undesirable” (see August 7, 2009). Isakson, who co-sponsored the 2007 Medicare End-of-Life Planning Act and has proposed a similar amendment to the House’s language in the Senate version of the health care bill, notes that the bill would lead to the funding of voluntary end-of-life counseling sessions between doctors and their patients, and would allow patients to choose the level of care they would receive as their lives come to a close (see July 23, 2009 and July 23, 2009). He calls Palin’s interpretation of the legislation “nuts.” Isakson says: “In the health care debate mark-up, one of the things I talked about was that the most money spent on anyone is spent usually in the last 60 days of life and that’s because an individual is not in a capacity to make decisions for themselves. So rather than getting into a situation where the government makes those decisions, if everyone had an end-of-life directive or what we call in Georgia ‘durable power of attorney,’ you could instruct at a time of sound mind and body what you want to happen in an event where you were in difficult circumstances where you’re unable to make those decisions. This has been an issue for 35 years. All 50 states now have either durable powers of attorney or end-of-life directives and it’s to protect children or a spouse from being put into a situation where they have to make a terrible decision as well as physicians from being put into a position where they have to practice defensive medicine because of the trial lawyers. It’s just better for an individual to be able to clearly delineate what they want done in various sets of circumstances at the end of their life.… It empowers you to be able to make decisions at a difficult time rather than having the government making them for you.” He says he has no idea how Palin and others have become “so mixed up” on the concept. (Klein 8/10/2009) Liberal news and advocacy Web site Think Progress notes that another Republican senator, Susan Collins (R-ME), supports a similar provision to Isakson’s amendment. (Carlile 8/11/2009) The Washington Monthly’s Steve Benen notes that Isakson is a “deep-dyed” conservative, and writes, “Assorted wingnuts and teabaggers may not believe the administration, Democrats, objective news sources, or the plain black-and-white text of the legislation, but they should at least be willing to consider reality from one of the Senate’s most conservative members.” (Benen 8/11/2009)

Senator Johnny Isakson (R-GA) denounces comments by President Obama (see August 11, 2009) and press secretary Robert Gibbs that, he says, implies he supports some version of the Democrats’ health care reform legislation. The day before, Isakson had told reporters that claims by former Governor Sarah Palin (R-AK) and others about so-called “death panels” were “nuts” (see August 10, 2009). Isakson says he “vehemently opposes” both the House and Senate versions of reform legislation, and denies that he drafted language in the bill calling for the government to expand Medicare and provide for “end-of-life counseling.” In a statement, he says: “I categorically oppose the House bill and find it incredulous that the White House and others would use my amendment as a scapegoat for their misguided policies. My Senate amendment simply puts health care choices back in the hands of the individual and allows them to consider if they so choose a living will or durable power of attorney. The House provision is merely another ill-advised attempt at more government mandates, more government intrusion, and more government involvement in what should be an individual choice.” (US Senate 8/11/2009) 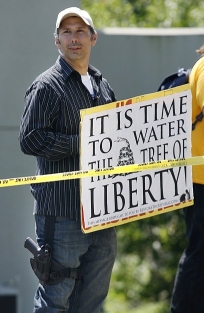 August 12, 2009: Republican Senator: Health Care Reform Must Not Lead to ‘Pull[ing] the Plug on Grandma’ 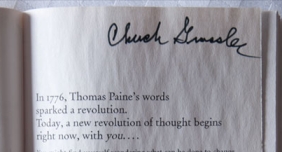 Investigative journalists find that at least seven prominent Republicans who now denounce what they call “death panels” and claim that the Democrats’ health care legislation will lead to the untimely deaths of US senior citizens (see November 23, 2008, January 27, 2009, February 9, 2009, February 11, 2009, February 18, 2009, May 13, 2009, June 24, 2009, June 25, 2009, July 10, 2009, July 16, 2009, July 17, 2009, July 21, 2009, July 23, 2009, July 23, 2009, July 23, 2009, July 23-24, 2009, July 24, 2009, July 28, 2009, July 28, 2009, July 28, 2009, July 31, 2009 - August 12, 2009, August 6, 2009, August 7, 2009, August 10, 2009, August 10, 2009, Shortly Before August 10, 2009, August 11, 2009, August 11, 2009, August 12, 2009, August 12, 2009, August 12, 2009, and August 13, 2009) actually supported proposals similar to the legislation’s provision for government-funded “end-of-life counseling.”
Palin, Gingrich Supported 'Advance Directives' - In August 2008, Sarah Palin (R-AK), then the governor of Alaska, proclaimed “Healthcare Decisions Day.” She urged public health care facilities to provide more information about so-called “advance directives,” and said that seniors must be informed of all their options as the end of their lives draw near. The proclamation has recently been deleted from the Alaska governor’s Web site. Reporter Matt Taibbi notes that in late 2008 and early 2009, former House Speaker Newt Gingrich (R-GA) endorsed an aggressive “end of life” program from a Wisconsin health care provider, Gundersen Lutheran Health System, and wrote, “If Gundersen’s approach was used to care for the approximately 4.5 million Medicare beneficiaries who die every year, Medicare could save more than $33 billion a year.” Taibbi accuses Gingrich of “lying [about death panels] in order to scare a bunch of old people.” (Matt Taibbi 8/12/2009; Fang 8/13/2009)
Five Others Voted for End-of-Life Counseling - In 2003, five Republicans who now oppose the supposed “death panels” voted in favor of an almost-identical provision in that year’s Medicare reform legislation. Representatives John Boehner (R-OH), Thaddeus McCotter (R-MI), Johnny Isakson (R-GA), and John Mica (R-FL), and Senator Chuck Grassley (R-IA) all voted for the bill, which provided coverage for “counseling the beneficiary with respect to end-of-life issues and care options, and advising the beneficiary regarding advanced care planning.” Boehner, McCotter, and Mica have claimed that the current attempt at health care reform would lead to “government-encouraged euthanasia.” Isakson opposes the House legislation because it allows the “government to incentivize doctors by offering them money to conduct end-of-life counseling.” And Grassley told constituents that they are “right to fear” that government could “decide when to pull the plug on Grandma” (see August 12, 2009). (Sargent 8/14/2009)
Widespread Republican Support in 2003 - In all, 202 House Republicans and 42 Republican Senators voted for the Medicare bill. MSNBC host Rachel Maddow will say: “And there was not a peep about then-President Bush having a secret plan to kill old people. Bottom line? Either Republicans like Chuck Grassley and John Boehner and John Mica have totally changed their minds about whether living wills are really a secret plot to kill old people, or they voted for something just a few years ago that they actually thought was a secret plot to kill old people. Take your choice.” (MSNBC 8/17/2009)

A virulent anti-gay post on a gay rights blog comes from the office of Senator Saxby Chambliss (R-GA), according to that office. Hours after Senate Republicans blocked a vote on repealing the military’s “don’t ask, don’t tell” (DADT) policy regarding gays in the service, a poster only identifying himself as “Jimmy” visits the gay rights blog Joe.My.God and posts, “All f_ggots must die.” Blog owner Joe Jervis, a gay rights activist, checks the IP (Internet protocol) address of the commenter and finds that it comes from a US Senate address in Atlanta, Georgia. The office of Senator Johnny Isakson (R-GA) tells the Atlanta Journal-Constitution that the comment did not come from his office. Chambliss’s office responds with the following statement: “We have seen the allegations and are moving quickly to understand the facts. This office has not and will not tolerate any activity of the sort alleged. Once we have ascertained whether these claims are true, we will take the appropriate steps.” (Galloway 9/21/2010; Joe Jervis 9/21/2010; Sladja 9/22/2010) The day after the post is made, Chambliss issues a statement admitting that the post came from his office, though his staff has not yet determined who made it. Chambliss’s office makes the admission to a Journal-Constitution reporter, and says it has turned the matter over to the Senate’s sergeant at arms. (Galloway 9/22/2010; Lach 9/22/2010) Days later, Chambliss will fire the staffer, though he will continue to withhold the staffer’s identity. “The office of the Senate sergeant at arms has concluded its investigation, and I responded to that report immediately with the removal of a member of my staff,” Chambliss says in a statement. “I have called Mr. Jervis, the blog’s author, and apologized to him personally, and I am sorry for the hurt this incident has caused. Regardless of one’s position on issues and policies, such comments are simply unacceptable, are not befitting those who work in the US Senate, and I will not tolerate them from my staff.” (Slajda 9/30/2010)