This page can be viewed at http://www.historycommons.org/entity.jsp?entity=jon_nordby_1

Jon Nordby was a participant or observer in the following events:

March 24-May 11, 2004: Al-Zarqawi Blamed for Beheading of US Citizen, but Video Raises Many Questions 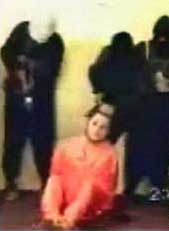 A video still of Nick Berg being tormented by his captors in Iraq. [Source: Reuters]A video of US citizen Nick Berg being beheaded in Iraq is made public and causes widespread horror and outrage around the world. Berg had been working in Iraq with private companies installing communications towers. On March 24, 2004, he is taken into custody. Berg’s family is sent e-mails confirming that he is in US custody (however, US officials will later claim they were erroneously notified and he was in Iraqi government custody instead). The official reasons for his arrest are “lack of documentation” and “suspicious activities.” Regardless of who is holding him, it is not disputed that he is visited three times by the FBI while being held. On April 5, the Berg family launches an action against the US military for false imprisonment, and the next day Berg is released. Berg stays in a hotel in Baghdad for the next few days, and tells a hotel guest that he had been held in a jail with US soldiers as guards. His family last hears of him on April 9, when he tells them he is going to try to leave Iraq. Then, nearly a month later on May 8, his headless body is found dumped on a Baghdad roadside. Three days after that, on May 11, the video of his beheading is broadcast. (Neville 5/29/2004; National Public Radio 8/14/2004) The video shows five masked men taunting and then beheading Berg, and one of them claims to be Islamist militant leader Abu Musab al-Zarqawi. Two days later, a CIA official says, “After the intelligence community conducted a technical analysis of the… video, the CIA assesses with high probability that the speaker on the tape is Abu Musab al-Zarqawi, and that person is shown decapitating American citizen Nicholas Berg.” (BBC 5/13/2004) However, many doubts about the video and the identity of al-Zarqawi surface:

Berg is seen wearing an orange jumpsuit typically worn by detainees in US custody. At the start of the video, he speaks directly to the camera in a relaxed way. The Sydney Morning Herald will later comment, “It is highly likely that this segment is edited from the interrogation of Berg during his 13 days of custody.”

Then the video cuts to scenes including the five masked men. But their Arabic is heavily accented in Russian, Jordanian, and Egyptian. One says “do it quickly” in Russian. A voice also seems to ask in English, “How will it be done?” Glimpses of their skin look white. (Neville 5/29/2004)

The masked man identified as al-Zarqawi does not speak with a Jordanian accent even though al-Zarqawi is Jordanian. CNN staff familiar with al-Zarqawi’s voice claim the voice does not sound like his. (CNN 5/12/2004; Neville 5/29/2004)

Berg is then decapitated, but there is very little blood. Dr John Simpson, executive director for surgical affairs at the Royal Australasian College of Surgeons, says, “I would have thought that all the people in the vicinity would have been covered in blood, in a matter of seconds… if it [the video] was genuine.” Forensic death expert Jon Nordby of the American Board of Medicolegal Death Investigators suggests that the beheading was staged and Berg was already dead. He also suggests that Berg appears to be heavily drugged in earlier parts of the video. (Goldstein 5/22/2004) The Herald comments, “The scream is wildly out of sync, sounds female, and is obviously dubbed.” (Neville 5/29/2004)

Al-Zarqawi is the one shown cutting Berg’s throat with a knife, and uses his right hand to do so. But people who spent time in prison with al-Zarqawi and knew him well claim that he was left handed. (Gettleman 7/13/2004)

The timing of the video also raises suspicions, as it is broadcast just two weeks after the Abu Ghraib prison abuse scandal is exposed, and the shock of the beheadings cause some to claim a moral relativism to justify the US military’s abusive behavior towards detainees. (Neville 5/29/2004)

The London Times comments that “The CIA’s insistence that al-Zarqawi was responsible appears based on the scantiest of evidence.… Sound experts have speculated that the voice might have been dubbed on.” Further, “There are discrepancies in the times on the video frames.” (Allen-Mills and Fielding 5/23/2004)

No autopsy is performed on Berg’s body, nor is there any determination of the time of his death. (Neville 5/29/2004)

No proper investigation of the circumstances surrounding his death is ever conducted. For instance, the US military will tell Berg’s family that they could find no evidence of Berg’s last days in a Baghdad hotel and that no Westerner stayed in that hotel for weeks. But the Washington Post was able to get a copy of the hotel register with Berg’s name on it, along with the date of his checkout, a list of the things he left in his room, and the exact words he said as he left the hotel. (National Public Radio 8/14/2004)
It will later be reported that the US military was conducting a propaganda campaign to inflate the importance of al-Zarqawi (see April 10, 2006), but it is unknown if Berg’s death was somehow related to this campaign.