This page can be viewed at http://www.historycommons.org/entity.jsp?entity=judy_bachrach_1

Judy Bachrach was a participant or observer in the following events: 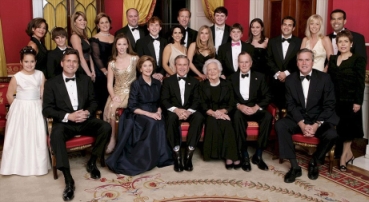 A Bush family photo taken during the inaugural ceremonies. [Source: Cider Press Hill]President Bush is inaugurated for his second term. (White House 1/20/2005) Author and media critic Frank Rich will observe that Bush’s inauguration is a four-day, $40 million media extravaganza designed to “enhance the White House’s portrayal of the war in Iraq.” The official theme is “Celebrating Freedom, Honoring Service.” Rich will write, “The trick for its production was to market the military effort while keeping all of its costs off-screen so that no unpleasantness or difficult questions… might spoil the party or Bush’s message of victory around the corner.” The ceremonies are ostensibly to honor the military men and women who have served the country, and are still serving, but during his inaugural address, Bush never says the word “Iraq.” The word is hardly mentioned at the lavish ball thrown for Bush’s Christian supporters at Washington’s Ritz-Carlton hotel. And the press, especially the network and cable outlets, cooperates, running breathless takes on the sumptuous festivities; Rich will write, “Television’s ceremonial coverage of the inauguration, much of which resembled the martial pageantry broadcast by state-owned networks in banana republics, dutifully parroted the White House message that the four-day bacchanal was a salute to the troops.” One of the few dissenters, Vanity Fair writer Judy Bachrach, observes on Fox News that the military ball and prayer service will not keep troops “safe and warm” in their “flimsy” Humvees in Iraq; after a commercial break, Bachrach is no longer on set. One particular “salute to the troops,” the “Heroes Red, White, and Blue Inaugural Ball,” is not televised, and rightly so, Rich will write, calling it “surreal.” Attendees include Defense Secretary Donald Rumsfeld and his deputy, Paul Wolfowitz, and Fox News commentator Geraldo Rivera, who jokingly equates his status as “overpaid” reporter with “underpaid hero[es]” in battle. (The audience, largely made up of injured soldiers from Walter Reed Army Medical Center and Bethesda Naval Hospital, respond to Rivera’s humor with “deafening silence,” according to one Washington Post report.) Rich points out the irony of the evening’s main entertainment act, Nile Rodgers and Chic, who “sang the lyrics ‘Clap your hands, hoo!’ and ‘Dance to the beat’ to soldiers who had lost hands and legs.” (Rich 2006, pp. 159-160)