This page can be viewed at http://www.historycommons.org/entity.jsp?entity=kaspudu_sendirian_berhad_1

Kaspudu Sendirian Berhad was a participant or observer in the following events: 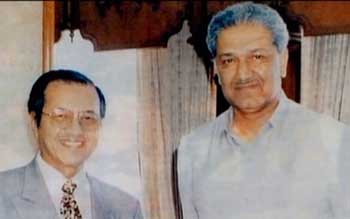 A. Q: Khan (right) and Mahathir bin Mohamad, Prime Minister of Malaysia from 1981 to 2003 (left). [Source: CBC]A Sri Lankan named Bukhary Sayed Abu Tahir is accused by President Bush of being the chief financial officer for an international nuclear black market linked to A. Q. Khan, the so-called father of Pakistan’s nuclear bomb. Tahir sat on the board of Kaspudu Sendirian Berhad, which is owned by the Malaysian prime minister’s son, Kamaluddin Abdullah. The Associated Press claims that a search of publicly accessible files revealed the paper trail that outlines links between Abdullah and Abu Tahir. The paperwork revealed that they were both executives at Kaspudu Sendirian Berhad when Tahir made a deal for Scomi Precision Engineering to build components that Western intelligence sources claim were for use in Libya’s nuclear program. The Scomi Group fulfilled a $3.5 million manufacturing contract for machine parts negotiated by Tahir. Scomi officials say they did not know what the parts were for, while nonproliferation authorities claim they were for 14 centrifuges. US officials insist the components, tubes made up of thousands of small pieces, could only be used in a uranium enrichment program. A Scomi spokeswoman insisted that the company was told the parts were for the oil and gas industry. After the revelation, Abdullah severs ties to Tahir. Malaysian police say neither Tahir or Scomi have committed any crime and no arrests have been made, which the official government report backed up. President Bush has accused Tahir of using a Dubai based company called Gulf Technical Industries as a front for Khan’s network. (Malaysia 2/21/2004; Elegant and Ramakhrishnan 2/16/2005; CNN 2/18/2005)